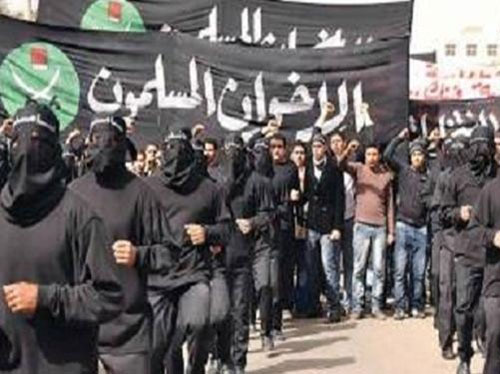 Obama refuses to identify the Muslim Brotherhood as a terrorist organization, while the same jihadist organization is currently and continuously participating in blatant acts of terrorism, to include bomb making.

In a shocking admission, Egyptian General Abdel Fatah el-Sisi has claimed that in the days prior to the removal of Mohammed Mursi from power last year, the Muslim Brotherhood’s Deputy Supreme Guide met with him for 45 minutes and levied a very serious threat. Khairat al-Shater told el-Sisi that if Mursi was removed from power, terrorists would be imported from Syria, Libya, and Afghanistan to fight Egyptians.

In an interview with CBC, el-Sisi relayed his response to al-Shater (translated):

“I responded to the threats of al-Shater very clearly. I told him that any man who raises his weapon to face our army will be removed from the face of the earth.”

Notwithstanding the threats to el-Sisi, when al-Shater revealed his intentions, he revealed a strategy that amounts to a carbon copy of what’s going on in Syria today. Foreign terrorists are being imported into that country in an attempt to remove Bashar al-Assad. Had el-Sisi not intervened, the fate of Egypt would be much worse today.

To further bolster el-Sisi’s claims, Shoebat.com obtained from Middle Eastern sources the case of a terrorist recently arrested in Egypt which was never told in western media. According to reports, this terrorist – Wael A. A. – was arrested in Egypt and is accused of fighting jihad in Syria before traveling to Egypt where he was to carry out terrorist operations. Under questioning, Wael is said to have explained that he went to Syria two years ago through Turkey.

It was reported further that he – and others like him – were paid salaries via the Muslim Brotherhood, after he left for Syria two years ago.

In an Arabic news report, it was revealed that al-Shater’s official driver was implicated in a terrorist attack (translated):

“One child was killed and two were injured as an explosion resulting from a bomb being manufactured in the house of Khairat al-Shater’s private driver, Walid Iz Al-Rijal Kzizieyeh. A relative of the driver was killed in the explosion.”

In this video (at the :30 mark), you can view the aftermath of the explosion:

At this point, it’s worth referencing EXHIBIT B and Addendum T of our “Ironclad” Report again, which makes the case that Egypt was involved in those attacks. Addendum T concerns evidence that under the Mursi regime, al-Shater was involved in trafficking weapons between Sudan, Libya, and Syria, EXHIBIT B is a one-page Libyan intelligence document that details the arrest of several Egyptians in connection with the Benghazi attack. The case of Wael A.A. further bolsters that Exhibit because both point to terrorist trafficking.

Turkey remains a key nation state. It was Turkey’s Consul General Ali Sait Akin who met with Ambassador Christopher Stevens about one hour before the Ambassador’s death. The Egyptian connection to Benghazi, al-Shater’s efforts to export terrorists and weapons, and Turkey’s palpable interest in reinstating the Muslim Brotherhood in Egypt make the Benghazi attacks more relevant.

Despite, all of these revelations about the Muslim Brotherhood’s support for terrorism in Egypt and elsewhere, the Obama administration has been in support of releasing Muslim Brotherhood figures. Here is State Department spokesman Jen Psaki in the days after Mursi’s removal, calling for his release as well as other Brotherhood leaders who were victims of ‘politically motivated’ arrests (beginning to the 1:15 mark):

Since Mursi’s removal, Turkey has been working aggressively behind the scenes to reinstate the Muslim Brotherhood in Egypt, as Shoebat.com has reported. While al-Shater is in prison, the Turkish government has been doing its best to carry out his threats. As Shoebat.com reported reported last year, Turkey’s ambassador to Egypt was reportedly expelled from the host country for “interference” in Egyptian affairs.

Shoebat.com has also reported on the great lengths Turkey’s Prime Minister Recep Tayyip Erdogan is willing to go in terms of propaganda campaigns designed to generate outrage among its people. The expectation is that Turkey will bring the Muslim Brotherhood back in Egypt, with fury.

Earlier this month it was revealed that army drills between Russia and Egypt were set to begin after a Russian delegation met with Egyptian military officials. While reports are focused on the U.S. losing influence in Egypt while Russia is gaining influence, the under-reported story is the Obama administration’s strengthening alliance with Turkey, which seeks to vigorously do all it can to put the Muslim Brotherhood back in power in Egypt.

That is something the Obama administration appears to want as well.

Ben Barrack contributed to this article.