Devoid of truth, context and history, the Pope turns himself over to the “Palestinian” libel. Grotesque.

Across the world his people are subjugated, oppressed and slaughtered under Islamic law, while he does the bidding of their executioners.

Pope chooses to pray in front of large graffiti comparing Bethlehem to the Warsaw Ghetto, By Tom Gross, May 25, 2014 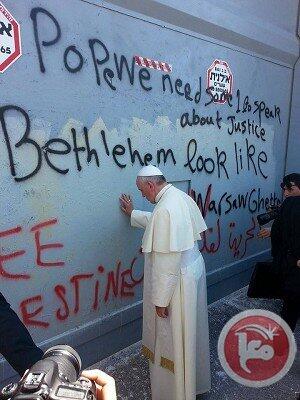 THE POPE, PALESTINE AND THE HOLOCAUST

Many Western media outlets have today highlighted the fact that the pope began his Middle East tour by praying at the small section of Israel’s security barrier that is actually a wall; the rest of the protective barrier is wire-mesh. (The security barrier, which has saved countless lives, was built to protect Israelis after some 1000 civilians were killed by suicide bombers.)

But none of the Western media I have seen have drawn attention to the exact spot that the Pope chose to pray: in front of large graffiti comparing Bethlehem to the Warsaw Ghetto.

The photo above is from the main EU-funded Palestinian media outlet, the Maan news agency. (There is another version of this photo below.)

(1) The working definition of anti-Semitism formulated by the EU and others includes comparing Israel with Nazi Germany. Only yesterday, Israel’s prime minister was among those to point out that the atmosphere of incitement against Israel was a probable contributing factor in attacks such as the one in which four Jews (two Israeli tourists and a French woman, and a young Belgian man working at the museum) were shot dead at the Jewish museum in Brussels yesterday. Two other Jews were attacked and struck with metal objects outside a Paris synagogue last night, just hours after the Brussels shooting.

(2) 400,000 Jews were herded into the Warsaw Ghetto and those who weren’t beaten or starved to death there, were taken to be exterminated at nearby camps. By contrast, Bethlehem is a relatively prosperous town where restaurants and juice bars are packed, and BMWs, Mercedes and Humvees compete for parking spaces in the center or town.

(Yes, there is of course a political problem between Israel and the Palestinian Authority, and one day, one hopes, the security barrier can be removed without its removal leading to increased terrorism, but this has nothing to do with the Warsaw Ghetto. One wonders why the Pope’s Vatican handlers were eager to choose that spot – or are so insensitive as to allow the Palestinian Authority to guide the Pontiff to that spot.)

(3) The Pope represents an organization, the Vatican, which even today, after seven decades of repeated appeals, is still refusing to make public its wartime archives detailing the full extent of its collaboration with the Nazis before, during and after the Holocaust.

What is known is that the Vatican helped several leading Nazi war criminals escape after the war, including Auschwitz doctor Josef Mengele (responsible for barbaric experiments without anesthetic on children) and Holocaust mastermind Adolf Eichmann, who were granted safe refuge in the Pope’s hometown of Buenos Aires, with the aid of the Catholic Church in Rome and in Argentina. (Ten years later Mengele moved to Brazil, joined by other leading Nazis who escaped with the aid of the Vatican, such as Franz Stangl, the commandant of the Sobibor and Treblinka extermination camps.)

(4) There is also concern in Israel that the Pope called Palestinian Authority Leader Mahmoud Abbas a “man of peace” today at an event where Abbas, in the Pope’s presence, repeated his demand that any Palestinian who murders an Israeli must not be punished at all.

* You can see these and other items that are not in these dispatches if you “like” this page: www.facebook.com/TomGrossMedia. 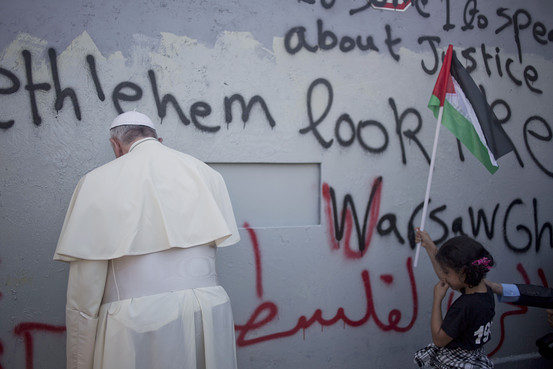