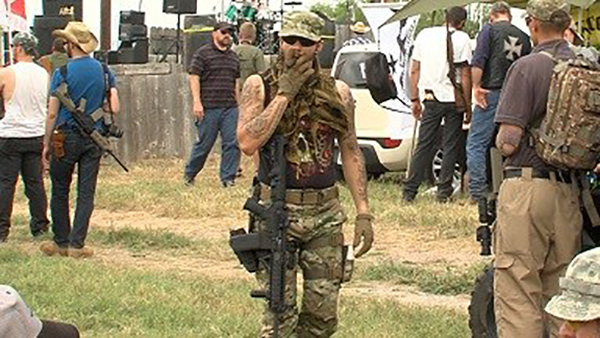 Standing up to the Bureau of Land Management as feds try and claim thousands of acres of ranchland along the border of the Red River, patriots held an open carry rally in Burkburnett, Texas.

People from southern Texas and Arizona joined Texans to support the ranchers whose land is in jeopardy by the BLM. Men, women and children exercised their Second Amendment right to bear arms during the rally, as reported by Newschannel 6.

A candidate for County Commissioner, Lee Harvey, said the rally has put Washington, D.C. on notice.

“Absolutely, this group of individuals is sending a message to Washington that says, ‘hey we’re still out here, and we still have our Constitution, and we’re going to stand by it,'” said Harvey.

Bill Lockwood, another candidate for County Commissioner, said the concept of liberty has been lost.

“Because really we’re living in a time in which people have the concept that freedom comes from the government or that liberty is a grant of government,” said Lockwood. “But that’s not the case at all. Liberty is a grant of God and government is only there as a protection so that you might enjoy what God has already given you.”

Lockwood said our founding fathers considered life, liberty and property as a package; and Lee Harvey says the BLM told him they’re taking Red River property based on precedence.

“We paid taxes on that land,” said Lockwood. “Now they tell us it’s not ours. Well we say we have a deed and we pay taxes. The man told me himself that a Texas deed does not trump the federal government.”