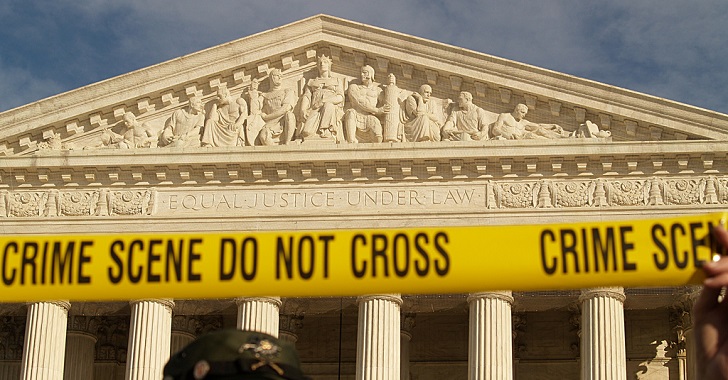 Arkansas police shot and killed a man named Donald Rickard as he attempted to cross a bridge into Memphis. He was shot 15 times and slaughtered by police for attempting to get away from the Justice System.

On Tuesday, the Supreme Court ruled that this was fine; police can now kill people who instigate ‘high speed chases’.

The decision was unanimous, which clearly illustrates how much the Supreme Court values human life.

Supreme Court Justice Samuel A Alito says “We analyze this question from the perspective of a reasonable officer on the scene, rather than with the 20/20 vision of hindsight.” In other words, they are saying they can’t be held responsible for murder and they refuse to see it from any perspective other than the ‘reasonable officers on the scene’, who are known nationwide for killing the innocent.

Living in a time where police and the corrupt government are continuously granted excessive powers by their own fake mechanisms of ‘checks and balances’, this should not come as a surprise.

Using the danger posed to the public as an excuse to grant officers the power to murder, a person could be legally shot and killed in virtually any situation where they attempt to get away from being locked in a cage using a motor vehicle.

Surely we will see more people get shot for absurd reasons as this law settles into the fabric of the police states of America, and that will keep fueling the ideological opposition to such careless, immoral use of deadly force.

The Supreme Court denied this was unconstitutional with zero logic, with Justice Alito saying “It is beyond serious dispute that Rickard’s flight posed a grave public safety risk, and here the police acted reasonably in using deadly force to end that risk,” and that it would have been “a different case,”  if the first shots fired “had clearly incapacitated Rickard” or “if Rickard had clearly given himself up.”

So it’s okay to paralyze him, kill him, pretty much do anything to make sure this man faces the cold death grip of the police state? Never mind what he did in the first place, if he runs from the almighty power, he is to be slain in front of everyone.

Makes a lot of twisted sense.

Please share this with as many people as possible, so they can be aware of how easily they could become victims of the legal murderers of the police state.

Contributed by Cassius Methyl of The Anti Media.