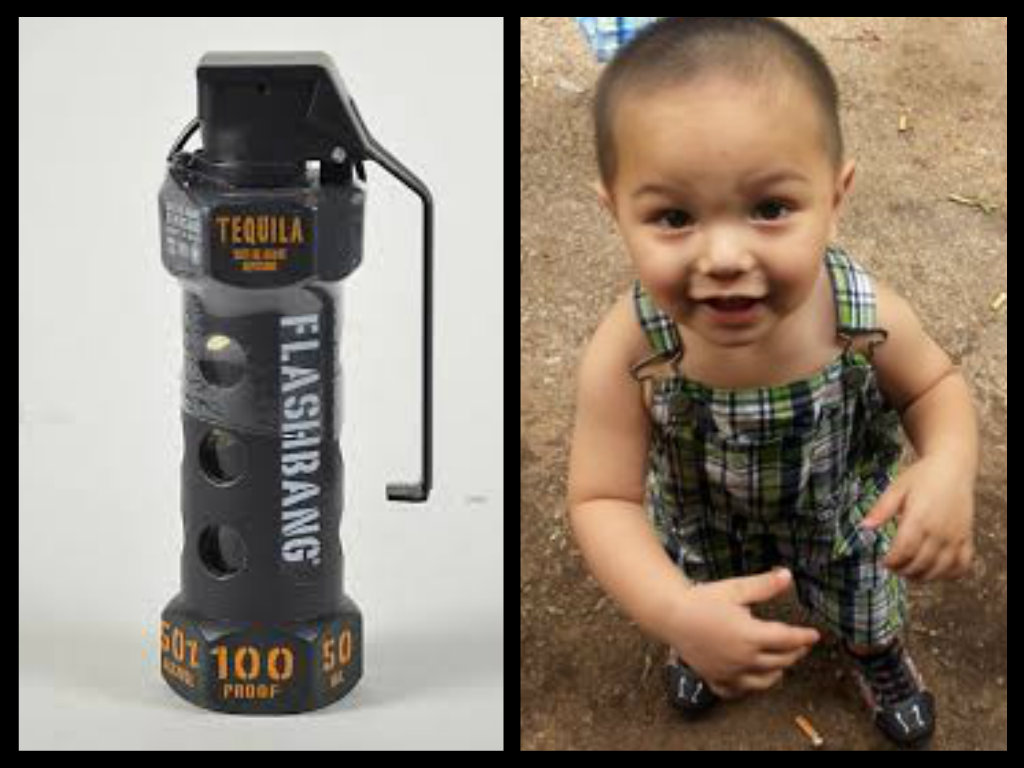 The Atlanta Journal-Constitution and CBS Atlanta are reporting that police officers mistakenly threw a flashbang device into a toddler’s playpen, injuring the child critically. The child, Bounkham “Bou Bou” Phonesavanh, has been given a 50% chance of survival. The child is 19 months old.

How did this happen?

According to AJC police were there to make a felony drug arrest after methamphetamine had been purchased from the house according to a tip from a confidential informant.

“The last thing you want is law enforcement to injure someone innocent,” Habersham County Sheriff Joey Terrell told The Atlanta Journal-Constitution. “There was no malicious act performed. It was a terrible accident that was never supposed to happen.”

Hours after a confidential informant said he bought methamphetamine from Wanis Thometheva at a Habersham County home late Tuesday, officers returned to the home to arrest him.

Thometheva, 30, of Cornelia, wasn’t a stranger to them, police say. Terrell said that during a prior arrest on drug charges, investigators discovered Thometheva had weapons, including an AK-47.

“That’s the threat he uses to those who don’t do what he wants,” Terrell said.

Thometheva was not at the home at the time of the raid but was later arrested at another house on a felony drug charge of distribution of meth.

Officers had no indication that any children were inside the Lakeview Heights home when they returned around 3 a.m. Wednesday, Terrell said, and approached the same door where drugs had been purchased.

That door, which leads into a former garage that has been remodeled into a bedroom, was locked, so officers opened it, the Sheriff said. Then, a distraction device, or flash bang, was tossed inside.

“It distracts them so you can make entrance,” Terrell said.

But this time, the device landed in the playpen where a toddler was sleeping. Little Bounkham “Bou Bou” Phonesavanhs and his family, including parents and three older sisters, were all asleep in the room while visiting from Wisconsin. Only the little boy was injured.

“It’s my baby. He’s my only baby. He didn’t deserve any of this,” said Alecia Phonesavanh, the mother of the child.

“It landed in his playpen and exploded right in his face,” said Phonesavanh.

The child is now being treated at Grady hospital and has a 50 percent chance of survival.

“He’s in the burn unit. We got to see him and his whole face is ripped open. He has a big cut on his chest,” said Phonesavanh. “He’s only 19 months old, he didn’t do anything.”

The sheriff’s department said they had no idea there were children in the house.

“There was no clothes, no toys, nothing to indicate that there was children present in the home. If there had been then we’d have done something different,” said Cornelia police chief Rick Darby.

Being a police officer is a dangerous job but that “danger” comes with the job. People who require a safe existence should not get into police work. How could the police have avoided injuring and possibly killing this child?

Maybe they could have either knocked or rang the doorbell. If they would have they might have realized that the suspect they were looking for was not at home.

If you want to be a cop then I applaud you for an honorable pursuit, but you have to expect to be shot at. Police safety is not increased by surprise entry. There have been multiple incidents of police being shot and killed in no-knock raids this year. Police can’t keep killing innocent citizens (and themselves) over mistakes, accidents and misjudgments that are all the result of unconstitutional no-knock raids.

If you really don’t want to go ring the doorbell or knock then cover the exits and honk the horn or turn on the sirens. This has to stop. Too many innocent people are being hurt or killed. Police officers kill 500 innocent Americans each year. Did you know that?

Mistakes happen but there are some common sense fixes that can be put in place to drastically reduce those numbers.

That is my opinion. What is yours?