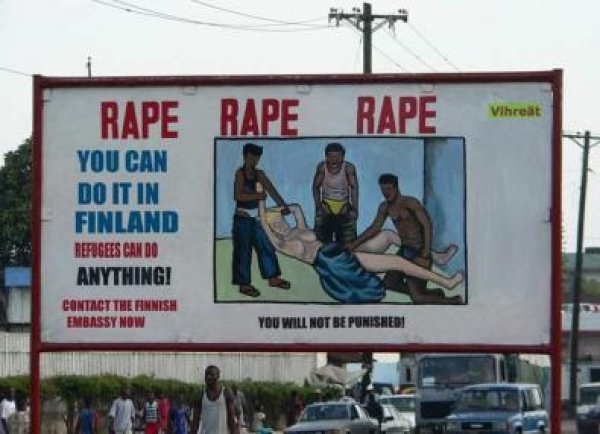 Islam permits Muslim husbands to abandon their wives to rapists in order to save their own lives—so says Dr. Yassir al-Burhami, vice president of Egypt’s Salafi party, the nation’s premiere Islamist party since the Muslim Brotherhood was banned.

Burhami’s fatwa, or Islamic decree, is not altogether surprising. Earlier the Salafi sheikh said that, although a Muslim man may marry non-Muslim women, specifically Christians and Jews, he must hate them—and show them that he hates them—because they are “infidels” (even as he enjoys them sexually).

Indeed, the many fatwas of Dr. Burhami, a pediatrician by training, include banning Muslim cab and bus drivers from transporting Coptic Christian priests to their churches, which he depicted as “more forbidden than taking someone to a liquor bar”;permitting marriage to minor girls;banning Mother’s Day—“even if it saddens your mother”—as a Western innovation; and insisting that Muslims cannot apostatize from Islam—a phenomenon often in the news.

Now in his most recent fatwa—that husbands are permitted to forsake their sexually-assaulted wives in self-interest—Burhami relies on qiyas, or analogy, based on the rulings of a prominent twelfth century jurist: according to Imam ‘Azz bin Abdul Salaam, a Muslim should abandon his possessions to robbers if so doing would safeguard his life.

Based on this logic, Burhami analogizes that the Muslim husband should abandon his wife if defending her jeopardizes his life—as she is just another possession that can easily be replaced.

In the words of a critical Arabic op-ed titled “Manhood according to Burhami!” and written by one Amani Majed, a Muslim woman:

So that which applies to abandoning one’s possessions to thieves and fleeing in fear of one’s life, applies—in Burhami’s view, sorry to say—to one’s wife and daughter.  So if the wife is ever exposed to rape, she is seen as a possession.  The husband is to abandon her to the rapists and escape with his life.  And why not?  For if he loses his possessions, he will replace them; and if his wife is raped, he will marry another, even if she remains alive!

The op-ed goes on to consider the ramifications of Burhami’s logic should every Muslim man follow it: if a policeman patrolling the streets sees a woman—a stranger, not his wife or daughter—being gang-raped, should he intervene, as his job entails, and risk his own person, or should he think only of himself and flee?  Should the Egyptian soldier stand his ground and defend his nation against invaders, or should he flee to preserve his own life?

First: Salafis like Burhami, who try to pattern their lives as literally as possible after Islam’s prophet Muhammad and his original companions—hence the ubiquitous beards and white robes—deserve attention for they are a treasure trove of information on literal Islam.  It’s always the Salafi-minded Muslims who evoke and uphold any number of things deemed absurd or evil in a Western context—from trying to enforce a canonical hadith that compels women to breastfeed adult men (ironically, to protect their “chastity”), to drinking camel urine for good health, to calling for the destruction of all churches.

Of course, even this honesty is contingent on Muslim capability and advantage.  Thus Dr. Burhami himself once said that peace treaties with Israel and other infidels should be respected—that is,until Muslims are capable of reneging and going on a successful offensive.

Still, Salafis are much more frank and honest than other, less overt Islamists, namely the two-faced Muslim Brotherhood, which, now that it has been overthrown in Egypt, has shown its true face—terrorism—causing it once again to be banned in Egypt.

Second: To be sure, many Muslims—perhaps the majority—reject Burhami’s latest “cowardly husband” fatwa, in agreement with the aforementioned op-ed.  The problem, however, and as usual, is that while they agree that such behavior is unbecoming of a husband, in the realm of Islamic jurisprudence, it is difficult to argue with the Salafi cleric’s logic.  He used qiyas, a legitimate tool of jurisprudence; and the imam whose logic he analogized is widely recognized as an authority in Sunni Islam.

Moreover and despite the sneering tone of the op-ed, women are, in fact, often depicted as little more than chattel for men in Islamic scriptures.

This is the fundamental problem facing all moderate Muslims: despite what they like to believe and due to a variety of historical and epistemological factors, they are heavily influenced by Western thinking—protecting women and the weak in general, or chivalry, is a Christian “innovation”—so whenever they come up against Islamic teachings they cannot fathom, they collectively behave as if such teachings don’t really mean what they mean.

Yet the Salafis know exactly what they mean.

Third: This latest fatwa exemplifies the lure of Salafism.  This brand of literal Islam does not offer anything profound or spiritually satisfying, but it does offer divine sanctioning for unabashed egoism—in this case, forsaking one’s wife to rape in self-interest.

Justifying egoism is not limited to preserving the self but also gratifying it—especially in the context of jihad.  One can go on and on about the other Salafi fatwas permitting rape, incest, and prostitution for those fighting to empower Islam.  Even renowned heroes like Khalid bin al-Walid—the “Sword of Allah”—celebrated in the Muslim world for his jihadi conquests, was, from a less hagiographic perspective, little more than a mass murdering, sadistic rapist.

Why do they believe this?  Because from a Salafi point of view, all free non-Muslim “infidels” who do not submit to Islamic law, or Sharia—Americans and Europeans for example—are natural born enemies, or harbis, and thus free game.