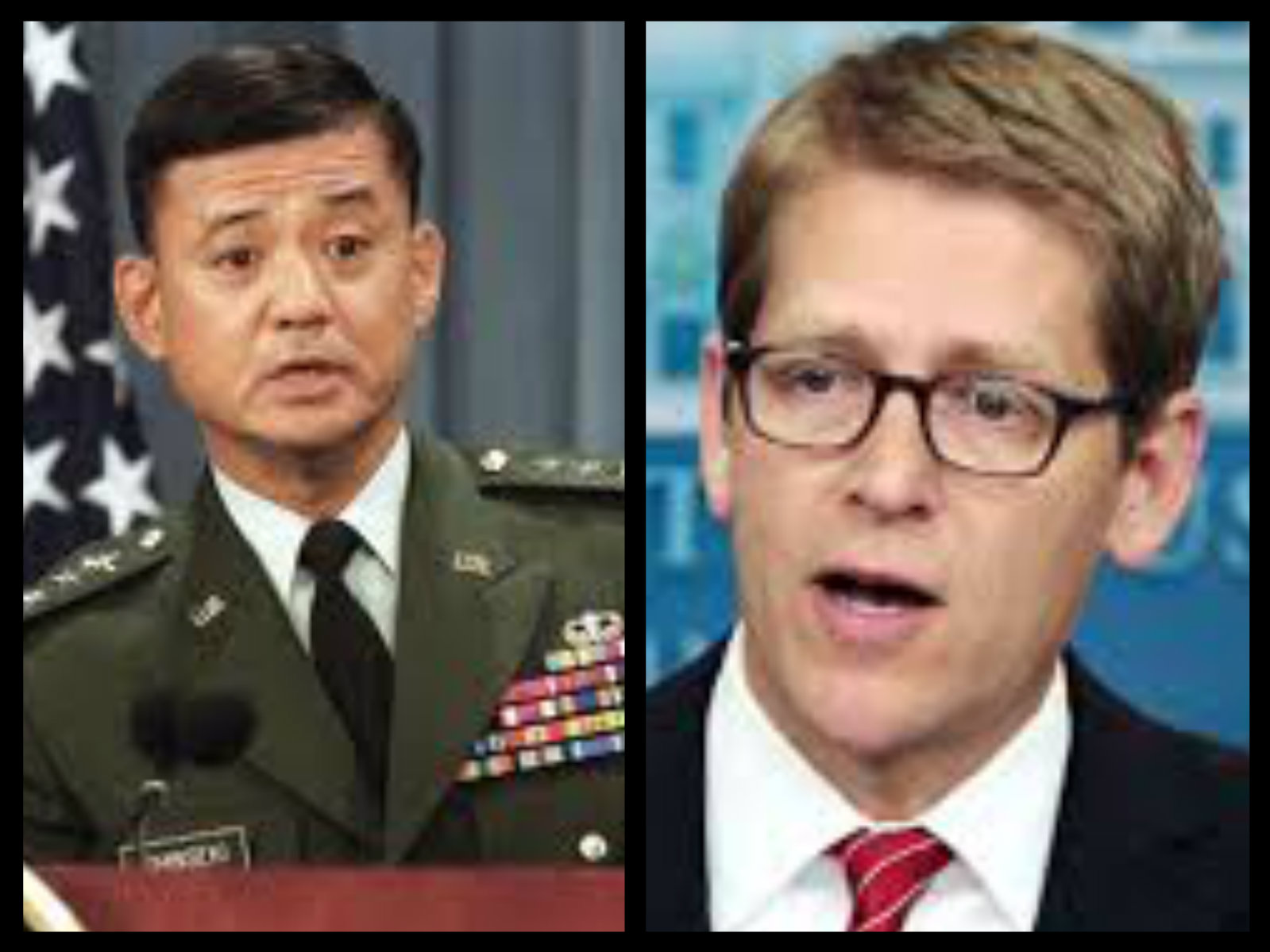 Yesterday America got a ‘two-fer’ as both Obama mouth piece Jay Carney and VA Secretary Eric Shinseki both resigned.

First Shinseki…now folks please let’s NOT get all excited by Eric Shenseki’s resignation for all this resignation means is that Barack HUSSEIN Obama found his fall guy…while our veterans will still be the ones hurting…and hurting for some time to come.

Prompted by outrage from both Republicans and Democrats calling for Shinseki to resign, Obama announced that VA Deputy Secretary Sloan Gibson…who has been on the job just three short months…would serve as interim head of the department while he chooses a permanent replacement. But you just know the fix is in as Gibson being Shinseki’s right-hand man…NO matter the short length of time…knew just as much about what was going on with the VA as Shinseki did, especially with all having come to light over these past few months.

And because he was NOT fired…as he should have been if Obama had any true concern or feeling for America’s veterans…Shinseki gets to keep his government pension and his military pension both which reach into six-figures yearly…so don’t shed any tears for him…for it’s our veterans who get screwed yet again as this most shameful of injustices against them cannot and will NOT be fixed overnight.

And Obama’s saying yesterday that it was “with considerable regret” that he had accepted Shinseki’s resignation…a resignation that followed whistle-blower allegations that have been proven true that there’s massive mismanagement and manipulation of data related to veterans wait times at VA hospitals and clinics that resulted in over 100 veterans dying…Shinseki’s resigning really amounts to NOTHING for being that this concerns injustices done to both our vets and our returning troops and with Obama being their Commander-in-Chief…the blame and the taking of responsibility needs to be placed at the feet of its rightful owner…that being Barack HUSSEIN Obama.

But with Shinseki…a 4-star general and war hero twice wounded and three times awarded a Bronze Star for valor in Vietnam… resigning as the scandal grows with each passing day…attention is now diverted away from Obama’s role in this injustice. And with Shinseki willing to be the fall guy, all while saying that he was shocked by widespread evidence of a loss in integrity within the VA system, you just know he is somehow being rewarded with more than just being able to keep his cushy pensions. And asked why he decided to accept Shinseki’s resignation and accept it now as the scandal heats up, Obama said he regretted accepting said resignation, but he knows “the VA needs new leadership”and that he agreed with Shinseki’s own assessment that he has become too much of a distraction.

“We don’t have time for distractions…We need to fix the problem,” Obama said.

And even with Shinseki issuing an apology for the scandal and with his last official act being the firing of administrators at the Phoenix VA hospital…ground zero from which this scandal originated…where 1,700 veterans were removed from any official list and kept waiting for appointments some for up to six months or longer…the only way to truly fix the problems at the VA is to have the one causing all the problems…the one who knew about all the problems but who chose to look away…resign and take responsibility…and that means Barack HUSSEIN Obama… but we know that sadly that will NEVER happen…and our precious and hurting veterans lose again.

Also yesterday, coming a scant three hours after he confirmed the resignation of Eric Shinseki, Obama announced that also resigning was Press Secretary Jay Carney…another resignation way overdue. Now being replaced by White House special assistant to the president and principal Deputy Press Secretary Josh Earnest…a longtime fixture in Obama’s circle“going all the way back to the Iowa caucuses” in 2008…as in replacing one bloviating mouthpiece with another bloviating mouthpiece…Carney stood by Obama’s side while he called him one of his closest advisers and friends at the White House. Carney then told reporters that “It’s been an amazing experience…just so fulfilling” to have worked with this administration.

I guess knowingly lying through one’s teeth and helping to talk Obama out of involvement in one scandal after another…and know that Carney’s been one of the most effective liars this administration has had as witnessed by his helping Obama cover-up the murders of four brave Americans at Benghazi…Carney’s saying his experience with Obama is “just so fulfilling,” shows what a sick and vile bast*rd he really is.

Carney, whose LIES started with the questionable circumstances surrounding the death of Osama bin-Laden and the subsequent cover-up of Extortion 17, then leading into all things Benghazi, going into the fraud ridden 2012 elections and the IRS and NSA scandals that followed, then leading into the shutdown of the federal government, and into the disastrous roll out of HealthCare.gov, finally culminating with the current VA scandal…also said it had been honor to be this president’s press secretary.

“I’m not saying it’s easy every day but I love it,” Carney said. “It’s an important interaction that takes place here…To be a part of it is an honor and a joy for me.”

So while it might be ‘an honor and a joy for him’ it sure the hell isn’t for ‘We the People’ as Carney’s adding that “it’s not my last briefing” and by his NOT laying out a transition schedule for Josh Earnest to take over…to take over the ‘Obama Ministry of Propaganda’…means we’re stuck hearing his LIES a bit longer as Carney’s official departure does NOT take effect until mid-June.

So while Obama cleans house we’re left wondering just how fast that house will get dirty again.