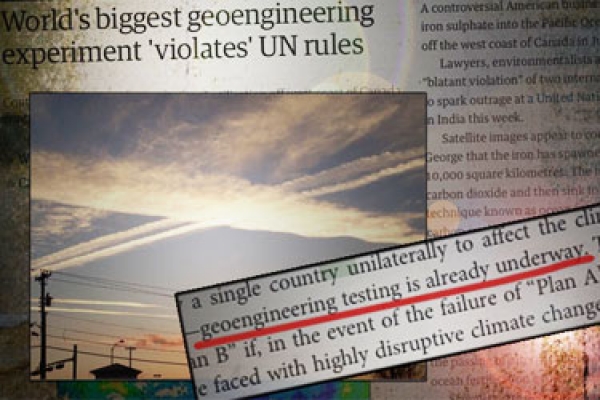 People continue to deny that chemtrails are being or will be sprayed into the atmosphere under the guise of fighting climate change, despite the fact that there are both tacit and overt admissions that governments are messing with the environment everywhere, including a recent NASA Jet Propulsion Laboratory video where a scientist talks specifically about using a plane to spray aerosols into the stratosphere for this very reason (and what would happen if a rogue scientist were to hijack the planet with this technology — a possibility NASA is apparently very concerned about).

Now through a freedom of information request, former British Columbia premier Bill Vander Zalm has revealed that Environment Canada is researching the use of aerosols to fight climate change.

The document notes that geo-engineering methods are classified into two groups: solar radiation management, and carbon dioxide removal from the atmosphere.

It also indicates that government scientists are involved in the internationally-coordinated Geo-Engineering Model Intercomparison Project or GeoMIP. The modeling program seeks to improve understanding of the “efficacy and unintended consequences” of solar radiation management.

The briefing paper was prepared in advance of a top-level inter-agency meeting convened by Environment Canada to discuss matters about geo-engineering options to address climate change.

A Natural Resources Canada memorandum notes that among those scheduled to attend were Prime Minister Stephen Harper’s national security advisor Stephen Rigby, and Richard Fadden, who was at that time director of the Canadian Security Intelligence Service.

A slide presentation by Environment Canada reveals that the department has undertaken “two types of experiments”. One simulates the reduction of incoming solar radiation, and another in which “aerosols are injected into the stratosphere”. (source)

Apparently out a total of 47 pages Vander Zalm received, ten of the pages had redacted sections and six were blank.

Quite obviously, governments don’t spend time and money simulating scenarios for things that they don’t intend to ever actually deal with. You don’t see top government security officials attending high-level briefings for mutated shark monster Armageddons or robot uprisings, for example (though the latter may come to pass, give it time).

Of course an Environment Canada spokesperson was quick to claim that his department only conducts computer simulations…as part of GeoMIP.

GeoMIP is only one program, so there is no telling what other field and laboratory climate change research the Canadian government is actually undertaking in addition to that.

But Canadian government climate change field and laboratory experimentation is definitely going on, however, considering what Environment Canada’s “About Us” page says under the heading “Climate Change Research”:

Our climate change research focuses on climate change and variability in Canada, the causes and the impacts. Our approach includes: field and laboratory research aimed at understanding climate processes; monitoring atmospheric greenhouse gases to track and understand changes; and developing and applying of climate models to make projections of future change. Our scientific results provide the basis for adaptation and mitigation actions, for climate policy and development, and for climate-related services and products for Canadians.

They aren’t doing it all for nothing. Notice the phrase: “Our scientific results provide the basis for adaptation and mitigation actions”…

Mitigation actions such as injecting aerosols into the stratosphere, perhaps?

Chemtrails? Noooo…of course not…that’s all a conspiracy theory with no basis in fact whatsoever, right? Just a lot of scientists and top-level security officials involved in multi-million-dollar pointless government research for absolutely no reason at all…