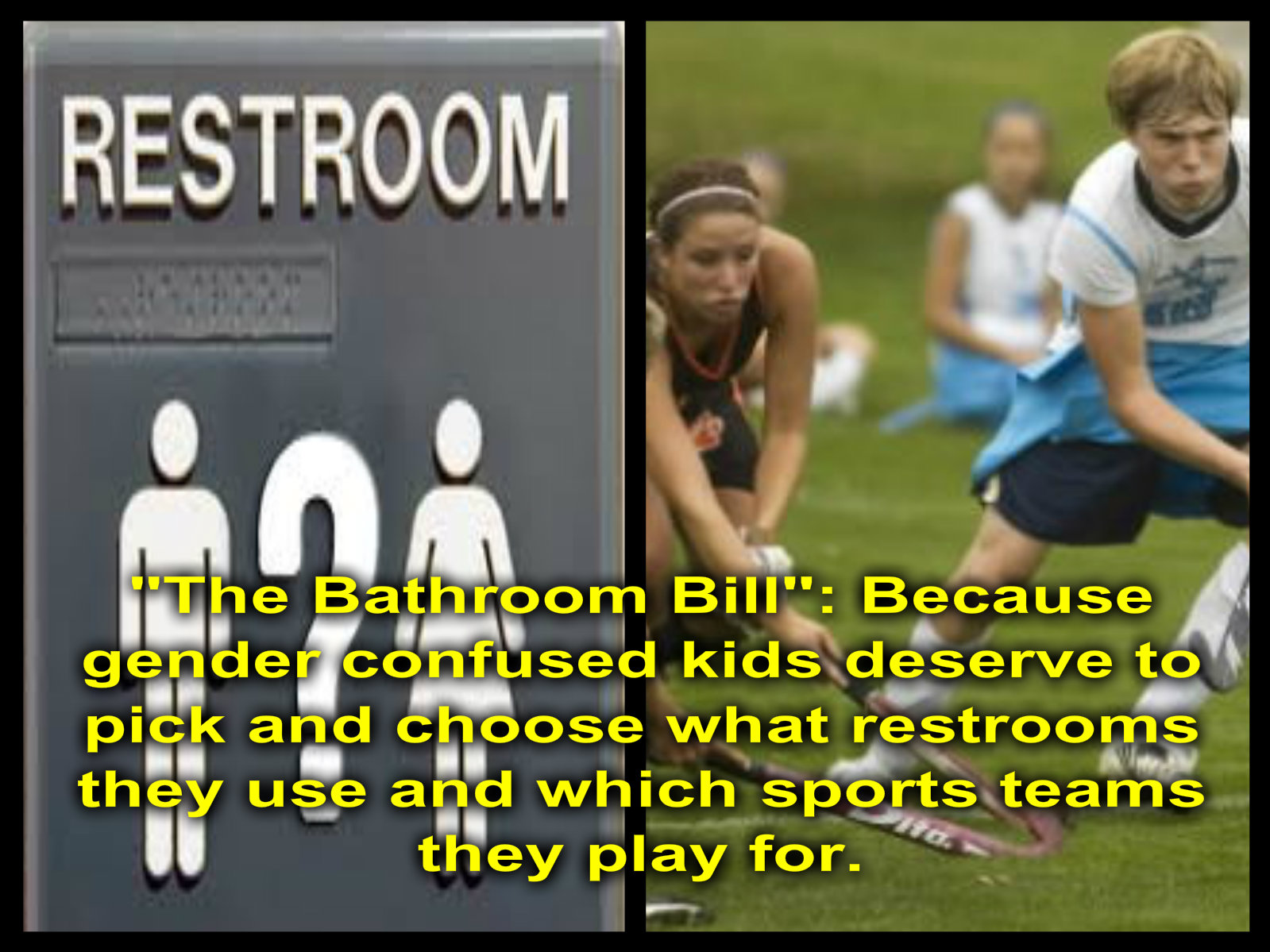 Recently several states have adopted what is euphemistically called “The Bathroom Bill.” The bill was first adopted in California and mandates schools to allow boys and girls to use each other’s restrooms if they identify with the opposite gender. In other words, children can use which bathroom is consistent with which gender they feel they are at any given time! Apparently, the rule does not require permanent identification as male or female, but permits the individual to change his/her mind at whim. Nor is this new law limited to bathroom choice. In California the law specifically states, “A pupil shall be permitted to participate in sex-segregated school programs, activities, and facilities, including athletic teams and competitions, consistent with his or her gender identity, irrespective of the gender listed on the pupil’s records.”

Therefore, girls who identify as boys will be allowed to play on boys’ football teams, and boys who identify as girls will be allowed to play on girl’s swim teams and participate in other activities usually reserved for girls. Athletic directors and coaches will now be mandated to let boys change in girls’ locker rooms with the girls and to let girls change in boys’ locker rooms.

While much is written about the confusion of sexual orientation, there is an even greater issue to discuss here, especially with the young, namely that the Bathroom Bill actually encourages—indeed creates—what is called gender confusion, doubt about what sex a child is. In effect, the LGBT and other similar lobbies, who push their agenda by way of such outrages as the Bathroom Bill, are causing children to question whether they are boys or girls, as though this were a matter for debate. The Bathroom Bill legalizes the endangerment of children’s sanity.

We are not speaking here of sexual orientation, which refers to whether one is attracted to the opposite sex or to one’s own. Homosexuality, like heterosexuality, is not gender confusion. Men who are attracted to men are men. Women who are attracted to women are women, regardless of which role they play in their personal relationships. Nor are we speaking of actual transgendered people, who have taken steps to change physically. We are speaking of children, boys and girls, being encouraged to ignore their actual physical sex and to casually decide to be the opposite sex from one day to the next. Apparently, their feelings are to be considered more important than reality, if indeed such feelings are even legitimate. The reality of one’s sex at birth has been and always will be undeniable, regardless of whim or suggestion.

Extrapolating the logic of the argument on which this malicious bill is based, what would keep someone from deciding one day that he or she is a dog or a piece of pie or a car? And if this thinking is taken as normal, imagine what one could get away with! Complaints that one person sexually assaulted another could be covered by the argument that the assaulter felt like a farm animal that day and thought the victim was a grapefruit.

I personally intend to feel like a brain surgeon one day and a Hollywood mogul the next. Will they pay me to make movies, do you suppose, or let me operate on someone’s cranium? This is insanity encouraging insanity!

The point I am making is not funny. It is horrible. In fact, it is child abuse and it is very clearly a crime. Politicians, such as Martin O’Malley, present governor of Maryland, who signed the bill into law in his state, know perfectly well that the Bathroom Bill is criminal and will destroy the sanity of children! But they ignore this fact, because they are intent on causing as much chaos as possible in society. Then, they can seize the excuse to ride heroically in to fix the situation they themselves created and under the guise of restoring sanity and order, take permanent control and power of government!

Parents and teachers together should rise up and shout down this law and all its advocates. It is time to throw off the tyranny of crazy minorities and those who would use them to nefarious ends. Together, we must once again seize control of our schools, the curriculum taught to our children and the rules by which their lives are guided. A return to sanity is vital and it must take place now!