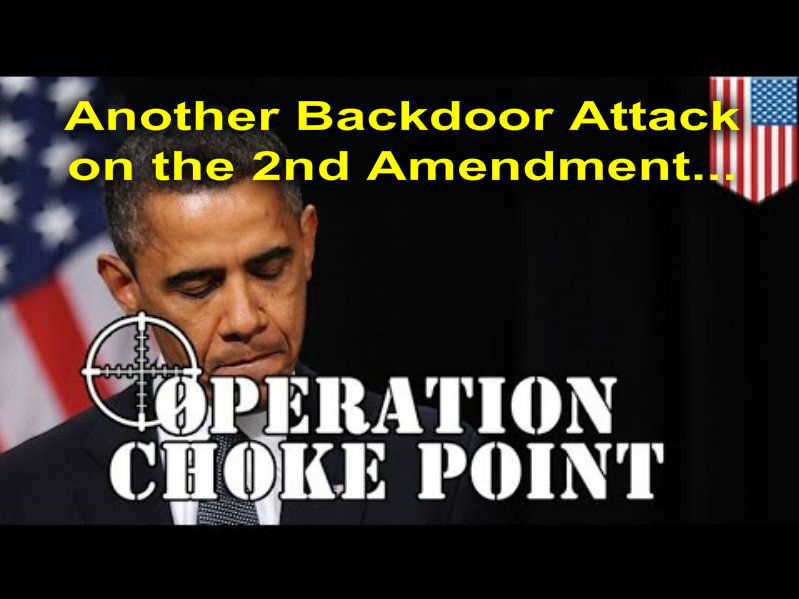 By now we have all heard about Operation Choke Point. It is the latest program initiated by the lawless, criminal Department of “In”Justice where pressure is exerted on banking institutions to cease providing services to business considered “high risk.” It has been reported these “high risk” businesses include gun and ammo dealers, coin dealers and payday lenders – all legal, legitimate businesses operating within the law. Earlier in the year, it was reported that banks were denying services to adult film stars because of their industry.

Missouri Republican Congressman Blaine Luetkemeyer proposes to give the DOJ a dose of its own medicine by “choking” off the funding for this program. Luetkemeyer attached an amendment to the Commerce, Justice and Science appropriations bill that recently passed the House to stop the DOJ from using intimidation tactics to force banks to cease services to legitimate businesses.

Speaking about Operation Choke Point, Luetkemeyer stated, “What it does is go after an entire industry, whether it’s obeying the law or not. And that’s just wrong.”

The amendment followed a report released by the House Committee on Government Oversight and Reform that claimed “Operation Choke Point has forced banks to terminate relationships with a wide variety of entirely lawful and legitimate merchants.”

This happens because the anti-fraud initiative, which is operated by the Department of Justice which works in conjunction with the Federal Deposit Insurance Corporation, forces banks to more closely monitor their business relationships with companies in industries deemed “high risk.”

Luetkemeyer says this has a chilling effect in forcing banks to be over cautious.

Businesses that have been wrongly ensnared by the DOJ’s aggressive program include gun sellers, ammunition sellers, coin dealers, tobacco sellers, career repair service providers and many other legitimate businesses.

Last week, The Washington Times reported that the owner of Powderhorn Outfitters, a Hyannis, Massachusetts gun seller, claimed a line of credit would not be extended to him by his longtime banker, TD Bank, because he sold guns.

According to Luetkemeyer, the DOJ is using what amounts to intimidation tactics on banking institutions to force them into ceasing business relationships to long term customers in many cases, which Leutkemeyer states is wrong.

The amendment is simple, reading “none of the funds made available in the CJS appropriations bill may be used to carry out Operation Choke Point.”

Leutkemeyer contends this is just a first attempt in curbing the problem he terms “the nonsense of government overreach.” In speaking with the Daily Caller, Leutkemeyer said he has spoken with the DOJ about “providing a safe harbor for banks to continue doing business with legal and legitimate companies, but the agency has not listened.” As a result of the department’s deaf ear, Luetkemeyer stands firm in stating this program has to be stopped.

“‘This is picking and choosing winners and losers,” Luetkemeyer told the Daily Caller.'”

Everyone in America should know by now this program has nothing to do with targeting illegal, illegitimate “high risk” businesses. This entire program is the back door unilateral agenda of Obama in order to enact gun control. If gun and ammunition sellers do not have a financial institution with which to do business, these legal, legitimate businesses will go out of business, meaning that no citizen who is endowed with the God-given right to bear arms will be able to purchase arms and ammunition. Without ammunition, a firearm is useless.

This is the latest and greatest abuse of power exhibited by the DOJ headed by Eric Holder. While there has been no law passed, officially, by Congress curtailing Second Amendment rights, this is an end run around Congress to disarm the citizenry and part of the playbook used by Obama and his ilk toward a totalitarian, tyrannical dictatorship. Fortunately, some in Congress are paying attention; but, it may be too little, too late. The question is will this “amendment” even cause a skip in the step of the DOJ in their efforts. Based on the past behavior of how this administration views laws and amendments, one can assume Holder and the DOJ will spend their appropriations how they see fit with the robust approval of Obama himself.

Commenting on this abuse of power by the DOJ, committee Chairman Darrell Issa said, “If the administration believes some businesses should be out of business, they should prosecute them before a judge and jury. By forcibly conscripting banks to do their bidding, the Justice Department has avoided any review and any check on their power.”

Issa’s comments are noble. However, Americans know how Obama, his Department heads and their agencies feel about the law – it’s a nuisance and hindrance to their agenda, unworthy of following except when it suits them in their favor. It is blatant inequity of the law which has somehow almost become accepted as standard operating procedure. At least, anyone seriously looking would believe so.

While Congressmen are raising objections now, where were those objections when the first blatant violations of the Constitution and the law under this administration started? Where was Congress when previous administration’s violated the Constitution and the law? As the old saying goes, “give someone an inch and they’ll take a mile.” Precedents have been set and continue to be set.

Congress has ceased being a check on the presidential power to the point it is useless; rendered to nothing more than a bunch of talking heads spouting the sideshow advertisements during hearings that are dog and pony shows. Government officials refuse to cooperate with any oversight committee or provide requested documents resulting in these officials being held in contempt of Congress with impunity. Some, like Lois Lerner, are allowed to retire with benefits, I’m sure.

Welcome to the UDA – the United Dictatorship of America? How do you like your tyranny?