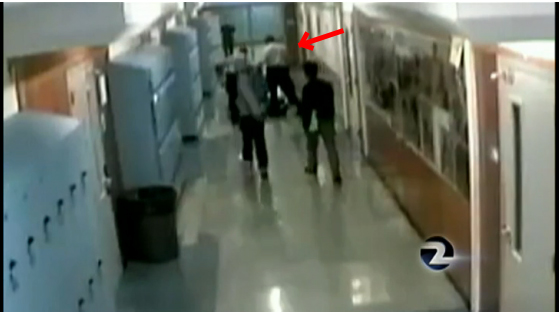 Francisco Martinez is a wheelchair-bound student with Cerebral Palsy. He attends Oakland High School in Oakland, CA. On May 19th he had an incident that called for an escort from school security. It is unclear what the incident was because some sources say he was late for class but other reports say he was handcuffed.

Francisco was obstinent. Rather than being fully cooperative he chose to spit on security guard Marcell Mitchell. What transpired beyond that point is literally unbelievable.

Mitchell was arrested on child abuse charges and no longer has a job at Oakland High School.

Amazingly, as reported by ABC 7, there are students who are defending Marcell Mitchell:

Some students at Oakland High School are coming to Mitchell’s defense by displaying signs that read “spitting is a crime” and “you provoked this.” The students also circulated a petition of support for the fired security guard. “We are pro-Mitch because the incident was not right. It was very disrespectful for the student to do that to him,” student Shaloei’o Luna said.

What are we teaching our children?

Francisco Martinez may very well be a punk who thinks that the world owes him something. He admitted to spitting on Mitchell and a prior altercation that compelled Mitchell to handcuff Martinez is not being reported by many sources.

This was not the case of a school security guard going nuts on a wheelchair-bound student for no reason. I am sure there was verbal provocation as well as the spitting.

However, it was Mitchell’s job to remain calm. He failed to do that. He should lose his job and be charged. In my opinion the school did the right thing.

There is no doubt that being an authority figure is tough. That can be said for security guards and traditional street cops alike. But part of the job is to be able to keep your emotions in check and react accordingly. Too many in the current “police state” are proving that they can not control their emotions and it is resulting in the use of excessive force that in some cases can lead to wrongful death.

But when students can defend an action that was obviously wrong that says a lot about our society as well. Our children are being indoctrinated in public schools. They are being taught that police state actions are normal. I feel that the reaction of fellow students is the real story here.

Is this teens being teens or is it a result of the calculated and persistent “dumbing down of America?”

Maybe a bit of both.