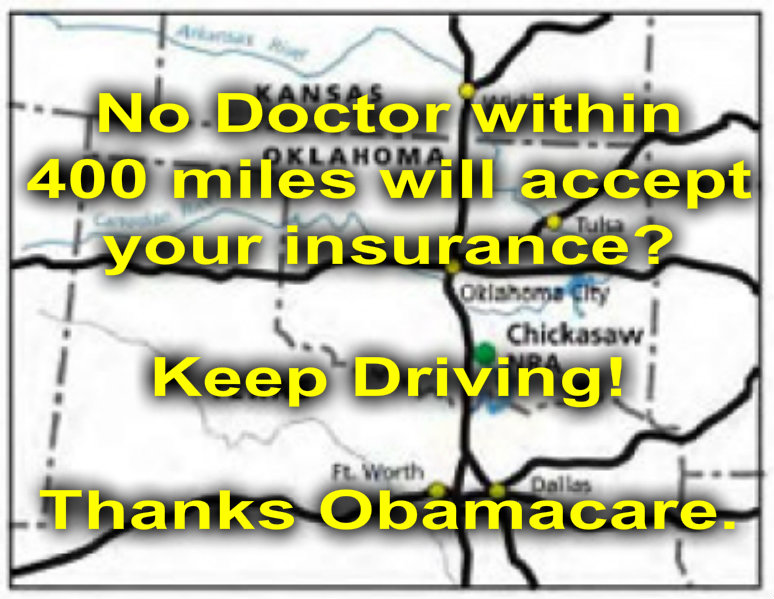 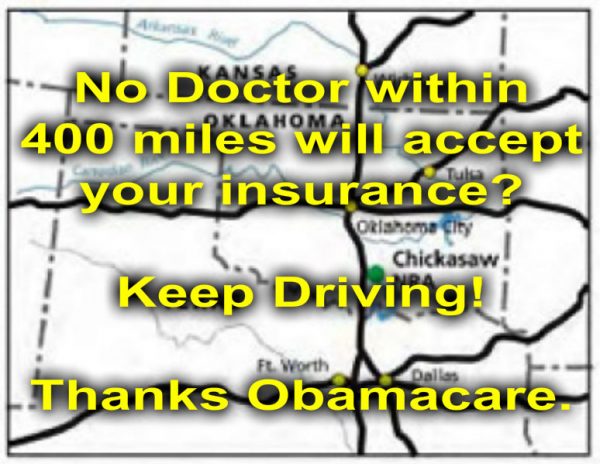 The warm fuzzy stories surrounding the implementation of Obamacare as the answer to providing every American with affordable health care insurance would not even complete a typewritten page. However, the problems with the government take-over of the health care insurance business could fill volumes. In the latest Obamacare saga, a cancer survivor in Oklahoma who signed up under the state’s federal exchange has discovered there is not one single doctor within a 400 mile radius that will accept her plan.

Janet Grigg, a colon cancer survivor, told KTEN-TX, that when she attempted to use her Blue Cross Blue Care insurance plan she recently purchased at her regular cancer screening, she was turned down. Grigg paid for the visit out of her pocket and now faces paying for future visits in the same manner. Grigg stated when she arrived at the office she was informed by the staff her insurance card would not be accepted, stating personnel “received a memo.”

“I would not find a doctor within a 400 mile radius from Dallas up to Oklahoma City that would, in fact, take the plan that I had chosen, that I thought would be accepted in my county, because I did select my county as my residence,” Grigg said.

Grigg said that she called the Obamacare exchange in her state and the representative told her they receive calls like this “every day.”

The statement, issued by the company, said, “because of the dramatic changes occurring within the health care industry, decisions for our existing customers that were once straight forward are not anymore due to many new options available to them.”

What has happened to Janet Grigg is a product of the Obamacare changes to the health care industry. The health care law requires participating insurance companies to cover a wide range of services; some services that many individuals do not need and would not ever use. In order to keep the costs of the plans down, the insurance companies are resorting to narrowing their provider network in a last ditch effort to limit their costs. Individuals, like Janet Grigg, have lost access to their doctors because of the narrowing of provider networks.

So much for the promise, “If you like your doctor, you can keep your doctor. Period.” It seems when Obama was repeatedly making that statement, there were a few details missing – if the plan you choose includes your doctor in the network; if your doctor accepts the plan; and, if not, you will be inconvenienced in order to receive care. Wasn’t this Democratic shoved in our face health care legislation sporting the name of the current liar-in-chief supposed to provide health care for every American? That was the rhetoric; but, as has been said time and again, having health care insurance does not guarantee access to health care nor does it guarantee payment for services.

Janet Grigg has a health care insurance plan obtained through a federally-run state exchange meeting all the law requirements. After purchasing her plan, the insurance company narrowed the provider network to keep premium costs down because of the continually changing “rules.” It seems the provider of services received a memo informing them of the change, but somehow, Janet Grigg, the consumer, was not informed. To add insult to injury, the best the representative can offer Ms. Grigg is “we receive calls like this every day.”

Ms. Grigg now has health care insurance where she will have to drive over 400 miles to see a doctor; but, she avoids the tax for not having health care insurance. How many individuals can, would or could drive 400 miles to see a physician? If you think about it, that is a 6 to 8 hour drive taking into account unexpected variables to include weather, traffic, road conditions, etc. You can forget a same day appointment if you are really sick or the physician needs to see you that same day. Individuals who do not have private transportation would have to rely on taking a bus, train or plane to travel 400 miles to see a physician.

How many other individuals will find themselves in Janet Grigg’s shoes? They will have their government approved Obamacare plan only to find out that access to care will be inconvenient or almost impossible for some due to distance and cost involved to travel. These consumers will be paying for health care insurance that they will be unable to use in their area. Janet Grigg was fortunate to be able to pay privately for her visit; however, that should not have been the case.

Other states such as Washington are experiencing the same issue in regard to insurers narrowing networks to contain costs. Washington State has solved that problem. Regulations were issued in Washington preventing the ability of insurers to narrow networks despite a warning this regulation would increase the premium costs even further. So, the state government of Washington doesn’t mind increasing premiums, which may already be unaffordable for many, to prevent network narrowing by insurers.

It shouldn’t need to be said but again, it must be said. This is what happens when government takes control of an industry, but especially an industry that amounts to one sixth of the US economy. Obamacare is unconstitutional, period; it should never have been passed. However, this disastrous legislation did get passed, signed into law, and the states, in lock step with the federal government, have refused to engage in nullification. Face it folks, we are stuck with this monstrosity.

Obamacare was poorly conceived and implemented. Rules and regulations abound on what type of services the insurance plans are required to cover, the amount of “tax penalty” to be paid for those who refuse to enroll, the operating of exchanges, Medicaid expansion, and the like; however, there was not one thought given that would account for the variables that could occur. This legislation was designed to be a one-size-fits-all health care insurance ponzi scheme. Anyone who has any experience with health care, consumer or provider, knows this industry is not like a moo-moo, where one size fits everyone. Health Care and health care insurance is very individual requiring many varied plans with varied services to meet the needs of consumers and the geographical location the plan provides coverage.

Again, it should not have to be restated that Obamacare was not about providing health care to the uninsured or the under-insured. If there is any question about what Obamacare was designed to do, then Americans have not been paying attention.

And, if there is any question about government run health care, take a look at what is happening to our veterans who rely on the Veteran’s Administration for health care or investigate the health care the government provides to Native Americans under the Indian Health Services. If after all of this, Americans fail to see the problem and those in state governments continue to turn a blind eye, there is no hope for Americans to regain control of their health care.