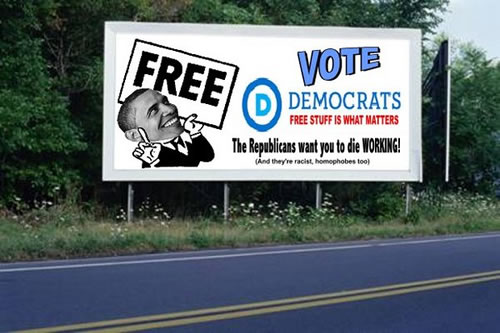 The Liberal Democrats and their toadies in the mainstream press always portray greed as the motivator of the rich, those who make a profit from their initiative. Greed they insist is the motivator of capitalism. Their evidence is Income Inequality between Rich and Poor, as though these two classes were large mobs on the street about to fight it out. The only way to “equalize” income is to take it from the greedy rich group and give it to the deserving poor group.

Let’s clarify something. There are no organized masses of rich and poor, no big country club where the Rich meet to conspire against the Poor, and no one big slum where the Poor all gather to defend themselves. The Rich and the Poor are actually many individuals living all over the place, some in better houses in better neighborhoods, but individuals, distinct from one another as all individuals are. That some people have more than others is not a matter not of class, but of effort and circumstance.

Most of the so-called Rich are people who work hard to attain wealth. They educate themselves, invest, earn, save and spend wisely. These are not class characteristics, but factors that distinguish successful from unsuccessful people, and they are available to everyone who pursues them. Getting an education is not always easy. It requires positive attitudes and effort. A person who resents having to work will not try, but will be consumed by his resentment and envy of those who work. It is a fact of nature that some people have greater natural gifts than others. Everyone knows this. And because people vary widely from one another, some people will have to work harder, smarter or more diligently than others.

There is nothing government can do about this inequity. It is a natural circumstance. But there are many ways a person can improve his circumstances. The first thing is getting a basic education, learning to read, write clearly and calculate numbers accurately. Every student who attends a free public school can acquire these by paying attention in class and doing his homework. These simple skills can lift a person out of poverty and into a job from which he can advance by applying the diligent effort.

There are actually very few people in grinding poverty in the US today, and those that are grindingly poor usually have special circumstances, such as advanced age, chronic illness, disability, or handicap. Most people in poverty are moderately so and could work. But the Liberal policy of extensive welfare does nothing to pull these people out of poverty. In some cases it actually perpetuates it by creating a welfare entitlement mentality. And like all big government programs it is ridiculously inefficient.

To administer welfare on a national level requires an enormous bureaucratic apparatus. Thus a huge percentage of wealth seized for redistribution is siphoned off to pay for its administration and never gets to the proposed recipients. According to a 2012 study by the Cato Institute, author Michael Tanner states,

Despite nearly $15 trillion in total welfare spending since Lyndon Johnson declared war on poverty in 1964, the poverty rate is perilously close to where we began more than 40 years ago. Clearly we are doing something wrong. Throwing money at the problem has neither reduced poverty nor made the poor self-sufficient. It is time to reevaluate our approach to fighting poverty. We should focus less on making poverty more comfortable and more on creating the prosperity that will get people out of poverty.

The argument of Income Inequality is not designed to help the poor. It is designed specifically to create class envy, poor against rich. Anyone who buys the notion that he is poor because someone else is rich is infected with this envy and the only relief he feels he can get is to take the wealth of those he envies. The self-appointed Robin Hoods who promise to accomplish this then get the votes of the envious. This is welfare’s real purpose. Federal Welfare is a scam. It’s as simple as that.

But the results are devastating. Redistribution, which is the backbone of welfare, destroys the initiative of both productive and unproductive people, the productive because they are punished for producing, and the unproductive who do not need to work. The danger is that eventually nobody produces and everyone becomes poor—except the politicians who created the mess in the first place. They will always find a way to seize something from someone.

In Class Warfare, does greed fight greed? Or does greed beget greed? Whose greed will prevail? Actually, the entire argument is built of false premises. First, greed is not the motivator of productive people. Survival is the basic motivator of all human beings, and in a civilized society, survival comes about through productive effort. Warfare, without exception, is nothing more than the seizure of wealth, and it is always unproductive, whether done with spears, lances or guns on a battlefield, or through legislation by government. Government produces no wealth. It only seizes wealth from its citizens, not just from the rich, but from all those who produce wealth on any level. Thus working people are also subject to this form of seizure and, in fact, are responsible for paying into welfare just as those who run big corporations.

Welfare, as practiced today by the Federal Government, is the most socially destructive of all practices, because it promotes not only greed, but a lack of incentive. Among some people welfare is generational, with grandmothers, grandfathers, fathers, mothers, children and grandchildren all being supported on various degrees of welfare passed down from parent to child to grandchild. There is both anecdotal and statistical evidence that generational welfare destroys marriage and family, promotes vast illegitimacy, degrades educational and cultural standards and devastates huge numbers of citizens who would be otherwise motivated to live far more productive lives working toward the goal of acquiring wealth to lead them to a better standard of living. Drive through any poor neighborhood where welfare is extensive and see whether it promotes better lives for anyone?

If we do not rid our political landscape of those who would promote class warfare through the doctrine of income inequality and generational welfare, which is actually degenerative, we will continue to allow the erosion of the most powerful human factor for a free society, the work ethic. We must rid ourselves not of the greed for profit, but the greed of welfare profligacy.