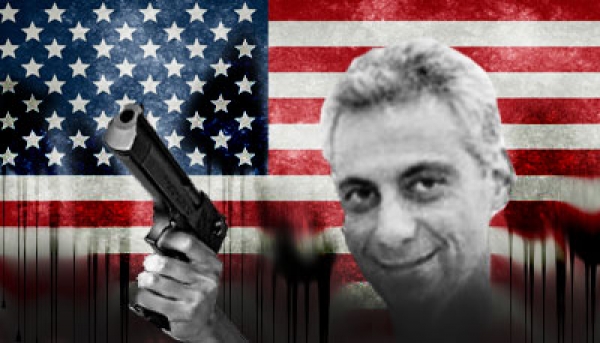 Back in January, U.S. District Judge Edmond Chang said that it is the government’s duty to protect constitutional rights in a ruling that overturned Chicago’s ban on the sale and transfer of firearms, ordinances that represented some of the toughest gun control laws in America.

Undeterred, now Mayor Rahm Emanuel is proposing a shiny new ordinance that would use special zoning rules to essentially block gun stores from operating in 99.5% of Chicago and deter any future gun businesses from opening in the scant space left.

Whatever gun shops that might try to remain in the pockets left in the South, North and West sides of town that represent the 0.5% of Chicago where the new zoning rules do not apply would have to follow a bevy of rules to not only open their doors, but to keep them open.

Requirements include that each and every gun purchase be videotaped at the point-of-sale “to deter customers from buying firearms for crooks,” according to the Chicago Sun-Times. Owners would also be required to produce a security plan that is pre-approved by Chicago police before the store could officially open up shop, in addition to completing quarterly sales audits and allowing the police to freely inspect all sales records.

That’s on top of the shop not being located within 500 feet of a school or a park in that 0.5% of Chicago that’s not zoned out.

According to the report these new ordinance recommendations were based on, less than 40% of the guns recovered in Chicago crime scenes were even purchased in the state of Illinois to begin with; Indiana was the biggest source of out-of-state guns recovered there, prompting the following statements:

Those findings — which mirror those in previous studies — support the need for a federal law specifically outlawing gun trafficking, such as a measure proposed by U.S. Sen. Mark Kirk, R-Ill., the report said.

So basically because the actual handgun ban was found unconstitutional, Emanuel is going to regulate guns in every other way possible with what essentially boils down to a bunch of legal hoops and a long-winded game of semantics.

Sure citizens of Chicago, you can have your 2nd Amendment rights, but…

…First you have to actually find a gun store in the 0.5% of Chicago not zoned out which then passes police safety inspection and is then willing to operate by continuously jumping through all these new regulatory hoops (in addition to all the pre-existing state and federal regulatory hoops already in place for gun stores)…

…Then you too can line up around the block and get filmed the whole time like you are a guilty-until-proven-innocent criminal just for the “privilege” to buy a gun in Chicago in the first place.

(Never mind that, in one of the most dangerous, crime-ridden, gang-plagued cities in the whole country — to the point that the FBI bestowed the monicker “murder capital” on it back in 2012 — you might dare to want to protect yourself…)

“There is no question it will be the smartest, toughest regulation on gun stores in the country,” said Janey Rountree, the mayor’s deputy chief of staff for public safety. “It’s designed to prevent gun trafficking and illegal sales in these stores.” (source)