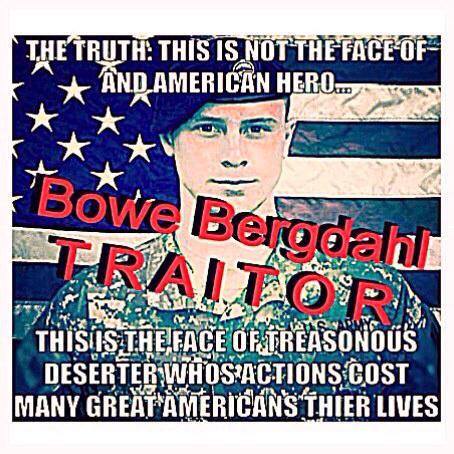 A new Facebook page sprang up a little over 24 hours ago called Bowe Bergdahl is a Traitor. This is a page where the soldiers are speaking about their experiences. Most of them are doing so anonymously so it is impossible to vet any of the stories, but the reports seem consistent. It is understandable that our finest would wish to remain anonymous as they may be divulging sensitive information, in some cases, and some are still  on active duty.

Here some of the more interesting status updates that I have found thus far, beginning with the status that features the quote in the article title. Before you proceed please understand that there is some profanity. Also I have quoted the longer statuses below so that you do not have to go to Facebook to read them (for our readers who do not use Facebook):

Shit is about to go down! Stayed tuned for this one

I’m fucking sick of people that are barely gripping on to their relevancy amongst this generation dick riding this Bergdahl cocksucker or even suggesting we stand down until the dust settles. All they are doing is exposing their own irrelevancy and how incredibly out of touch they are with the people they consider to be their “target demographic.”

SO, that being said, OAF being OAF, tomorrow night we will share an article on the TRUTH from someone who was part of the SOF package tasked to recover this shit head while keeping OPSEC in mind of course. See you then and in the mean time please refrain from dick riding jihadists.

As of this writing, this is the status update that is pinned to the top of the page. It is very interesting reading:

“We were at OP Mest, Paktika Province, Afghanistan. It was a small outpost where B Co 1-501st INF (Airbone) ran operations out of, just an Infantry platoon and ANA counterparts there. The place was an Afghan graveyard. Bergdahl had been acting a little strange, telling people he wanted to “walk the earth” and kept a little journal talking about how he was meant for better things. No one thought anything about it. He was a little “out there”. Next morning he’s gone. We search everywhere, and can’t find him. He left his weapon, his kit, and other sensitive items. He only took some water, a compass and a knife. We find some afghan kids shortly after who saw an american walking north asking about where the taliban are. We get hits on our voice intercepter that Taliban has him, and we were close. We come to realize the kid deserted his post, snuck out of camp and sought out Taliban… to join them. We were in a defensive position at OP Mest, where your focus is to keep people out. He knew where the blind spots were to slip out and that’s what he did. It was supposed to be a 4-day mission but turned into several months of active searching. Everyone was spun up to find this guy. News outlets all over the country were putting out false information. It was hard to see, especially when we knew the truth about what happened and we lost good men trying to find him. PFC Matthew Michael Martinek, Staff Sgt. Kurt Robert Curtiss, SSG Clayton Bowen, PFC Morris Walker, SSG Michael Murphrey, 2LT Darryn Andrews, were all KIA from our unit who died looking for Bergdahl. Many others from various units were wounded or killed while actively looking for Bergdahl. Fighting Increased. IEDs and enemy ambushes increased. The Taliban knew that we were looking for him in high numbers and our movements were predictable. Because of Bergdahl, more men were out in danger, and more attacks on friendly camps and positions were conducted while we were out looking for him. His actions impacted the region more than anyone wants to admit. There is also no way to know what he told the Taliban: Our movements, locations, tactics, weak points on vehicles and other things for the enemy to exploit are just a few possibilities. The Government knows full well that he deserted. It looks bad and is a good propaganda piece for the Taliban. They refuse to acknowledge it. Hell they even promoted him to Sergeant which makes me sick. I feel for his family who only want their son/brother back. They don’t know the truth, or refuse to acknowledge it as well. What he did affected his family and his whole town back home, who don’t know the truth. Either way what matters is that good men died because of him. He has been lying on all those Taliban videos about everything since his “capture”. If he ever returns, he should be tried under the UCMJ for being a deserter and judged for what he did. Bergdahl is not a hero, he is not a soldier or an Infantryman. He failed his brothers. Now, sons and daughters are growing up without their fathers who died for him and he will have to face that truth someday.”

My take is he deserted his post in combat. Court Martial and Leavenworth. And since when do we negotiate with terrorists?

So what do you think? Is Bowe Bergdahl a traitor?