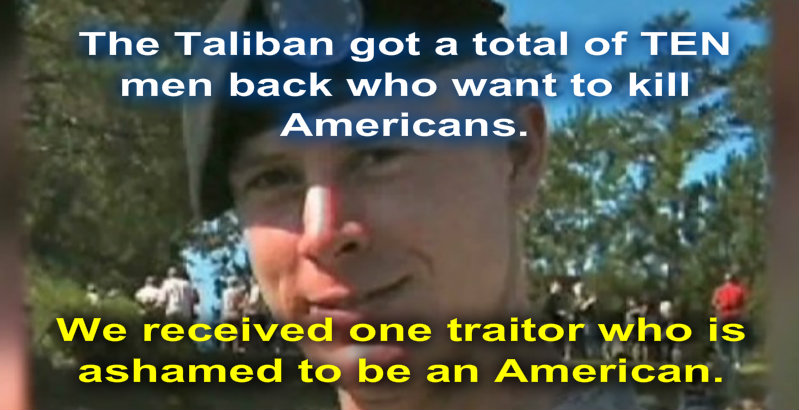 In late July of 2013 there was a release of 5 Guantanamo detainees as a good will gesture to the Taliban. In other words, they got five of their people back and we got the right to open peace talks with them. Do you find that the least bit submissive? It was not widely reported, because compared to the news of that time it seemed relatively insignificant.

I had somewhat forgotten about this release and stumbled upon it by accident in our site archives. But in light of the Obama Administration trading five very dangerous Taliban leaders for a traitorous American deserter who once told his father that he was ashamed to be an American, I think this is very important.

Whether it supports the view of many, that Obama is a secret Muslim and terrorist sympathizer, or if it just proves that he is an incompetent idiot, the math is pretty clear. We released ten Taliban terrorists and got nothing but a liability in return.

Here is an excerpt from our August 2013 report which was quoted from Breitbart.com:

Without an official announcement or any publicity, the Obama administration released five members of the Taliban from Gitmo in order to open peace talks in Afghanistan.

Ynetnews.com reports that “a top U.S. official said the prisoners were released under the condition that they will not engage in any violent activity.”

The terror activity of those released is not in question. Rather, their release is intended as a gesture to get peace talks rolling between the U.S., Afghanistan, and the Taliban.

Although this release is a stark departure from the standing U.S. policy of “zero tolerance [of] negotiations with terrorists and releasing of prisoners,” Obama’s State Department has may have found a loophole via their reluctance to define the Taliban as a terror group as of late.

You can read more through the original source of the story which broke at YNetNews in late July of 2013.

One thing is for certain. We have given a lot more away than we are getting back. Again, whether this makes Obama a complicit Muslim or simply a blithering idiot is open for debate. But my opinion is that his track record will clearly show that Obama is no idiot and outside of the American people, and especially people in the Muslim world, most tend to understand exactly who Barack Obama is.

Why can we not see it here?