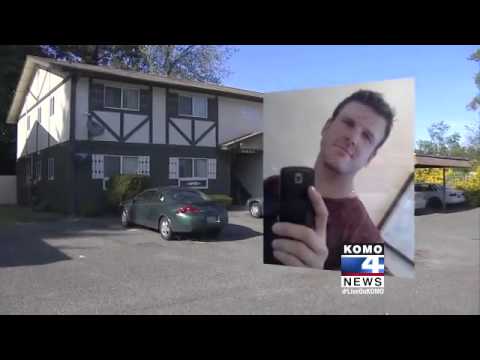 This is increasingly redundant but extremely necessary to draw attention to- yet another incident of a man savagely beaten to death by police, this time, in Washington State, a few weeks ago.

44 yr old Ron Hillstrom was having a ‘delusional mental episode’, however he was not dangerous, and he was the person who requested the police be called in the first place.

He came to the police state for help, only to have his request be returned with a beating with metal flashlights and batons, and his request for help from the police of course ended in his savage death.

Countless neighbors, among them Ashley Patterson, saw the whole thing.

Ashley says “He was kinda running around like this,”, and she ran around in a circle to demonstrate.

“They’re out to get me! They’re trying to set me up!”, another eyewitness says Ron yelled, before the police came to get him.

Around 9:45, Pierce County Sheriffs approached Ron Hillstrom, and the eyewitness neighbor Ashley says, 4 officers surrounded Ron and all fired their tasers at him simultaneously.

“I see four officers walking up on him and they’re like, ‘It’s the police,’ and he’s like ‘You’re not the police’, and he goes to run in the circle and as soon as he comes back the police used four tasers at one time,” Ashley says.

Multiple cell phone videos recorded the officers with their knees in Hillstrom’s back, tasing him and beating him with various objects, while he cried “Help! Help me,”

“One cop had his knee right on his neck, holding him down,” said a third eyewitness.  “The other one was down by his feet and two were on each side of him.”

“And then they started beating him. And they just weren’t done until he was dead,” said a fourth witness.  “Bam, bam, bam,” she said.  “It was horrible.  It was absolutely horrific.”

Hillstrom was taken into custody, and died of unknown causes an hour later.

“I knew last night they were gonna kill that man,” Ashley said. “You beat this man to death last night for no reason and we caught you. Period.”

Police of course say this man ‘charged at him’ , and it was justified, and that a screwdriver he was holding was a weapon, though he did not strike anyone with it.

The police could be facing serious, serious consequences because the people who witnessed this are standing up hard.

Currently the officers are simply taking a paid vacation, the only punishment most officers face for brutal indiscriminate murder.

“No, he did not charge the police, he was just doing what he was doing before the police came,” the second eyewitness said.

“It appears that this is a guy who was reaching out for help, literally requesting help and instead of getting help was given a death sentence,” said the family attorney.

This is yet another, extremely common nowadays, incident of the police committing straight up murder, brutal, savage murder.

Please share this with absolutely as many people as possible, especially people who still believe the police are performing a vital, beneficial role in society.

No one can reasonably deny the deep problems of our corrupt police state at this point.