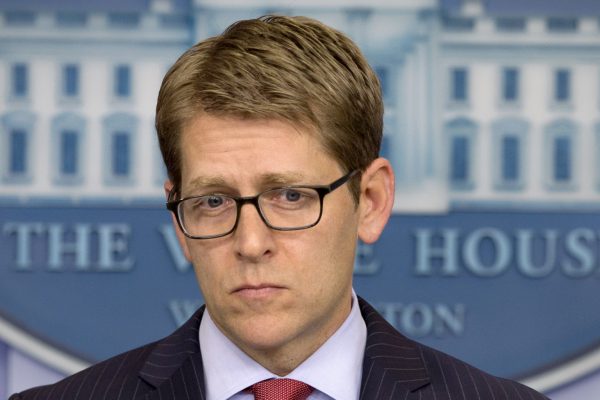 Is it a coincidence that Jay Carney’s resignation was tendered just before the Bowe Bergdahl/Taliban prisoner swap was announced?

We may never know.

However, without granting sympathy in any form, you have to think that even a paid liar has his limits. On Monday, The Daily Standard resurrected a quote from the archives that came from the lips of Jay Carney in June of last year:

“With regard to the transfer of Taliban detainees from Guantanamo Bay, we have made — the United States has not made the decision to do that, though we do expect the Taliban to raise this issue in our discussion, if and when those discussions happen,” Carney said. “As we have long said, however, we would not make any decisions about transfer of any detainees without consulting with Congress and without doing so in accordance with U.S. law.”

The press secretary reiterated the need to consult Congress when asked again if the White House had ruled out a potential swap with the Taliban.

Yesterday we reported that the United States had previously released 5 Taliban members in July of last year. I wonder if they consulted congress before that move? The story was barely circulated by the media and could have conceivably flown under the radar with most members of congress.

So was the latest prisoner exchange just a broken promise or was it breaking the law?

Lastly, the Obama Administration has proven once again that it is not interested in following the letter of the law. The Washington Post reports that this prisoner exchange was in violation of established laws that are meant to include the appropriate committees in congress.

Top Republicans on the Senate and House armed services committees went so far as to accuse President Obama of having broken the law, which requires the administration to notify Congress before any transfers from Guantanamo are carried out.

Lawmakers were not notified of the Guantanamo detainees’ transfer until after it occurred.

The law requires the defense secretary to notify relevant congressional committees at least 30 days before making any transfers of prisoners, to explain the reason and to provide assurances that those released would not be in a position to reengage in activities that could threaten the United States or its interests.

So what do you think? Is Jay Carney simply tired of the “liar for hire” game? Did he miraculously grow a conscience?

My guess is that he will end up with a wonderful private sector job out of this, just like many before him. Napolitano, Petraeus, etc.

I don’t know what to think. All I know is that there is no sympathy for the devil and none for the devil’s advocate either. You made your own bed Jay Carney. Now go accept that lucrative gig that is waiting for you.

That will teach you a lesson.