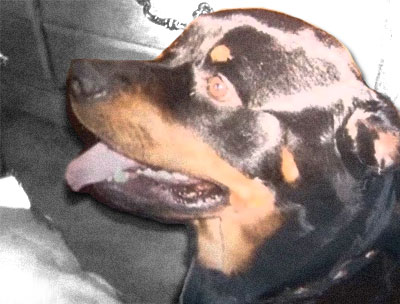 The debate centered around cops shooting dogs. Apparently police officers from Round Rock, Texas had responded to a burglary alarm at a private residence, and arrived to find the front door ajar. They went inside to sweep the house, only to be confronted by the home owner’s eight-year-old, 120-pound rottweiler with hip dysplasia.

The officers proceeded to reportedly shoot the animal a combined total of seven times; one officer firing one round, while the other fired six.

The debate centered around what people thought. One of the deejays argued that the Round Rock PD had already offered to buy the owners a new dog, so it was ridiculous that “some ambulance chaser” would wind up getting them an additional 100-500k for pain and suffering on top of it. The seemingly obligatory female deejay played the sympathetic role, talking about how the pet was the residence owners’ baby. Then some guy called in with the rebuttal that a dog “can’t make no woman pregnant” so therefore it doesn’t count as family (couldn’t make that one up if I tried).

Officers killing dogs in “the line of duty” — how common is this becoming in modern America? Seems like no more than three days go by before I hear about a new pet dog slain at the hands of police who, in most cases, were called for help.

A bunch of thoughts instantly ran through my head during the radio show debate, most all of which I found were (conveniently) summed up for me in the comments section of this Austin American-Statesman’s story about the dog shooting:

The only thing I didn’t immediately find was the thought that this really just makes those cops look weak and pathetic as far as police officers are supposed to be concerned. Cops are supposed to “protect and serve,” no? To be so scared of a dog that you don’t A) just shut the door instead, B) get the hell out of there or, even C) result to using a taser, but instead instantly unload seven shots into a dog says a lot about you.

Itchy trigger finger, much? What if the couple’s child had been in the home? Elderly relative with a hearing problem?

Someone who reacts to a dog inside the dog’s own home by instantly mowing it down with bullets isn’t necessarily someone I would ever want to call when I’m in trouble.

But that last commenter makes the real point here. Used to be, we lived in a society where if you thought your house was being or had been broken into, your first inclination might be to call the police for help.

Now we live in a police state, and if you own a dog, you might want to think carefully about how much your stuff is worth before you dial 9-1-1. Are your belongings worth more than the life of your pet? More and more, that’s the choice people have to make in modern America.

Sure, you might read this story and say, “Yeah, but that dog was a 120-pound rottweiler. That’s a seriously scary dog (not always true, but go on). If you were a police officer and that dog was coming at you (something we don’t know for sure even happened in this case), you might do the same.”

Fine. Say that. But it doesn’t really explain why cops are also responding to 9-1-1 calls and killing everything from an 11-year-old, 12-pound dachshund, to a pregnant chihuahua, to a freaking puppy, does it? Because those dogs were all shot by cops in “the line of duty” too.

They do it, and all they have to do to justify it is say they felt threatened (via Huffington Post):

When police officers shoot dogs, departments usually deem the shooting justified if the officer felt threatened by the animal. But an officer’s perception doesn’t always mean the animal actually was a threat. In recent years, police officers have shot and killed chihuahuas, miniature dachshunds, Wheaton terriers, and Jack Russell terriers. Last month, a California police officer shot and killed a boxer puppy and pregnant chihuahua, claiming the boxer had threatened him. The chihuahua, he said, got caught in the crossfire. When a San Bernardino, Calif., woman called police to report a burglary in progress behind her house last month, they responded, jumped her fence to confront the burglars, then shot her dalmatian mix, Julio. He survived. Police officers have also recently shot dogs that were chained, tied, or leashed — obviously posing no real threat to officers who killed them. [emphasis added]

Why are cops, those supposed societal protectors, so easily “threatened” by seemingly any dog? It goes without saying (but typing that means I’m saying it anyway) that if you are a police officer who is so utterly jumpy and easily scared that a pregnant chihuahua threatens you, at the very least you are probably in the wrong line of work.

National records are not being officially kept on how many dogs are shot by cops in “the line of duty” each year; I think it’s safe to say that if they were, the figures would probably horrify most people.

Oh, and if you are lucky recipient of a no knock raid, it’s apparently almost guaranteed your dog is going to die (even if you are innocent and the cops just accidentally went to the wrong house, which is also occurring more and more these days):

In drug raids, killing any dog in the house has become almost perfunctory. In this video of a 2008 drug raid in Columbia, Mo., you can see police kill two dogs, including one as it retreats. Despite police assurance that the dogs were menacing, the video depicts the officers discussing who will kill the dogs before they even arrive at the house. During a raid in Durham, N.C., last year, police shot and killed a black Lab they claimed “appeared to growl and make aggressive moves.” But in video of the raid taken by a local news station, the dog appears to make no such gestures. [emphasis added] (source)

Just out of curiosity, I typed “police kill dog” into a search engine just to see what would pop up from the past month. One of the first returns was a Google+ posting via The Free Thought Project from May 8, 2014. It was titled, “15 Stories of Cops killing dogs”:

Cop Walks up to a Couple’s Tied Up Dog and Shoots it in the Head for No Reason – http://bit.ly/1pWK1lE

If Cops Treat Their Own Dogs Like This, It is No Wonder They Shoot Everyone Else’s – http://bit.ly/PUgyIw

Cell Phone Video Surfaces of Man whose Dog Was Shot After Dialing 911 – http://bit.ly/QBiXZA

The Gamble of Dialing 9-1-1: Another Family Dog Killed by Police After Call For ‘Help’ – http://bit.ly/1fZNmMS

Cop Shoots and Kills Family Dog While it was on a Leash
Read more: http://bit.ly/1g5NDes

Man Calls 911 to Report a Burglary, Cop Shows Up Shoots his Dog and Leaves it Suffering – http://bit.ly/RImrKI

Cops Break Into Private Property and Shoot Owner’s Dog After Serving A Warrant to the Wrong House – http://bit.ly/Khj9d5

Cops Kill Man’s Dogs for not Letting them Illegally Search his Home – http://bit.ly/1izGWo2

Cop with Sinister Past, Murders Family Pet and Brags About It
Read more: http://bit.ly/1jheUKn 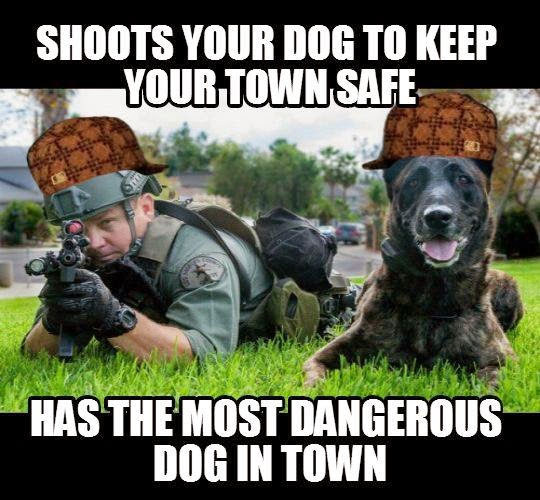 Like I said, there’s no shortage of stories. This sort of thing happens all the time nowadays.

In the aftermath of the Round Rock dog shooting, the Texas Humane Legislation Network has come forward to demand new legislation that would require officers to take an eight-hour training course to distinguish aggressive dog behavior.

Yes, because apparently common sense has fallen by the wayside.

As such, it’s no longer common sense to call the cops if your house gets robbed and you own a dog, unless your possessions are worth more than your pet.