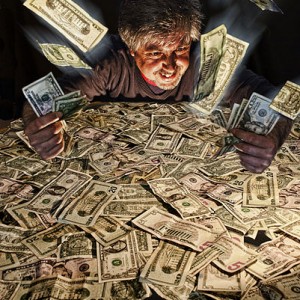 Everywhere you look, Americans appear to be extremely obsessed with wealth and money.  These days, networks such as CNN endlessly run “news stories” with titles such as “Best cars for the super rich“.  We have television shows where people proudly show off how wealthy they are, and it seems like Hollywood is putting out an endless parade of movies that glorify the lifestyles of the elite.  We have hordes of motivational speakers and “life coaches” that will teach you how to be “more successful” in life, and every small movement in the stock market is carefully monitored by the mainstream news media.  Even in the world of faith, we have an entire class of ministers known as “prosperity preachers”, and many of those ministers wear that label quite proudly.  Yes, those that grew up in the 1980s may have been the “greed is good” generation, but the truth is that they didn’t have anything on us.  As a society we love money, and we are not ashamed to admit it.  In fact, there are times we absolutely revel in it.  For example, Time Magazine published an article this year entitled “Science Proves It: Greed Is Good” and hardly anyone even raised an eyebrow.  But where will America’s sick obsession with wealth and money end?  Could it end up destroying us?

I got the idea for this article when I was browsing through CNN’s website.  The following are eight “news stories” about wealth that were featured on CNN just on Thursday alone…

#1 “The richest Americans in history”

#4 “From broke to billionaire”

#7 “America’s homes are bigger than ever”

#8 “Mega yacht with a movie theater”

This is what passes for news these days?

It has been said that we tend to talk about the things that we are obsessed with.

And CNN is clearly obsessed with wealth.

Not that there is anything wrong with having money.

And because we have taught entire generations of Americans that becoming wealthy is one of the primary goals in life, it is creating a tremendous amount of envy, jealousy, frustration and anger among those that have not been able to become wealthy.

In recent years, the level of bitterness and resentment that the rest of the nation has toward the very wealthy has risen to an unprecedented level.  It has become exceedingly apparent that the system is designed to funnel wealth to the very top of the food chain, and many of those at the bottom of the food chain are starting to become extremely upset about this.

Since the last financial crisis, almost all of the income gains have gone to the top one percent of all income earners.  The following comes from a recent Huffington Post article…

Economic statistics show that incomes for the top 1 percent of U.S. households soared 31 percent from 2009 through 2012, after adjusting for inflation, yet inched up an average of 0.4 percent for those making less. Many economists are sounding alarms that the income gap, greater now than at any time since the Depression, is hurting the economy by limiting growth in consumer spending.

And income inequality has become such a hot topic that it has even produced a New York Times bestseller by a French economist named Thomas Piketty.  This is what CBS News recently had to say about his book…

His book has landed on that debate like a bomb. Piketty’s thesis: that the rate of return on capital, such as real estate, dividends and other financial assets, is racing away from the rate of growth required to maintain a healthy economy. If that trend continues for an extended period of time — if wealth becomes ever more concentrated in the hands of a few — then inequality is likely to get worse, says Piketty, 43, who started his academic career as an assistant professor at the Massachusetts Institute of Technology and who now teaches at the Paris School of Economics.

Another reason “Capital” has caught the public’s attention is that inequality is evident in what are by now a host of familiar symptoms. Stagnant pay, except among the super-rich. Soaring health care and education costs. The diminished expectations commonly found in young, especially those lacking college degrees, and old alike, as retirement becomes something to endure rather than to enjoy.

It would be foolish to deny that the gap between the rich and the poor is growing.  Even as the stock market reaches unprecedented heights, the middle class is dying and one out of every five children in America is living in poverty.

On a global scale, the wealthiest one percent now have 65 times more wealth than the entire poorest half of the global population does.

That is an astounding figure.

Most people don’t realize this, but the ultra-wealthy have approximately 32 trillion dollars (that we know about) stashed in offshore banks around the planet.  That amount of money would almost be about enough to pay off the entire U.S. national debt and buy every good and service produced in the United States for an entire year.

Meanwhile, the poorest half of the world’s population only owns about 1 percent of all global wealth, and about a billion people throughout the world go to bed hungry every night.

If greed was going to save the world, it would have done it by now.  At this point, the wealthy have accumulated more wealth than they ever have before.  For example, according to Zero Hedge the total amount of wealth in the U.S. has just hit a brand new record high…

Earlier today the Fed released its latest Flow of Funds report, which showed that in the first quarter household net worth rose from last quarter’s $80.3 trillion to a new record high of $81.8 trillion, driven by a $1.5 trillion increase in total assets while household liabilities were virtually unchanged in the quarter. And since the Fed is onboarding all the liabilities why should households bother with debt: that’s what the central bank balance sheet is for.

As for the proceeds, they go to the mega rich: of the $81.8 trillion in net worth, 70.4% of the total amount or $67.2 trillion, was in financial assets: the higest it has ever been courtesy of just one person: Ben Bernanke, and to a far lesser extent Janet Yellen who however is tasked with picking up Bernanke’s pieces.

But of course most people who are rich are only rich on paper.

So what happens if there is a major financial crisis (such as the derivatives bubble bursting) which causes the total amount of financial wealth in the United States to drop by 50% or more?

What would such an event do to our country?

We are so obsessed with wealth and money that it is truly frightening to think about how we would react as a society if it was taken away.

But this current financial bubble will not last forever.

At some point it will come to an end.

When it does, will our society throw a massive temper tantrum?