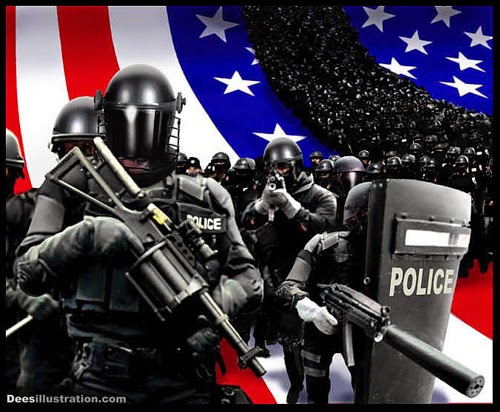 A government which will turn its tanks upon its people, for any reason, is a government with a taste of blood and a thirst for power and must either be smartly rebuked, or blindly obeyed in deadly fear.—John Salter How many children, old people, and law-abiding citizens have to be injured, terrorized or killed before we call a halt to the growing rash of police violence that is wracking the country? How many family pets have to be gunned down in cold blood by marauding SWAT teams before we declare such tactics off limits? And how many communities have to be transformed into military outposts, complete with heavily armed police, military tanks, and “safety” checkpoints before we draw that line in the sand that says “not in our town”?The latest incident comes out of Atlanta, Georgia, where a SWAT team, attempting to execute a no-knock drug warrant in the middle of the night, launched a flash bang grenade into the targeted home, only to have it land in a crib where a 19-month-old baby lay sleeping. The grenade exploded in the baby’s face, burning his face, lacerating his chest, and leaving him paralyzed. He is currently in the hospital in a medically induced coma.If this were the first instance of police overkill, if it were even the fifth, there might be hope of reforming our system of law enforcement. But what happened to this baby, whose life will never be the same, has become par for the course in a society that glorifies violence, turns a blind eye to government wrongdoing, and sanctions any act by law enforcement, no matter how misguided or wrong. Indeed, as I detail in my book A Government of Wolves: The Emerging American Police State, this state-sponsored violence is a necessary ingredient in any totalitarian regime to ensure a compliant, cowed and fearful populace.

According to the learning materials, … there isn’t time for logic and analysis, encouraging officers to fire multiple rounds at subjects because “two shots rarely stops ‘em,” and outlines seven reasons why “excessive use of force” is a myth. Other lessons Jack learned from the “Anatomy of Force Incidents” training in January include a need to over-analyze one’s environment for deadly threats by using one’s imagination to create “targets of the day” who could be “reasonably” shot, to view racial profiling as a legitimate policing technique, even if the person is a child, pregnant woman or elderly person, and to use the law to one’s advantage to avoid culpability.

What we’re dealing with is what author Kristian Williams describes as the dual myths of heroism and danger: “The overblown image of police heroism, and the ‘obsession’ with officer safety, do not only serve to justify police violence after the fact; by providing such justification, they legitimize violence, and thus make it more likely.”If ever there were a time to de-militarize and de-weaponize police forces, it’s now, starting at the local level, with local governments and citizens reining in local police. The same goes for scaling back on the mindset adopted by cops that they are the law and should be revered, feared and obeyed.Police have been insulated from accusations of wrongdoing for too long and allowed to operate in an environment in which whatever a cop says, goes. The current practice is to let the police deal with these transgressions internally by suspending the officer involved with administrative pay, dragging out the investigation until the public forgets about the incident, and then eventually declaring the shooting incident justified based on the officer’s fear for his safety, and allowing him to go back to work as usual. And if, on the off chance, a shooting incident goes before the courts, the judiciary defers to police authority in almost all instances. Just recently, for example, the U.S. Supreme Court declared that police officers who used deadly force to terminate a car chase were immune from a lawsuit. The officers were accused of needlessly resorting to deadly force by shooting multiple times at a man and his passenger in a stopped car, killing both individuals.Meanwhile, the epidemic of police violence continues to escalate while fear of the police increases and the police state, with all its surveillance gear and military weaponry, expands around us.Constitutional attorney and author John W. Whitehead is founder and president of The Rutherford Institute. He is the author of A Government of Wolves: The Emerging American Police State andThe Change Manifesto.