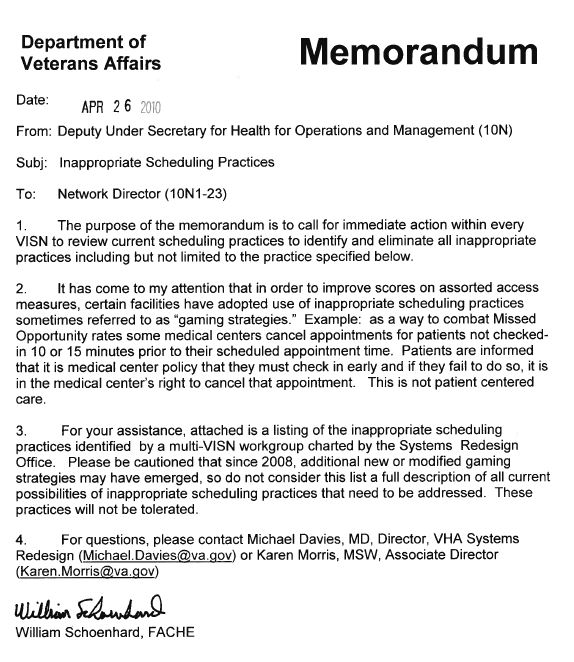 According to a Department of Veterans Affairs “Memorandum” dated April 26, 2010. The Department of Veterans Affairs was very aware of the “cooking of the books” dating back to 2008. This memo was sent to “Network Director (10N1-23) from “Deputy Under Secretary for Health Operations and Management (10N). Signed by, William Schoenhard FACHE. Karen Morris, MSW Associate Director, as well as Michael Davies, MD, Director VHA Systems Redesign are also listed in this memo as contacts for any questions regarding this memo.

“1. The purpose of the memorandum is to call for immediate action within every VISA to review current scheduling practices to identify and eliminate all inappropriate practices including but not limited to the practice specified below.

2. It has come to my attention that in order to improve scores on assorted access measures certain facilities have adopted use of inappropriate scheduling practices sometimes referred to as “gaming strategies.” Example: As a way to combat missed opportunity rates some medical centers cancel appointments for patients not checked in 10 – 15 minutes prior to their scheduled appointment time. Patients are informed that it is medical center policy that they must check in early and if they fail to do so, it is in the medical center’s right to cancel that appointment. This is not patient centered care.

3. For your assistance, attached is a listing of the inappropriate scheduling practices identified by a multi-VISN workgroup charted by the systems Redesign office. Please be cautioned that since 2008, additional new, or modified gaming strategies may have emerged, so do not consider this list a full description of all current possibilities of inappropriate scheduling practices that need to be addressed. These practices will not be tolerated. “

One week ago the entire nation was focused, and enraged about the Veterans Administration. Bombarding the Veterans Administration for their illegal, unethical practices of “cooking the books” which have caused the death of many of our honorable men/women that have served to protect this nation. Our veterans continue to die due to “death panels” while the public’s attention has been diverted, concerned, and focused on the illegal trade of 5 top Taliban leaders for one American deserter/traitor.

While that is disgusting, and illegal, it is also not surprising. We need to stop allowing ourselves to be distracted by those things we cannot control, and focus on what we can. We need to focus on what is going on here at home. What do you say we stand together and help get our veterans the vital care they need? We need to think about arming and training our law abiding citizens. This way if the terrorists do decide to attack us, we the people will be able to defend our country from those that would murder our people.

The first thing that must happen is to get the ultimate terrorist supporter out of the White House by impeachment. He is the ultimate threat to our National Security. There is no doubt democratic candidates running for election this year are extremely happy the focus is now on another one of Obama’s illegal actions in supporting terrorists, instead of being held accountable for failing to do anything about the death panels our veterans and their families are being subjected to right here at home.

The Veterans Administration has admittedly refused care to our veterans for years, which has caused more death by democide”  government than “mass shootings.” The MSM and political pundit gun grabbers love to exploit shootings for their people control gun control agenda, while ignoring the real national security threats and issues within our own borders. MSM refuses to report this disgusting truth. Pay attention because this is what “death panels” are and yes, they will be coming to your personal health care compliments of “Obamacare.” They have disgustingly used the “veterans” as their guinea pigs and have gotten by with it for far too long.

While Obama was “shocked” and “mad as hell” for what he “learned on the news,” once again. MSM even started calling Obama out on his lies. They pointed out Obama not only knew about the Veterans Administration “cooking the books” but that he also promised to fix it when running for president in 2007. Unfortunately for Obama, he ran on the promise of fixing the Veterans Administration problem in 2007. When MSM actually replayed Obama’s speech for the public, people across the country “even some of Obama’s most faithful pundits” became enraged. It certainly is/was very damaging to democrats that are running in this upcoming 2014 election for a seat in the senate. Especially when nothing has been done in the past six years to fix or stop the murder of veterans via “sanctioned care” aka “death panels.” I consider this an act of treason. Death by government “democide” should never become acceptable anywhere in the world.

While John McCain, Obama, and many others within this administration have been caught for years meeting, greeting, and making deals with “real” terrorists, this administration is labeling American citizens as “Domestic Terrorists” or “a threat to national security” simply because they are fighting the abuse of power, high taxes, out of control spending, or simply being a veteran. All while they strategically place Muslim Brotherhood terrorist connected people in very high government positions, helping to influence or implement policy and training manuals. They are attacking us from within. This Administration is targeting our people, our veterans, our children, all while arming and militarizing our homeland to the teeth. Training the police, DHS, EPA, etc.. that “we the people” are the enemy. Nothing the government does is by accident, it is what I call strategic maneuvering.

I do not believe these “death panels” were an oversight, but possibly an attempt to get rid of the “veterans.” Why? Doesn’t this administration consider veterans to be the number one threat? Why? Would it be because they are highly trained and it would be much more beneficial if veterans aren’t around when SHTF? After all, they surely don’t want veterans to be healthy, and able to defend our country from tyranny or terrorists armed by this administration if the need should arise.

It is my opinion, in this administrations eyes, (strategically speaking) it is helpful to their sick global agenda that the veterans die off. By denying care for our highly trained veterans it weakens our ability to defend this nation from enemies both foreign and domestic. All the while this administration promotes the overthrow of our country by globalist elitist foreign rulers via “treaties” with the United Nations. All with “plausible deny ability.”

Note: I would like to say a special thank you to the three individuals that did care enough to issue this memo in 2010. They tried to stop the “gaming the system” and emphatically stated it would not be tolerated, apparently nobody listened. William Schoenhard FACHE. Karen Morris, MSW Associate Director, as well as Michael Davies, MD, Director VHA Systems Redesign. 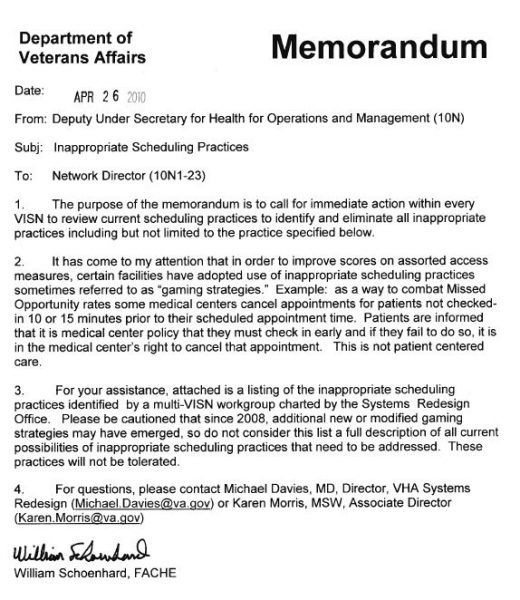