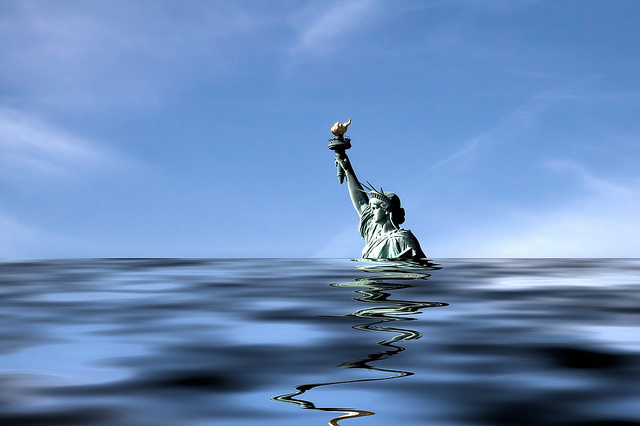 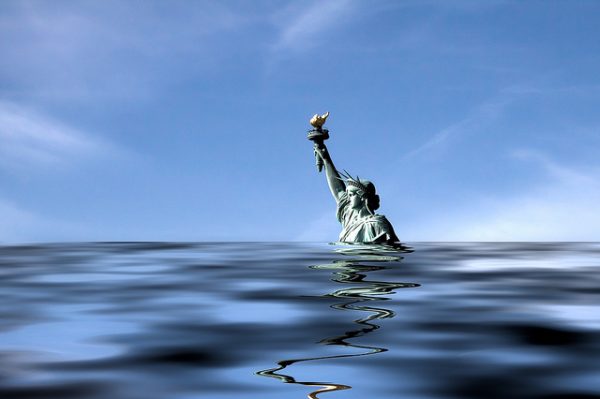 “Daddy, when did America fall? When did we become a Third World Country?”

Someday, many of you young adults will be asked this question by your children who will be unable to find the answer in the Common Core textbooks of the future. What will you say? What will you tell your children about the time America officially became a third world country? You might want to consider the banker-bailout date of 2008 when describing the collapse of America to your future children. America has indeed collapsed and we are living through the “settling of the dust” post-collapse period of our history.

In 1945, at the close of World War II, America produced 50% of the world’s goods despite only having five percent of the population. In a mere 63 years, the bottom fell out of the United States of America. It is tragic, beyond words, what has happened to our country. The following recounts some of the reasons for our decline.

Out of Control Debt

Third world countries have spiraling out of control debt. Standard & Poor’s made it official when it changed its label for America’s national debt from “stable” to “negative.” Subsequently, America is now officially a “Third World country”. Meanwhile, JP Morgan Chase, Citigroup and Bank of America each report billions in quarterly profit, while the US is facing debt restructuring similar to Greece, Italy, Spain and Cyprus. The debt crisis has also spread to nearly every state as 46 states out of 50 states are on the verge of bankruptcy and many of our cities are going broke. Detroit is the epitome of a third world city. America’s infrastructure is collapsing as evidenced by the pitiful condition of our roads which are quickly obtaining Third World status

The out of control debt found in the Third World is constantly being used against these countries by organizations such as the World Bank and the IMF. Globalist banking organizations use the debt to begin to acquire a nation’s infrastructure. It happened in Bolivia through an unholy alliance between Bechtel and the World Bank where water rates quadrupled and it became illegal to even reuse irrigation water runoff and to trap rainwater. Colorado just enacted the same two laws within the past two years. Very soon America, the banksters will own everything aspect of substance. Does anyone still believe the movie, The Hunger Games, wasn’t delivering a clear message as to what lies ahead for all of us unless we can wake up enough people in time and change our course?

What a lot of people don’t seem to realize is that when the Greatest Depression of 2008 hit, the money that once filled the coffers of the American middle class did not just evaporate into thin air. That money flowed somewhere and where it flowed was into the pockets of the banksters and a few of their select minions courtesy of the banker bailouts. Since 2008, cavernous income gaps characterize Third-World nations and the United States is right up there with the worst of the nations with regard to income disparity. The income gap between the rich and poor has increased at a staggering pace, while many more middle-class folks citizens are losing ground on a daily basis.

The Center on Budget and Policy Priorities  report found that the income gap between the wealthiest Americans and middle-income and working-class Americans has more than tripled in the past thirty years.  Did you enjoy your prolonged nap while this was going on?

The CIA’s “Gini index,“ which reports on the world’s income distribution found that the United States has the 40th highest income gap disparity out of 136 nations measured. Nambia is the worst and Sweden is the best. The United States income disparity is comparable to Jamaica and Cameroon. And despite all of our economic woes, the economic free fall of our country has not financially touched the members of Congress as this constitutes another characteristic of Third World countries in which the ruling elite and their law making minions live high off the hog. The net worth of Congress continues to rise despite the onset of the Greatest Depression of 2008. The year 2008, was the year that the Wall Street took over the nation’s money, both nationally and individually and members of Congress laughed all the way to the bank. Financial disclosure forms analyzed by Roll Call magazine, using the minimum valuation of assets, showed that members of Congress, in 2010, had a collective net worth of over $2 billion, which constitutes a $390 million increase from the $1.65 billion members of Congress enjoyed in 2008 at the time of the first bailout.

Slavery As a Means to Fatten the Coffers of the Elite

Most Third World countries practice some form of overt and/or covert forms of slavery which serve to economically benefit the elite. America is no different. The US has simply traded one form of slavery for another. Despite the fact that the United States makes up less than 5% of the world’s population, America’s prisons confine more than 25% of all people who are incarcerated on the entire planet. Several of these prisoners perform labor at twenty-three cents per hour while housed in our federal prisons contracted by the Bureau of Prisons’ UNICOR.

UNICOR is  a for-profit corporation and it is the US government’s 39th largest contractor. Privatized prisons are the fastest growing prisons in the United States and they are normally guaranteed a 90% occupancy rate. This criminal corruption leads to a Third World type of abuse of the public by police departments in order to meet arrest quotas which guarantee the owners of the growing privatized prisons that there promised occupancy rates will be met.  Along these lines, a plethora of stories document how the New York Police Department plants drugs on innocent subjects in their controversial “stop and frisk” program in which, in October 2011, a former NYPD narcotics detective testified that he regularly saw police plant drugs on innocent citizens in order to meet preset arrest quotas.  George H. W. Bush is one of the biggest players in the business of privatized prisons. A constant characteristic among third world nations is a substandard health care system. I recently polled a number of young adults as to where they thought the United States fell with regard to life expectancy as compared to the rest of the world. Before voting, many acknowledged that the US had slipped from its once lofty position with regard to health care. Some people guessed that we had fallen to fourth of fifth in longevity. Some people made even bolder predictions by stating that we might have fallen as far down the life expectancy model as 10th.

What is your vote? How long do Americans live in comparison to our international cohorts? After all, the United States spends twice as much as the average of any other modern country for health care. In the US, we spend 17.6% of our GDP on health care, by far the highest percentage in the world and what do we get for this Third World type of highway robbery?

Now to answer the previous mentioned survey question I posed to the group of young adults which asked how long Americans live in comparison with the rest of the world. Sadly, according to the CIA Factbook, the United States is 50th in world in terms of life expectancy. Hong Kong is eighth and we have fallen behind Bosnia and Herzegovina. Oh, and one other thing, Cubans live longer than Americans.

In fact, in the United States you are far more likely to killed by your doctor than you are by a firearm. Death by doctor exceeded 225,000, two years while death by firearm was only 9,601.

So, Americans are paying far more for health care and reaping Third World type of benefits. Today, health care is not about increasing health and longevity, it is about separating American patients from as much of their hard-earned money as possible. Obamacare, which is off to a disastrous beginning, will prove to be the biggest genocidal and simultaneously bankrupting factor in American history.

The Evisceration of Personal Liberties Everyday freedoms are often a casualty of a society in collapse. The NDAA has eliminated due process from our constitution which destroyed the Fifth, Sixth and Eight Amendments to the Constitution. The Patriot Act eliminated the Fourth Amendment of the Constitution. Obama is threatening to destroy the Second Amendment. During a Presidential declared emergency, FEMA can snatch anything you own, including you, thus, eliminating the First and Third Amendments. The entire constitution is on life support. Homeland Security (DHS) is arming against the American people as evidenced by its recent 2.2 billion rounds of acquired ammunition to go with the 2700 armored vehicles recently purchased by DHS. These police powers typically go hand in hand with collapsing economies in Third World countries which is what we are witnessing in America and the following statistics bear this out.

Do you remember that intellectual giant that occupied the White House prior to Obama? His name is George W. Bush and in typical fashion he ignorantly stated “they (the terrorists) hate us because of our freedoms.”  Do you remember that asinine statement? As with most things uttered by this intellectually deprived ex-President, Bush was dead wrong. The 2012 Legatum Institute’s Prosperity Index, notes that, with regard to personal freedom, America came in at 14th place which puts the US in good company with Uruguay and Costa Rica. And when it comes to the Safety & Security comparisons, America came in at 27th putting the US on par with Bulgaria.  These factors need to be coupled with the fact that our small businesses and American citizens, those who bother to go to work, pay the highest taxes in the world, thus increasing our level of indentured servitude to the bankster run government.

“In 1983, fifty corporations dominated most of every mass medium … In 1987, the fifty companies had shrunk to twenty-nine. … In 1990, the twenty-nine had shrunk to twenty three. … In 1997, the biggest firms numbered ten….Today there are only 8 giant media companies dominating the US media (Disney, AOL-Time Warner, Viacom, General Electric/NBC, Yahoo, Microsoft and Google).

Then there is former award winning CNN special correspondent, Amber Lyon, who left CNN because as she says, CNN was taking money from the federal government to embellish and openly fabricate some stories while not covering other stories.

The concentration of ownership has led to censorship when national and corporate interests overlap and in typical Third World fashion, by default, we have government run media.

The simple solution is to turn off the television.

Who is protecting our children? Who stands for the preservation of parental rights?

The child abduction cases involving Stacy Lynne of Ft. Collins, Colorado and Monika Wesolowski of Fairfax County, VA., stands as a horrific example how agencies of the government can prey upon children, destroy families and make a mockery of our justice system. Any society that is not capable, or willing, to protect its children is worthy of surviving.

America is a conquered nation. When our treasonous Congress approved the theft of the nation’s treasury by Wall Street in the 2008 bailout, a bankster sponsored economic coup d’état took over this country and now we are witnessing the plundering of our personal assets as part of the war booty. What shall we do? My suggestion is read Thomas Paine’s pamphlet, Common Sense, and then start deciding on your own what you need to do.