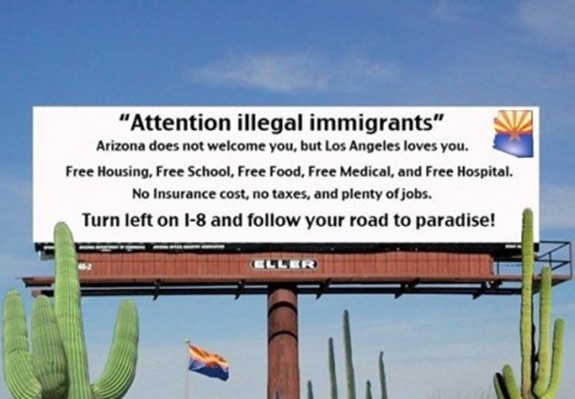 While our military veterans have been shoved aside by this administration as evidenced by the manner in which the Veteran’s Administration has treated them, the Obama administration has decided to roll out the red carpet for illegal immigrants crossing the border by providing funding for approximately 100 American lawyers to help “protect the rights of the most vulnerable members of society … particularly young people who must appear in immigrations proceedings.” This is the announcement made by none other than Attorney General Eric “Fast and Furious” Holder on Friday afternoon.

Justice AmeriCorp, the new group’s name that operates under parent organization AmeriCorps, is aimed at providing critical support for illegal immigrant children who cross the border that may be fleeing from abuse, violence or persecution according to Wendy Spencer, head of AmeriCorps.

Officials expect up to 60,000 foreign youths, children and mothers to cross the border in the 12 months up to October. In the same period in 2011, roughly 6,000 youths crossed the border.

Obama is not expected to block the inflow before the 2014 election, when he will need a high turnout of Latinos to keep the Senate in Democratic hands.

Mexican children and mothers that are caught are sent back home immediately; however, those children, youths and mothers who are from countries such as Honduras, Guatemala and El Salvador are released. In fact, non-Mexican illegal immigrants are provided food, temporary shelter and transportation to bus stations along with assistance in locating relatives inside the United States. Once released by authorities, the illegal immigrants are free to settle in America, to attend school and participate in the economy which employs eight million illegal immigrant workers.

A White House official has stated they are treating these waves of illegals as a humanitarian crisis, which requires more lawyers and aid and fewer border agents. According to Cecil Munro, Obama’s top domestic policy aide, the driving force behind the number of illegal immigrants happens to be the atmosphere in their home country.

“What’s driving this is what’s happening in their home countries, in particular, violence and fear and poor economic conditions,” Munro said.

John Podesta, idiot czar supreme, calls this a “heartbreaking situation” as these people are fleeing violence in Central America and attempting to join their families here in America.

It is obvious Podesta doesn’t know a heartbreaking situation from illegal behavior. How this administration has treated this country’s veterans is a heartbreaking situation. The absolute slap in the face to veterans comes from this administration providing little immediate relief to our nation’s heroes while pouring out money in aid to illegal immigrants regardless of age. It is an outrage that illegal immigrants trump our nations former service members; and that this mess is supported by a bleeding heart public. Instead of supporting those who served to maintain our freedom, they would rather give away aid that could help our veterans to those who are looking for America to “provide them something.”

While the idiots Podesta and Munro blame the conditions of the countries of Central America as the driving force behind the increase in numbers, there is a tell-tale sign that it is Obama’s own policies of non-enforcement and open arms welcome that has truly driven the movement.

As the report continues:

Spanish-language media has detailed Obama’s policies, and so a growing number of Latin American people have heard they and their children will be welcomed.

“I brought her here because I know this is a better future for her,” said one migrant mother from Guatemala who successfully crossed the border in Texas this week with her six year old daughter.

“I need to act right now, because this [welcome policy] will end and my girl won’t have a future,” Nora Griselda Bercian Diaz, told KRGV-TV, in Weslaco, Texas.

According to a report by KRGV-TV, Central American news reports are encouraging their citizens to make the trek to the United States with their children since they “won’t be turned away.” Bercian Diaz claims the message in her country is “American borders are open to all families.”

The New York Times detailed the story of 13 year old Robin Tulio, who was heading across the border to be with his mother who is here illegally and working in Baltimore. Tulio indicated that his mother thought it time to “smuggle” her son into the US because the Obama administration had quietly changed its policy making it more likely that Robin would be allowed to stay.

While the tales of violence, fear and poor economic conditions in other countries may drive some to seek entry into the US, the reports of the news media in these countries claiming America’s borders are open to families crossing illegally are disturbing. Other countries are encouraging their citizens to cross our borders illegally because they will have impunity or amnesty. Is there any question where this idea is coming from? I thought not.

It is known that in certain areas of Mexico and in some Central American countries, drug cartels and corrupt political officials are perpetrating a reign of terror on the citizens. It is tragic, especially when it involves preying on the weak. However, the United States cannot continually allow impunity to those crossing our borders illegally nor can we elevate non-citizens who break the law above our veterans who fought to support, defend, and preserve the law of the land.

Returning veterans, who exit the armed forces, are facing a collapsing economy, poor treatment by this administration under the Department of Veteran Affairs, diminished job growth, scarce jobs period and increasing inflation. All Americans are feeling the crunch these days. With working Americans supporting the remainder of America, including those here illegally through increasing government assistance, there will come a tipping point where total collapse is inevitable. But, this administration doesn’t seem to equate the downfall of America because of their policies as a “heartbreaking situation.”