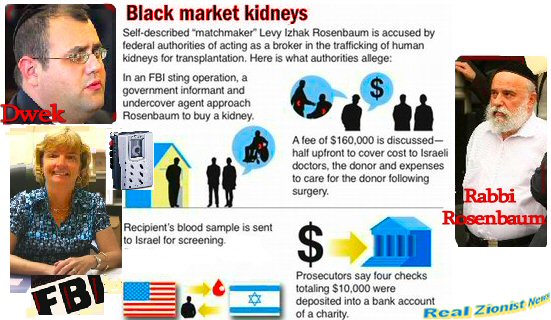 This is a story that is not about race, ethnicity or religion. Some people will make it a demographic issue in order to obfuscate the ubiquitous nature of trafficking crimes involving children. What is the crime? The crime is murdering American children for the purposes of organ theft and shipment to countries such as Israel, Turkey, India, China, et al.

There was a watershed case back in 2009 which nearly broke open the practice of child abduction wide open. The reference was obscure, but for those that would look, there is evidence enough of child trafficking for the purpose of harvesting organs to warrant a detailed investigation.

After having viewed this disturbing report, videoed in 2009, the national investigation trail went cold. Let’s examine the report and its contents chronologically and it will become crystal clear that there are major omissions from this report. which were designed to take attention away from child trafficking for the purpose of organ harvesting.

1. The video reported on multiple New Jersey politicians (e.g. mayors, state representatives) who were rounded up and arrested and accused of laundering money from “ill-gotten gains” and shipping the money off to Israel.

2. Then there was the vaguely reported case of New York City rabbis being arrested for laundering money, and it was reported in what referred to as a “parallel investigation” which was part of this news story.

The fact is that there was no informant. Here is what actually happened. In a later clip in this network report, it was stated that the “FBI also stumbled upon a Brooklyn man who would broker the sale of human kidneys for $160,000 as he would find donors in Israel, who needed the money, who then would fool U.S. hospitals that the donor and recipient were related and would then pay for the organs to go to the Israelis for the purposes of transplant. The report stated that this unnamed man had been doing this for more than 10 years”. “And then prosecutors stated that they found rabbis at synagogues in New Jersey and New York, …who helped launder over three million dollars back into Israel…”  Confused? So was I until I followed the evidence trail.

In order to believe this entire report at face value it would be necessary to believe that Israel does not enforce money laundering laws. Are we also to believe that one informant laundered $650,000 to New Jersey politicians and $3 million dollars to Jewish rabbis? One informant that netted 44 high profile arrests? No way! And then where did the report come from which exposed the organ trafficking back to Israel? Why is this last item even in this story? It’s in the story because this was an international organ trafficking operation that also pulled in local and state politicians.

Did you notice that the reporters did not even have the guts to name the man who trafficked in children’s kidneys? Brian Williams and Katie Couric did not have the guts to say this organ trafficker’s name. His name is Levy Itzhak Rosenbaum and he admitted to “stealing” three kidneys in a plea bargain deal. This case should have opened the eyes for all to see that organ trafficking was operating in the open and prominent members of the community and politicians had involvement in the process.

The “Rest of the Story”

One might wonder if there is any proof to back up my suspicions that American children were being killed and their organs were being trafficked back to countries such as Israel and China?

The United Nations Palermo Convention on human trafficking passed regulations related to human trafficking for organs. This UN agreement has been applied in prosecutions, for human trafficking in Brazil, South Africa, India, Moldova and other countries. The major purpose of the agreement was to prevent human traffickers, many of whom are surgeons, from “exploiting the bio-available bodies of immigrants, refugees, prisoners, the mentally deficient and others from being harvested while still alive”.

Counter Punch reporter Nancy Scheper-Hughes stated that “Transplant trafficking has been going on for many years in the US, as it has elsewhere in the world. The individual cases in the Organs Watch research files run to the hundreds. Some of the victims of US organs trafficking are bonded servants from Syria and Jordan brought into the US to provide kidneys to their patron royal families from the Gulf States. The Cleveland Clinic has a transplant wing that for many years has catered to these so-called “transplant tourists.” UCLA had its heyday with wealthy Japanese Yakuza crime “family members” who were given priority for liver transplants from the UNOS waiting list, livers that technically belonged to US citizens”.

The Cleveland Clinic and UCLA? This leads any rational person to ask what the hell is going on? To those of you who have criticized me over your inability to believe that the elite are engaged in the widespread child sex trafficking, how would you explain away this evidence? If they will steal children’s kidneys, then why would they not traffic their bodies for sex?

The Most Evil and Vicious Occupation

It is worse that drug-running. The people that engage in human trafficking and who murder and harvest organs represent the worst of the worst of the human species. The harvesters are people without conscience and  they do NOT hesitate to kill children for their organs in this most lucrative business. India is a major supplier of organs to the organ theft rings of the elite as is China, Britain, South Africa, Turkey, Russia, Brazil, Moldova, the United States and Israel.

In India, it works there like any other place where they abduct children. In India, children are snatched off of the street, euthanized in a medical facility and their organs are taken. After the 2004 Indian tsunami, several foreign organ extraction teams suddenly showed up in the country in their chartered airplanes and pretended to lend humanitarian aid, but they were actually performing organ harvesting work on the orphans who had survived the tsunami that had taken their parents.

In the United States, Nancy Scheper-Hughes identified several major U.S. hospitals who participate in these heinous practices of illegal transplants in some of the best hospitals on the east coast, including Mount Sinai, Albert Einstein in Philadelphia, and Baltimore’s Johns Hopkins.

Since I first publicized the story of Monika Wesolowski whose four-year-old son was taken and is most likely being sexually abused and very possibly trafficked, nine former CPS agents from around the country have contacted me to speak about the horrific abuses being perpetrated against American parents by CPS. Two of these agents have said that they had knowledge of abduction rings tied to child prostitution and organ harvesting. They are both frightened about the possible consequences of speaking out. However, this fact should not surprise anyone.

Why hasn’t anyone asked the question as to why the federal government will pay a CPS organization approximately $5,000 per child that it takes away from its parents, more money is paid if the child is a minority or has a disability because the parents don’t always have the means to fight back? The child sex slavery ring and child organ harvesting trafficking begins with the federal government as they are paying CPS to seize children. Why does the federal government care if CPS seizes children? The answer should be obvious, this is the modern day version of the Selective Service Act and the subsequent drafting of our children for the right to prey upon their genitals and organs.

To those that think the evidence is weak, you would be wrong. It is just that we have to dig a little harder because the MSM refuses to meaningfully look into the issue. In this story, I have only scratched the surface. The same thing is now going on in Canada. The Spanish claim that the organ transplant industry has transformed its health care system. In Britain, the practice of child snatching is exploding and it is openly discussed. It is everywhere.