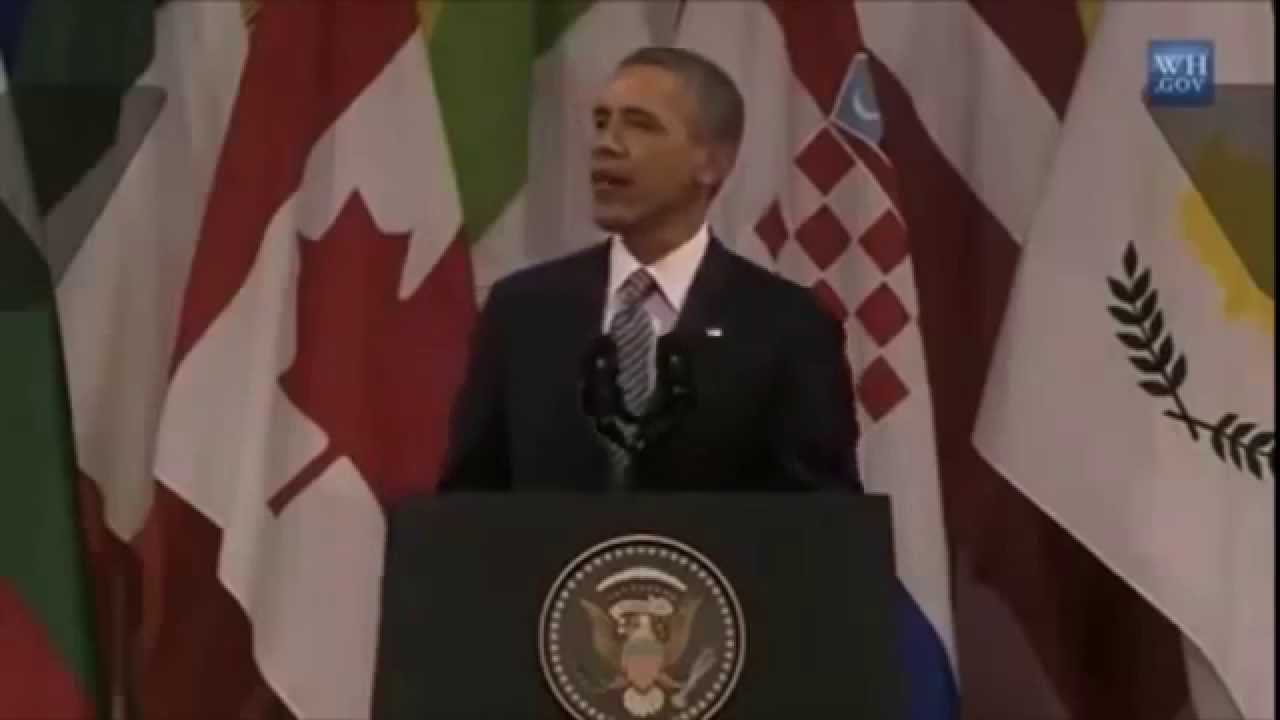 Editor’s Note: I’ve decided to put this at the top since many people simply read a title and never read the content of articles. Then they pontificate about the article’s content as though they read it or even watched the video if supplied. If you don’t read the content of the article, then you have no authority to comment on it. I find this incredibly ironic considering many conservatives are so upset their representatives don’t read legislation before voting on it. I added the full video before publishing Leon’s article, so that you can view it all the way through. These are his words and there is a context. Leon also made sure to point out exactly what context Barack Obama said this in. However, his point was to demonstrate that Obama’s actions speak a lot louder than his words, words Obama claims he disagrees with. Yet, given his actions, it appears Obama is in clear agreement with what his mouth claims he is against. -Tim Brown, Editor – Freedom Outpost

New World Order. Three words that should never be associated with any individual much less the President of the United States, yet these three words can be not just associated with, but laid directly at our Presidents feet due to words, actions and in some instances lack of action. Many would say it is wrong even possibly anti-American to make such a statement, but what else could be said, how else could one explain the actions and inactions of President Obama? Obama has an administration embedded with so many Socialists,
Communists, and possible Marxists, that it would have made General Patton not slap, but punch Obama in the face had he been alive today! Just how in the world can we justify what is going on today in the United States? How in the world has our nation become such a nation of fools? Could this be due to many of us just not paying attention and just voting for a politician with the cool voice? Have we as a nation lost sight of what this nation was founded upon? So many questions and yet, no one seems willing to ask them, especially asking them when questioning the President!

Let us take a few words from the mouth of Obama himself! Once these words are shown, will anyone be brave enough in the Lame stream media to ask Obama just what he meant by stating, “Ordinary men and women are too small minded to govern their own affairs.” Yes, Obama made that statement and it was not a long time ago, it was in a 38-minute plus speech on June 3, 2014 in Brussels, Belgium! Consider that he was speaking in the context of past theories of power, but then consider what his own actions assert. Is his administration not pursuing the same type of governing that he says he is against? Check out the abbreviated version of the speech at the following location.

Now with this in mind we have to ask just what is Obama doing? But we only have to go back to an interview from 2012 to see just what Obama is up to, check out the article, the only interview of anyone who spoke with Obama when he was going to school at Occidental College in California.

Now with the wisdom tossed in with this article, we can now see that Obama is just not worried about the Constitution, but only with doing what he wants to do and that is to possibly become the first king of the United States, or ruin it in making this attempt!

Now in the YouTube video, the full length one (See below), Obama stated very clearly, “And order and progress can only come when individuals surrender their rights to an all-powerful sovereignty.” While his words claimed to be those of past theories of power, there can be no doubt that his actions show that he agrees with the philosophy. In fact, it is hypocritical of Barack Obama to say this is a philosophy of the past when his own administration promotes the same philosophy. It is clear that Obama is now thinking of making a play with the world under what some call “The New World Order,” but one has to wonder why would a man with very little knowledge of the world wish to be so powerful in the world? This can be found in what was stated in an interview with Dr. John Drew, who said that Obama played with the royal family while he was in Indonesia. Could this mean that Obama developed dreams of being a King as he watched the treatment of the royal people he was around while in Indonesia?

In an article by Matthew Continetti, from The Washington Free Beacon, we can see that Obama has no regard for the very people that placed him into office! Directly quoting from this article:

“One evening in March, during a visit to Italy, President Obama asked the U.S. ambassador to round up a bunch of—and I quote—”interesting Italians” for dinner at the ambassadorial residence. The history of the property, the Villa Taverna, goes as far back as the tenth century. Its art collection includes Roman sarcophagi and centuries-old imperial busts. The menu that evening included a variety of pastas, and wines from Tuscany and the regions around Venice. Dinner lasted four hours.”

Could anyone just imagine what the reports would be had any Republican asked for, “..interesting Italians,” or how about this: What would the so-called reporters have said had a Republican called for “…interesting Jews, or blacks, or Indians, or Mexicans,” or any other group for that matter? Yet, Obama gets a free pass once again. Yep, the King, who has no clothes, is not told he is naked! But wait, this story gets even worse in what Obama is really feeling about the very people that placed him into the office!!

Now for those who voted for Obama, maybe it is time that you opened your eyes and passed what we are about to show you from the above referred article. In Continetti’s article, it is revealed what Obama stated about his duties as President, and this came from his own staff!

“The next morning, during a briefing, the president—whose office holds a burden of responsibility matched only by its power—regretted that his job involved duties other than pretentious conversation with extremely wealthy famous people. “One aide paraphrased Obama’s response:

‘Just last night I was talking about life and art, big interesting things, and now we’re back to the minuscule things of politics.”

You know, minuscule things like the maskirovka invasion of Ukraine, the implementation of Obamacare, scandals at the IRS and Department of Veterans Affairs, negotiations with Syria and Iran, withdrawal from Afghanistan. These subjects are far too small and mundane for our president. He prefers contemplative and thoughtful and nuanced symposia on philosophy, quantum mechanics, and how best to spend inheritances—all accompanied by Tuscan wine.”

Now just how does that make anyone who supported this pile of ‘whatever it is’ feel? Why should a President ever utter such words no matter where he may be? Is this due to the fact that Obama is much more relaxed with sitting with people of “higher” standard? This all seems to be Obama’s ideology just blasting out now that he can “do whatever he wants” without any worry from a Congress that has seemingly vanished into some far off neither world not knowing how or what to do!

Let us take a look at what Politico has to state about Obama. Again, quoting from the Washington Free Beacon:

“According to Politico, Obama’s Italian dinner party illustrates the paradox of his second term. “Stymied at home and abroad, Obama recognizes that he is less in control of the Washington agenda than ever in his presidency,” write Budoff Brown and Epstein. “Yet his newfound realism has also given him a palpable sense of liberation.” I find nothing paradoxical about Obama’s recent pattern of behavior, nothing mysterious about the golfing, partying, traveling. It is quite obvious: Obama has given up.”

Now has Obama really given up? We doubt that due to the fact that he still wishes to see our electric bills, as he stated, “skyrocket“! Yes, Obama wants this to happen and he is pushing his minions in the EPA to do his dirty work! So now that those who voted for Obama know, when your “Electric Bills” jump through the roof and you cannot figure out why or how to pay them, thank yourself for allowing this shadow of a man to do this to a nation that could tell the world to go to hell, we have our own oil, gas, and coal! But Obama does not want any of that; he wants the United States to fail under the weight of Solar Power, Wind Power, and any other “Green Energy” he can come up with! The huge problem here is that it takes oil, gas, and coal to develop anything related to any of the “Green Energy“!

We cannot forget that when asked about anything that may implicate himself, Barack Obama’s first words are, “I first learned about it from the same news reports that I think most people learned about this.”

Yes, Obama has screwed the very people he said he would help. Now how is that for a new way to garner votes? Screw the very voters that got you into office! It’s sort of like what someone else did back in 1939!

Here is the full version of the speech:


Leon Puissegur is a Disabled Vietnam Veteran with 3 children and 9 grandchildren. He has been married to the same wonderful lady for 43 years. He is an award winning author and has been writing opinion pieces over the years and in just the last few years has written 4 books and a large amount of articles on many sites. You can purchase his books at Amazon. Pick up his latest The Oil Man.