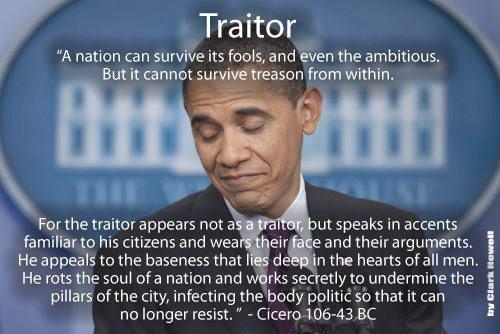 It’s no secret of my hate for Obama. I’m certainly not politically correct, but I do try not to use the word “hate” loosely. My disdain for Obama has nothing to do with skin color. It’s his arrogance, lawlessness and what he has done to fundamentally change our country. However, it goes deeper than policy. Obama’s disrespect for the office he holds and his distaste for United States Military is appalling. President Reagan made Americans feel good, believed in peace through strength, and had so much respect for the Oval office he wouldn’t remove his suit jacket. Could you imagine President Reagan funding and negotiating with our enemy?

There’s no doubt that President Barack Hussein Obama’s a Muslim. He despises everything to do with Christianity and traditional America. When Obama said, “America is no longer a Christian Nation.” he was simply stating his goal to infiltrate America with Islam. Obama has done everything possible to destroy American freedom and liberty.

Obama’s scandals are so rampant that they are hard to name in a single breath. The most destructive of all his scandals is the most recent trade he made with America’s enemy. The trade of five Taliban terrorist for an American Muslim sympathizer. Traitor Army Sergeant Bowe Bergdahl deserted his platoon at war time. Under the Uniform Code of Military justice article 85, a deserter who deserts his post at the time of war is punishable by death. Obama’s goal was to distract the American people from VA scandal and many others lurking in the background.

Congress just recently selected a bipartisan committee to investigate the deaths of four Americans that died in Benghazi. Obama gave $500 million dollars to Al Qaeda terrorists for weapons that were used to kill our four dead Americans in Benghazi. The Benghazi Committee claims the US government allowed arms to flow to al-Qaeda-linked militants who opposed Muammar Gaddafi. Their rise to power, the group says, led to the Benghazi attack in 2012.The group claims the strongman Gaddafi offered to abdicate his presidency, but the US refused to broker his peaceful exit. Benghazi was a failed kidnapping plot by Obama so he could look Presidential just in time for 2012 election. US Ambassador Chris Stevens was to be captured and traded for ‘blind sheikh’ Omar Abdel-Rahman, who hatched the 1993 WTC bombing plot.

President Obama vowed to use a pen to enforce his agenda by passing Congress and the American people. Obama objected and override constitutional and moral laws on the verdicts of balancing the budget, czars, Obamacare, drilling for oil, the protection of marriage, homosexuals in the military, immigration, state law, the banking industry, the 2nd amendment, separation of powers and more. President Obama sees himself as above the law. In the name of his subtle and deceiving concerns and personal causes, Obama has rapidly transformed our republic into a tyrannical lawless state.

Obama’s actions are incomprehensible. Many times I had contemplated whether Obama was incompetent, purposely trying to destroy America or both. The exchange of the five Taliban terrorists for an American traitor displays Obama’s vast hate for America. Many American lives were lost because of those Taliban terrorists. Obama’s activities are a slap in the face to our military men and women who wear a uniform. Obama has surrounded himself with the most rabid, radical, socialist academicians today. He has fought for abortion procedures and opposed rulings that protected women and children that even Planned Parenthood did not seek to support. He is openly hostile to business and aggressively hostile to Israel. The scandals keep piling high but yet the Emperor has yet to be held accountable. Although he claims to get to the “bottom of it” on IRS, DOJ, NSA, Benghazi, V.A. and so on, he is the most dishonest political figure I have ever witnessed. Even by the low standards of his presidential predecessors, his narcissistic arrogance is unequaled. Using Obama as the bar, Nero would have to be elevated to sainthood. The Emperor has yet to be held accountable for any of his actions.

It’s revolting how the media and liberal democrats continue to cover up Obama’s lies and destruction. Is the Democrat Party afraid to stand up for what is right in fear of destroying the first black President? Does the Democrat Party believe a black American is capable of being a great leader rather than a Chicago thug? If we could impeach a President for lying under oath, certainly we can prosecute a President for funding and negotiating with our enemy. Obama has committed numerous acts of treason. Treason is punishable by death. You decide.