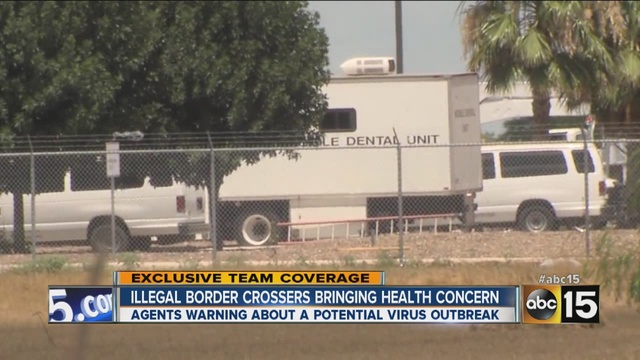 The issues revolving around immigration have left many in American frustrated, angry and in some cases stunned. US citizens have discovered that Central American countries are reporting on news networks that the “US is open to all families,” prompting individuals, not just mothers and children, to head north to cross the border. Once there, some are taken to “holding facilities,” one such being in Arizona, or being sent to stay with relatives located across the country. Border agents are “standing down” in this invasion to our country from illegal entrants from the countries of Honduras, Guatemala, and El Salvador, while turning away those from Mexico. It has been reported that the US government will be providing legal services to these illegal immigrants to ensure their rights while our veterans continue to receive care that falls far below sub-standard veterinary services to animals. On top of all of this, there is the continued drug smuggling, terrorist organization invasion, human trafficking endeavors and a host of other criminal activities stretching across the border into the US.

All of this should be enough indication that any individual with common sense would view the current non-enforcement of current immigration laws as rampant lawless and nonsensical. Intelligent individuals would see the problem stemming from lack of enforcement and not the immigration laws themselves. While many individuals who support an open border stance based on their “bleeding heart” tendencies and other individuals support amnesty because of the number of illegals already residing in the US, these individuals fail to use common sense to understand the threat posed by throwing caution to the wind with open borders and amnesty.

A commonly overlooked threat with regard to the problem with the unregulated pouring of illegal immigrants across the Southern border is the entrance of individuals with serious, contagious infectious diseases. According to the report by ABC15 Arizona, border patrol agents are seeing illegals crossing the border who have infectious diseases then being transported all over the country increasing their concern over a viral outbreak in the United States. So far, agents have reported seeing scabies, chicken pox, MRSA staph infections and other different viruses.

In fact, according to Border Agent and GrandeValley Union representative Chris Cabrera, some border patrol agents have contracted scabies. Cabrera said, “There’s been an outbreak of scabies that’s been going on for the past month.”

While detention facilities have quarantined areas for illegal immigrants who are sick, the only barrier separating the healthy from the unhealthy is yellow caution tape according to Cabrera.

Jorge Garcia, Texas border resident, stated he believed the contagious viruses are not confined solely to the detention center. In fact, Garcia told ABC15 Arizona, a group of illegal border crosses knocked at his door with a sick 7 month old infant. Garcia stated the infant had a high fever and was shaking. Garcia also indicated that word of the contagious skin infections was spreading and causing concern.

“Just the fact that we are exposed to it, and so is everyone here in south Texas, it’s a great concern to us,” Garcia said.

The report from ABC15 Arizona indicated the Department of Homeland Security has called in Coast Guard medic teams to deal with sick illegals, but also declined a request from the news organization for a tour and interviews with professionals treating unhealthy immigrants.

This report is more than likely just now bringing to light something that has been ongoing. And to reiterate, illegal immigrants are being transported, dispersed or released to travel to relatives located throughout the United States, which means the risk of contagion from viral infections to vast populations increases. Remember, these are just the layman recognized viruses the Border Patrol agent has indicated. There could be more serious contagious viral infections that have not been recognized or not reported. Just as Agent Cabrera indicated, there are possibly individuals crossing the border who are asymptomatic but are carriers of infectious diseases along with individuals who are asymptomatic, checked and released who develop symptoms later.

The common incubation period for infections can be two weeks. So, an individual can contract a virus or infection and not exhibit symptoms for 14 days. Remember, that next time you develop symptoms of a virus or infection. Even though someone may be asymptomatic, they are still contagious. Most non health care individuals do not walk around with personal protective equipment on them at all times nor do they use it all the time.

Immigration laws serve several purposes. Not only does it protect citizens from an invasion of cultures that seek to subvert our government, it protects citizens from an invasion of potential health risks that could be devastating to our population and health care system. When an American decides to travel internationally for a visit or extended stay, the individual is required to check into required immunizations for the area. This is not only to protect the individual, but also our population from individuals returning with a contagion that could cause a pandemic. Are Americans supposed to accept the risk of potential contagions brought in by illegal immigrants because of some “touchy, feely, break our heart” liberal rhetoric peddled by the left and now our own government?

According to the amnesty pushers, the answer to that would be “yes,” as us anti-amnesty individuals and/or conservatives are against immigration, are racist and are an entire list of other names. Just to clarify, as an individual who is conservative and against amnesty, I am not against immigration. Anyone who seeks to live in America, become an American and integrate into our society and culture are welcome as long as they follow our immigration laws.

Those who come to America by not following the immigration law or bypassing our immigration laws are breaking the law, period, and do not deserve amnesty or pathway to citizenship regardless of age, gender, or how they got here.

But, our government nor liberals seek to allow entry into this country for those who seek residence in the United States who have followed the immigration laws, are productive and have waited for years to be awarded their status as legal immigrant. Our government and liberals seek to flood the country with those individuals who will vote for Democrats, the liberal agenda and ever shrinking liberty and freedom. Legal immigrants are more likely to preserve liberty and individual freedom, which America was founded upon, as the opportunity for success based upon a person’s ability and the freedom to exercise their ability to the fullest extent.

Instead of promoting legal immigration through admission of those individuals who have followed the US immigration laws, our government shuns those individuals in favor of lawbreakers, some of whom risk transmitting infectious diseases to our population thereby creating another crisis to be managed by America. With the ongoing VA scandal and the treatment received by our veterans, Americans should be wary and distrustful of the government’s ability to handle any type of health crisis resulting from a potential infectious disease outbreak since routine care is an insurmountable task. In the case of a possible pandemic, how would our government handle that? With the current atmosphere in Washington and the attitude of those in government, one only has to watch the movie “Outbreak” to possibly understand what their grand solution would be.