I picked up the following report and video from James White at Northwest Liberty News:

As many who study the “war on terror” will agree, the apparatus implemented by the Federal Government to fight the phony war has been turned around on the American populace.  Almost all large cities, and many smaller ones, have beefed up their armaments to ridiculous levels.  Even the NY Times has noticed this phenomenon.  Living within the sparsely populated Flathead Valley, one would think us immune from DHS intervention.  However, with Kalispell, Montana being one of the hubs of the Liberty Movement, it comes as no surprise that DHS has set-up shop here.

In the interview below, I speak to an eyewitness who followed four of these vehicles through town.  At one point, they were flanked by air support with a .50 caliber machine-gunner on back.  Please take the time to comment on this article below if you live in the Flathead Valley and you have seen similar vehicles.

Apparently the caller was talking about the “Weapons of Mass Destruction Civil Support Teams” that are a division of the DHS. This is a federally funded program that puts National Guard troops under the DHS umbrella. Regardless of the incident, the fact that National Guard troops are rolling around in vehicles with DHS logos is enough to make me question what is going on in this country.

The more immediate question is whether these four vehicles were actually responding to a threat or if it was a drill that the caller encountered. Chances are that it was a drill at the very least because of the presence of the Chinook helicopter.

I found a document published by the 103rd WEAPONS OF MASS DESTRUCTION CIVIL SUPPORT TEAM. That unit is out of Alaska but it is good reference to explain what they do.

What is the Civil Support Team?

The Weapons of Mass Destruction Civil Support Team, also known as a CST, is a full time, federally funded National Guard unit established under Presidential Decision Directive 39. Originally designated “RAID” for Rapid Assessment and Initial Detection, the teams were renamed Civil Support Teams, to emphasize their supporting role to civil authorities. There are a total of 32 active CST’s in the nation, organized under the 10 FEMA regions. The 103rd CST is stationed at Fort Richardson, Alaska.

What is the mission of a CST?

The CST organization is designed to augment local and regional terrorism response capabilities in events known or suspected to involve Weapons of Mass Destruction. WMD events are incidents involving hostile use of chemicals (such as nerve or blister agents, or toxic industrial chemicals – TICs), biological (for example, anthrax or ricin), or radiological source. The CST deploys to an area of operations to:

I would probably have been a bit alarmed if I would have seen this small convoy headed through the middle of my area as well. There is the possibility that the team was responding to an actual threat or incident, which has not been reported, but more than likely they were just training.

What they might be training for is another question. Please know that these units are everywhere and not just in Montana and Alaska. What they were doing when the caller encountered them is anyone’s guess. 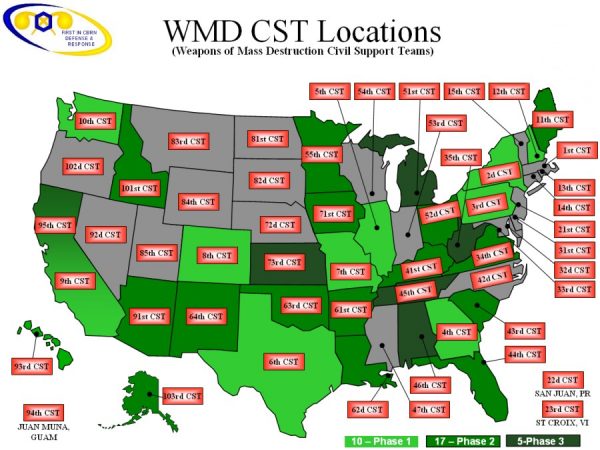