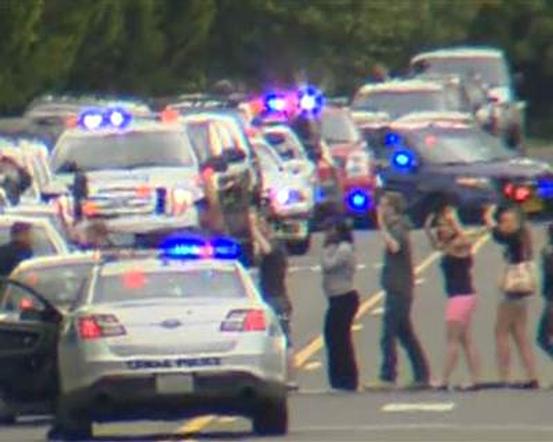 How will the mainstream media spin this, the latest school shooting?

Reynolds High School in Troutdale, Oregon was on lockdown after a gunman allegedly armed with a rifle opened fire in the school. One student and the gunman have been reported to be dead. News photos show terrified students filing out like criminals, at police gunpoint, with their hands in the air.

A gunman and one Reynolds High School student are confirmed dead following a shooting inside the Troutdale school.

“This is a very tragic day, one that I hoped would never ever be part of my experience,” Reynolds School District Superintendent Linda Florence said to parents, students and media.

Around 100 law enforcement officers, tactical teams and medical personnel are in the process of evacuating students and staff.

No one else is known to have been injured in the shooting.

One student told a parent the shooting began in the school’s gymnasium, though police have not been able to confirm specific details.

Another student interviewed at 10:30 a.m. suggested there was more than one shooter inside the school, though police have not confirmed any additional gunman.

The student did say he heard two shots and witnessed a shooter, who he said was male and was not covering his face. The student could not say who the shooter was.

Law enforcement officials confirmed the known shooter was likely armed with a rifle.

Police were first alerted to the shooting just after 8 a.m. (source)

Recent weeks have been host to a rash of shootings across the country, with much blame being cast on “right wing extremists.”  This has caused a frenzy in the gun control crowd, with new legislations being introduced on the coattails of the tragedies. This sudden flurry of shocking violence has led many to question whether or not some or all of these events have been false flag operations, designed to scare the public into supporting the overthrow of the Second Amendment.