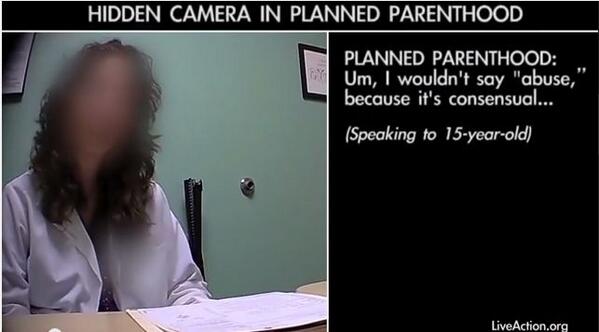 A shocking new undercover video has been released by Live Action to expose the unethical counseling practices of Planned Parenthood’s nurses and counselors. Among other things in the video you will see a pimp get advice concerning abortions for his girls. You will also see a candid conversation with a 13-year-old discussing her sexual relationship with a 31-year-old. Though the counselor does mention that this could be considered rape, she obviously does nothing to try to stop it.

Is this really where we need to be spending our tax dollars? Here is the trailer for what promises to be an extensive unraveling of Planned Parenthood’s criminal agenda:

Lila Rose founded LiveAction.org when she was 15 years old. Live Action is best described as a new media movement with the goal of ending abortion.

Lila went into further detail about what is about to be exposed via a press release which can be found in full at PlannedParenthoodExposed.com.

“What we’re about to release shows a systemic, institutional problem in America’s largest abortion corporation,” Lila Rose, Live Action’s president, stated. “It’s not a matter of ‘don’t judge,’ but rather explicit endorsement of violent and harmful sexual practices to boys and girls as young as fifteen years old.”

Planned Parenthood characterizes itself as a leading sex educator for children.  The organization receives millions of dollars in public money through the TPP (Teen Pregnancy Prevention) program, as well as through PREP (the Personal Responsibility and Education Program).

“Taxpayers, and especially parents, need to know where their money is going,” Rose said.  “This funding is not optional – it’s a compulsory, government-enforced extraction going toward extremely questionable programs and dangerous advice for our nation’s teens.”

Rose expects Live Action’s upcoming investigative releases to serve as “a wake-up call for America’s parents.”  “This is not a partisan issue.  Whether people are liberal or conservative, or even whether they’re pro-life or pro-choice, I think we’re going to see a lot of common ground in the outrage over what we’re about to show people.”

Planned Parenthood has always been a source of controversy. It was founded on principles of Eugenics by Margaret Sanger. Abortion was never about a woman’s right to choose. It was about trying to get rid of societies’ “undesirables.”

Since 1973 America has aborted more than 56 million babies.

Recently Planned Parenthood told clients that there was no need to tell their sex partners if they have AIDS.

Planned Parenthood was also investigated for misuse of taxpayer funds last summer. But like most investigations in this country we see lots of accusations and proof but little or no action.