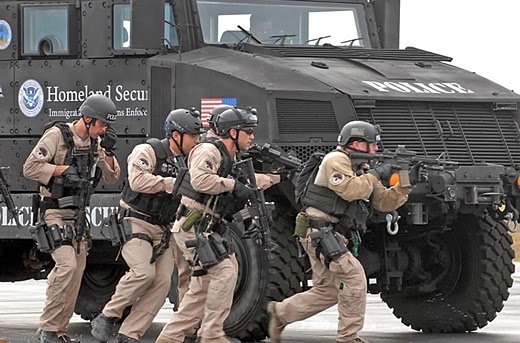 Last week Attorney General Eric Holder launched a domestic terrorism task force. The new executive committee claims it will help keep America safe, but Holder’s own comments suggest what should be obvious, that the initiative is designed to target any American believed to be engaging in “dangerous” and broadly defined extremist activity.

If this were about protecting America from terrorists then how do we explain Eric Holder’s Justice Department and the Obama Administration failing to secure our southern border, where literally hundreds of thousands of unknown, unregistered illegal aliens are pouring into the United States? Isn’t it possible that such a gaping security hole could be taken advantage of by foreign nationals with ties to terror organizations?

The real threat comes from disgruntled Americans right here at home. ”We must also concern ourselves with the continued danger we face from individuals within our own borders who may be motivated by a variety of other causes from anti-government animus to racial prejudice,” noted Holder when outlining the new plan.

Is it a coincidence that Eric Holder launches his new anti-terror agenda and then a week later Department of Homeland Security Weapons of Mass Destruction task force teams start showing up at Liberty Movement hubs like the small town of Kalispell, Montana?

As many who study the “war on terror” will agree, the apparatus implemented by the Federal Government to fight the phony war has been turned around on the American populace.  Almost all large cities, and many smaller ones, have beefed up their armaments to ridiculous levels.  Even the NY Times has noticed this phenomenon.  Even the sparsely populated Flathead Valley, Montana is not immune from DHS intervention.  With Kalispell, Montana being one of the hubs of the Liberty Movement, it comes as no surprise that DHS has set-up shop here.

In the interview below, I speak to an eyewitness who followed four of these vehicles through town.  At one point, they were flanked by air support with a .50 caliber machine-gunner on back.  Please take the time to comment on this article below if you live in the Flathead Valley and you have seen similar vehicles.

Report sourced through Northwest Liberty News via The Daily Sheeple

Either DHS has information that a terrorist attack is imminent in or around rural Kalispell, Montana, or their most recent visit was designed to intimidate the populace, for their own safety of course.

The latter would make the most sense because according to the media and government We’re All Right Wing Extremists:

Folks that actually DO stand up for liberty are being darkly painted with a broad brush, and are being grouped in with crazed shooters and deranged bombers. We can only expect this to get worse, as people in positions of power like Eric Holder demonize our movement. Holder created a “Homegrown Terror Task Force” to combat the likes of the Las Vegas shooting. Literally SIX DAYS BEFORE THE SHOOTING, Holder made his announcement. Fascinating timing, isn’t it? Holder said:

“We face an escalating danger from self-radicalized individuals within our own borders,” Holder said. “As the nature of the threat we face evolves to include the possibility of individual radicalization via the Internet, it is critical that we return our focus to potential extremists here at home.”

Charlie McGrath, an outspoken critic of government policy, echoes these concerns in his most recent Wide Awake News update:

You, I, our friends and neighbors, are going to be labeled the cause of the problems of this country and the world.

You see, if you happen to be someone who is pro-life, pro-Second Amendment, pro-Constitution, pro-sovereign, pro-freedom… you are labeled now a ‘domestic terrorist.’

And in a nation of 310 million people, when we do have the occasional nut that goes out and commits acts of heinous violence, every single time this occurs we see the people that are trying to return to a Constitutional Republic are always the first suspects.

We are on the path to global tyranny… The time is running out when we can have this free discussion, this free exchange of ideas.

You and I being free thinkers is a danger to this police state.

Naturally there will be those who suggest we’re overreacting about the incident in Montana. The Department of Homeland Security is here to protect us and this is yet more radicalized internet conspiracy theory.

Were this true, then DHS would have deployed armored units and air support to the Southern border to stop the pilgrimage, humanitarian crisis and potential terror threat that is happening as illegal immigrants make their way across our totally unsecured border.

Instead, however, they show up in Kalispell, Montana?

This can only make sense in a scenario where Homeland Security, the Justice Department and the Obama Administration are now targeting average Americans and their local communities for intimidation, interrogation and the real possibility of future incarceration.