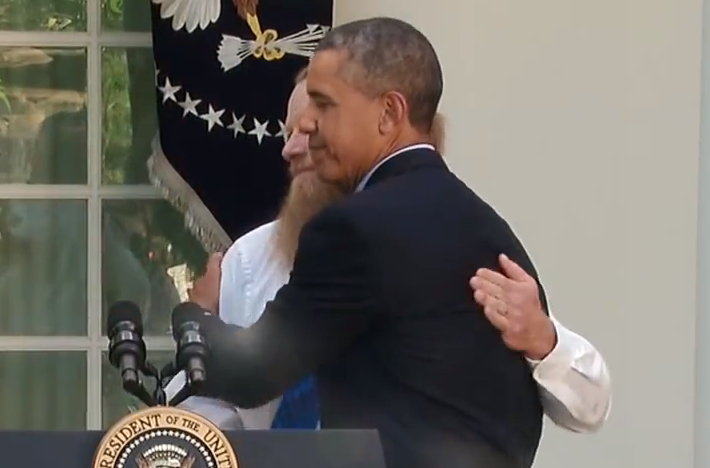 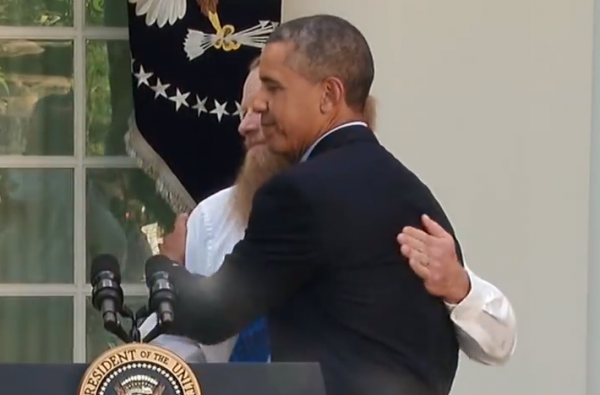 Obama hugged and kissed Bob Bergdahl when he recited the bismallah (a victory chant) in the Rose Garden. When the American people didn’t react with joy to Obama’s treasonous trade, Obama did what he does best. He weaseled out and tried to blame underlings like Hagel.

Apparently that didn’t work either. Hagel said no, it was Obama.

Obama broke the law. He must be prosecuted. Rule of law.

Defense Secretary Chuck Hagel admitted that “the trust has been broken” between the White House and Congress following the Obama administration’s decision to skirt U.S. law and release five top Taliban leaders without first consulting with lawmakers.

Hagel admitted to lawmakers on the House Armed Services Committee Wednesday that the administration unilaterally inked a deal with the Taliban to release five top prisoners from the Guantanamo Bay prison camp without first notifying Congress, as is legally mandated.

The deal was signed “without providing 30 days notice to Congress,” as is required by law, Hagel told lawmakers before attempting to justify the administration’s decision to ignore this law.

The White House’s decision to skirt this law has prompted the House Armed Services Committee to launch a full investigation into the matter, lawmakers revealed on Wednesday.

When asked directly by Rep. Jeff Miller (R., Fla.) if the Obama administration had complied with the law as written, Hagel responded, “No.”

Read the rest at PamelaGeller.com or The Washington Free Beacon.