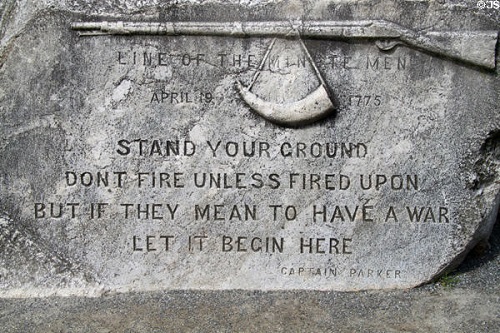 “Stand your ground.  Don’t fire unless fired upon, but if they mean to have a war, let it begin here.” – Militia Captain John Parker at the Battle Of Lexington

Just a couple days ago, two armed assailants, a married couple purported by the mainstream media to be “white supremacists” and “conspiracy theorists,” ambushed two police officers at a CiCi’s Pizza in Las Vegas, killing the officers after screaming, “This is a revolution!” The suspects then reportedly covered one officer’s body with a Gadsden Don’t Tread On Me flag and then fled to a Walmart, where they killed another man with a CCW who attempted to reason with them, then committed suicide. Yes, it reads like a Southern Poverty Law Center fantasy story; and in many ways, it is.

As we all predicted the MSM has followed the pattern they have always followed, which is to equate the actions of one or two psychotics with the beliefs and principles of the liberty movement in general.

I remember when Jared Loughner fired into a crowd of people near Tucson, Ariz., killing numerous Federal and State employees; the immediate response by the media was to attempt to tie him to the liberty movement. In the end, he turned out to be a raving leftist. I remember the Boston Marathon bombing and the automatic reflex by the media to accuse “right-wing extremists” of the crime. So far, we have seen NO hard evidence to implicate anyone specific in that atrocity, including the Tsarnaev brothers. Of all the violent crimes dumped in the lap of the liberty movement over the years, how many have actually been committed or endorsed by the liberty movement? I can’t think of any.

This has not prevented the establishment media from doing everything in their power to associate criminal action with political ideals.  Efforts to sully the success of the Bundy Ranch stand-off were swift, with Jared and Amanda Miller’s visit to Bunkerville splashed across the headlines.  Luckily, the sound judgement of organizations like Oath Keepers led founder Stewart Rhodes to personally ask the two future shooters to leave the property.  I can only imagine the weight of the slander if they had been allowed to stay.

When an activist movement holds the moral high ground against a repressive establishment power structure, the establishment’s primary recourse is to target the character of its principles. The secondary recourse is direct confrontation. If a dissenting organization is not mindlessly vicious in its methods, then simply make it APPEAR vicious. If it is not hateful in its rhetoric, then artificially tie it to people who are. And if a government really needs to kick-start a crackdown, it can engineer its own man-made calamities and blame the groups that most threaten its authority.

This was achieved to great effect in Europe from the 1950s until the 1990s by the CIA working in tandem with multiple European governments under a covert project called Operation Gladio.

Gladio was essentially a secret army of operatives and stooges, handlers and puppets, used to create false-flag terrorist shootings and bombings across Europe that were blamed on “left-wing extremists.” In reality, NATO alphabet agencies were behind the entire facade. The goal was to terrorize the citizenry through a nonstop campaign of indiscriminate death, blamed on a convenient scapegoat, so that individuals would hand over more freedom and more power to the central governments. The point is, whether real or staged, I believe such events are going to escalate within the U.S. today on an incredible scale and that, regardless of evidence, they will be blamed on “right-wing extremists.” In case you were wondering, that label will be foisted on most if not all of us.

That said, I think an important truth needs to be stated here: Whether the beliefs of the attackers in Las Vegas were actually liberty movement-oriented or not is ultimately irrelevant. To shoot random police and civilians and then commit suicide is an act of pure insanity, a product of mental instability that has nothing to do with political philosophy, and mental instability trumps belief and association anytime.  Mentally unstable people exist within ALL belief systems and political groups.

At bottom, I do not care what their beliefs were. Their actions do not represent the values I hold dear, nor do I think they represent the values most of us hold dear. The shooting is a tragedy, but in the grand scheme of things, it means nothing, and I have little doubt it will be forgotten within weeks.

I relate the story because I do, in fact, agree with one thing: that a “revolution,” a second American Revolution, is inevitable. But I think I speak for the vast majority of the movement when I say that this revolution will not begin with the deaths of innocents or random government employees on our hands, and it certainly won’t begin at the doorstep of a CiCi’s Pizza.

The Bundy ranch incident, which occurred only a short drive from Las Vegas, has been a revelation for many people. Mistakes were made, provocateurs reared their ugly heads, and lessons were learned. But overall, America has been fundamentally changed, even if the average person does not realize it yet. The information war came within a razor’s edge of evolving into a shooting war, with the establishment in retreat, licking its wounds while planning how it can gain back its composure and carefully crafted image of “invincibility”.

What frightens the establishment most, I think, is that the American people have become active participants in their own national environment once again. At Bundy ranch, they stopped asking for mercy, they stopped begging the system to police itself, they stopped waiting for the rigged elections, and they stopped relying on useless legal avenues to effect change. Rather, they took matters into their own hands and changed the situation on the ground on their own. For oligarchy, this development is unacceptable, because one success could lead to many.

Already, we are beginning to hear whispers of possible Federal retribution against those who participated in the confrontation.

This has been cemented within the efforts of a new task force against “domestic terrorism” organized by none other than Eric “Fast and Furious” Holder.

After the recent exposure of Barack Obama’s Department of Defense Directive 3025.18, we now know that since at least 2010, the White House has been setting the stage for the use of military force against “domestic threats.” That is to say, for at least the past four years our government has been quietly maneuvering toward martial law. It’s been happening for much longer if you count George W. Bush’s Presidential Decision Directive 51, which has yet to be fully declassified.

The exposure of Directive 3025.18 also came with information that the Obama Administration considered using it as a way to activate military forces and drones against the Bundy ranch. The burning question is, of course, why didn’t it? The Federal government is not known for its diplomacy in the face of a defiant citizenry. Waco and Ruby Ridge made that clear. I believe that it was not necessarily the people on the ground at Bunkerville, Nev., that they were most worried about. The terrain is admittedly a terrible place to mount a defense against a mechanized horde of jackboots.

No, what the White House feared was a larger response to such an attack. It feared the millions of patriots who would swarm down from all sides if it committed to a Ruby Ridge-style siege. It feared the reality that this time, Americans were not going to sit back and watch another family be slaughtered on national television.  It feared the fact that it didn’t have the moral high ground in the public eye and that a kinetic failure on its part would be met with cheers, rather than tears, from much of the populace.

So where does this leave us? With the Bundy success besmirching the Feds, the next strategic program will likely include an unprecedented effort to demonize the liberty movement perhaps to the point of a Gladio-type false-flag campaign, leading to the eventual detention of activists as domestic security threats. It’s not going to end with shootings in pizzerias and slobbering hit pieces from the SPLC.  Expect a landslide of violent acts.  Expect another engineered large-scale calamity like the Oklahoma City Bombing.  Expect dozens of Timothy McVeighs to be trotted out in the media. Expect the Liberty Movement’s name to be buried in an avalanche of bullshit. Mark my words; it’s going to get much worse from here on.

And this is where I will add my warning.

Before the Bundy ranch became a possible battleground, I stated in my article “Real Americans Are Ready To Snap” that the liberty movement was going to draw a line in the sand over Bureau of Land Management abuses in Bunkerville, and I was right.

It seems to me that time is growing short. As tyrants become more bold, so too must the citizenry; otherwise, we shrivel up and die.  We cannot allow the movement’s momentum to be shattered and driven underground as the militia movement was after Oklahoma City.  We know what is coming, and we must drive forward.  We know we will be labeled as terrorists and villains, and ultimately, we must realize that such eventualities do not matter.  The Liberty Movement is not going away.  In fact, future clashes with our criminal government are only going to become more frequent.

The next family threatened, the next activist individual or group arrested or black-bagged without legitimate cause, the next major false flag, the next use of military forces as civil law enforcement, the next unConstitutional misstep, and I have no doubt whatsoever in my mind that a revolt will erupt. It’s not about making grand predictions; it’s about examining the logical odds, and the odds are high. The knowledge that the establishment is considering using the full force of its military apparatus against the people has not dissuaded anyone. Bundy ranch was a very near miss. I do not expect a peaceful resolution the next time around. I also do not expect the government as it exists now to stop clamoring for more control or less corruption. If recent events have proven anything, they have proven that a second American Revolution is inevitable; and all we can do is ready ourselves.

Alt-Market is an organization designed to help you find like-minded activists and preppers in your local area so that you can network and construct communities for mutual aid and defense.  Join Alt-Market.com today and learn what it means to step away from the system and build something better.