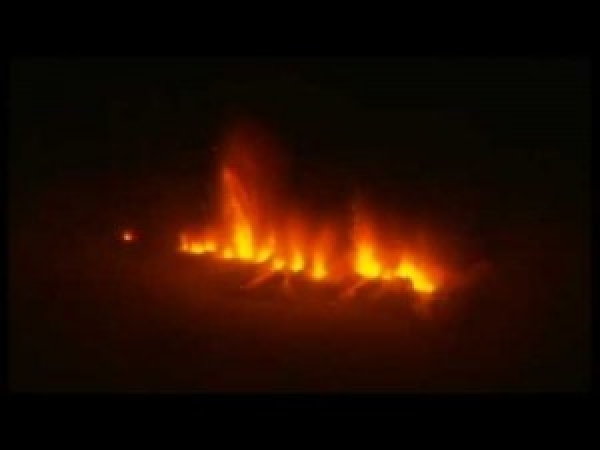 Up to June 6th the Indian mainland had seen no active vulcanism for 60 million years. On June 6th a fissure opened in the ground near the village of Gadiya, in the Kangra District of Himachal Pradesh State, India. Flames, gases and magma are spewing out of a four yard wide hole in the ground and the Indian geological survey have confirmed it is magmatic, it’s producing lava that is coming up from deep underground and has broken through the earths crust.

It’s the first volcanic eruption ever witnessed in India, because man was not around when the last one happened 65 million years ago at the end of the Cretaceous period.

The Deccan Traps marked the last, crust shattering effusion of magma in India. They are one of the largest volcanic provinces in the world. It consists of more than 6,500 feet (>2,000 m) of flat-lying basalt lava flows and covers an area of nearly 200,000 square miles (500,000 square km) (roughly the size of the states of Washington and Oregon combined) in west-central India. Estimates of the original area covered by the lava flows are as high as 600,000 square miles (1.5 million square km). The volume of basalt is estimated to be 12,275 cubic miles (512,000 cubic km)(the 1980eruption of Mount St. Helens produced 1 cubic km of volcanic material). The Deccan Traps are flood basalts similar to the Columbia River basalts of the northwestern United States. (source)

The Deccan Traps eruption put so much gas into the atmosphere it is thought to have played a part in mass extinctions.

Chief parliamentary secretary Jagjivan Pal in whose Sulah assembly constituency the area falls visited the spot on Tuesday. He said the flames and the hot liquid emanating from the hill had created panic.

“Underground temperature in the area has increased manifold and people say that a steel electricity pole had become red hot a couple of days back,” he added. Pal said a sulphur-like material and black stone is flowing out from the perimeter of the hill.(source)

The effusion continues to flow and local villagers are concerned that they may lose their homes if it continues. The nearest village is only 90 yards from the site.

The Deccan Traps eruption shaped India and had a profound effect on the planet as a whole, let’s hope this isn’t the start of something much, much bigger.