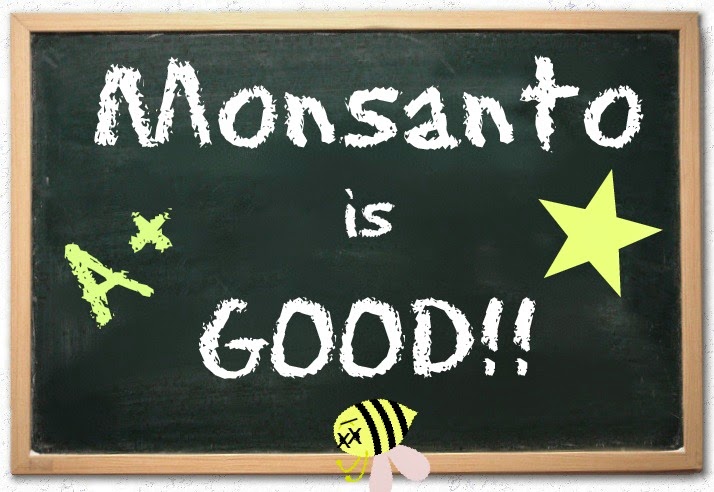 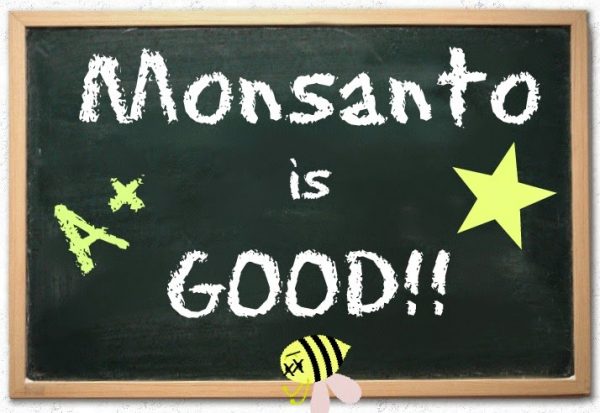 I’m retelling this story not to cause sheer outrage or bring down shame and fire on one school in one instance, but to let you know definitively that Monsanto representatives could visit a school near you to teach a class.And you need to know what they are saying… It happened in at least one instance and with a fairly interesting method of leaving lasting impressions on 12-year-old 7th graders.I know Steve from Facebook and he posted videos of his stepson after coming home from school one day in late May to tell the family that four Monsanto representatives were allowed to take over P.E. Gym class and gave a presentation to students in the Health classroom.Monsanto reps gave each student a deck of playing cards as a gift. Their logo was on the front and general factoids about the world’s food supply were on the back of each card. For instance, “America produces 30% of the world’s soybean crops.” Nothing was mentioned about genetic modification or the company’s other practices. They took the “leader in agriculture” approach.Next, students were subjected to 47 minutes of time with Monsanto, including a PowerPoint presentation. Steve’s son recounts that Monsanto told them “all the good things” that Monsanto does. They emphasized that serious food issues were due to, not companies like Monsanto, but problems like food borne illnesses, and that people leave their food out too long and don’t refrigerate meats. “It’s the people’s fault” was the take home message.

Did you know that high fructose corn syrup isn’t bad for you at all? That’s what Monsanto taught the students in the Health room during gym class. It’s not the cause of obesity – it’s because people don’t get around, they said.Steve asked:Did they tell you anything about the chemicals or anything like that that they put into their food?Son: Nope.Did they tell you anything about how they do business?Nope.So they pretty much just sat there and blamed everybody else for everything that’s wrong with food…Yes.Did they mention anything to you about GMOs?No.About labeling genetically modified food that they produce?No.So they pretty much just came in and told you how awesome they were?Yep.Yep, indeed. Steve’s son remembered that the reps played videos showing the class that they create jobs for people and help people out…Then Steve’s son describes hearing a cautionary tale from the reps about a farmer who tried to clean off their seeds to put them (or the substance) away and got in trouble for it. Let’s see, that could either be a description of a Monsanto-contracted farmer saving seeds from harvest (big no-no) or a farmer who took Monsanto seeds to grow them and have the ability to spray pesticides without killing the plants. If the latter is the correct scenario, then that’s actually a description of conventional crop contamination that happens when Monsanto seeds blow into another field. In either case, Monsanto will aggressively sue. Was this the agricultural version of a “scared straight” seminar for kids? Geez, useful for kids to know for when they’re out seed collecting.Outside speakers, even corporate ones are allowed to come into schools to speak to students with approval from Principals and school boards (if necessary). Should they really be allowed to take over a class? And wouldn’t you at least like to know when that is going to happen, what the topic matter is and have the ability to opt out?The intro to my seventh grade school handbook/homework planner alerted us expressly that we were Human Resources for the state and that during school hours we belonged to the state and school. We would be subject to school property, rules and faculty and staff. Any parent reading that intro would get the picture.That was over 15 years ago…But, hey, if we are property of the school/state, why should we be then subject to corporate bylines? Why should government money, resources and time be spent this way?All facetiousness aside, I will let Steve take over and tell you about his appointment with the Principal in his own words:

I wanted to make the point that as much as I despise Monsanto, this is about more than just them. This is about our children having the freedom to go get an education without entities with ulterior motives forcing them to sit and listen when it has nothing to do with their education.I live near St Louis, where Monsanto is based, but I want all to know that Budweiser is based here too and I would be just as angry if it was mandatory for my children to listen to a presentation from them about their company. The point is that public school is there for education, not conditioning, and whether it is Monsanto, aspects of the military, or anyone else, no corporate or non-education related entity should be giving presentations about themselves that are mandatory for my child or yours to attend.

UPDATE on my conversation with my 12 year old’s school principal concerning Monsanto giving a presentation in his school on Tuesday…..So I spoke with Dr. Wood (principal) today concerning this topic. Though I know a lot of us are angry about this, I have to say he was very understanding and reasonable about my frustration. I came to find out that even though he was generally aware of the visit by Monsanto ahead of time, he was not very informed on what they actually said to the children, and this was true enough that he needed to have a discussion with the actual teacher who was in the class and get back to me withmore details. Speaking with him, I got the impression that it was actually the teacher herself who set up this visit and it was not a school-wide event but instead just restricted to just this particular class (my son’s unfortunately).Dr. Wood assured me that he understood my anger/frustration about Monsanto’s visit and that he agreed that they were far too vilified and controversial a company to ever be in front of school children without any kind of parental consent first. He was also apologetic and understanding to the concept that NO corporate entity should ever be making presentations to 12 year olds without parental consent first and assured me that my son would never be subjected to that kind of presentation again without me first giving my consent.Now, with all that being said, he could not assure me that companies wouldn’t be allowed to do something similar to Monsanto’s presentation in the future because there is no specific rule against it, nor is there a rule that prohibits teachers themselves from inviting outside entities into a classroom if they feel what the entity will say is somewhat subject related to their class. Sadly, we both agreed that rules like this haven’t been put into place because most parents rarely complain when there is such an event and we both found that to be both disappointing and sad. He was very adamant, in a reasonable way, that in his 27 years of school administrative work, he has seen parental involvement become less and less prevalent every year that has gone by. Again, we were both saddened by this.Going forward, Dr. Wood will likely get back to me to finish our conversation after he discusses this with Mrs. Meyer, who was the teacher in the class that had Monsanto in, and after he does that I will give another update but in the end, what I found out today is that while the school was willing to commit to not putting my son in such a presentation without my consent, it didn’t seem like the visit itself is something that is going to stop anytime soon unless us parents make it. This whole experience has shown me that, as a parent, each of us needs to be vigilant RIGHT NOW if we want to put a stop to outside influences creeping into our children’s lives.The small effort I put in these last few days will protect my child in the future from being exposed to such things without my prior knowledge but it WON’T protect yours, so I hope everyone learns something from this as I have. We as parents have to communicate with our kids on a daily basis to ensure we are protecting their innocence because the administrative bodies that exist in schools are really only go to follow written law so if law doesn’t prevent brainwashing and indoctrination, they are not going to prevent it either unless you make them. Thanks for caring about this, to both my Scream The News friends and also my personal ones. I was overwhelmed by the support I received before this meeting.—-

Has a corporation ever sent representatives to teach your child in your school? Please share your experience below.Heather Callaghan is a natural health blogger and food freedom activist. You can see her work at NaturalBlaze.com and ActivistPost.com. Like at Facebook.