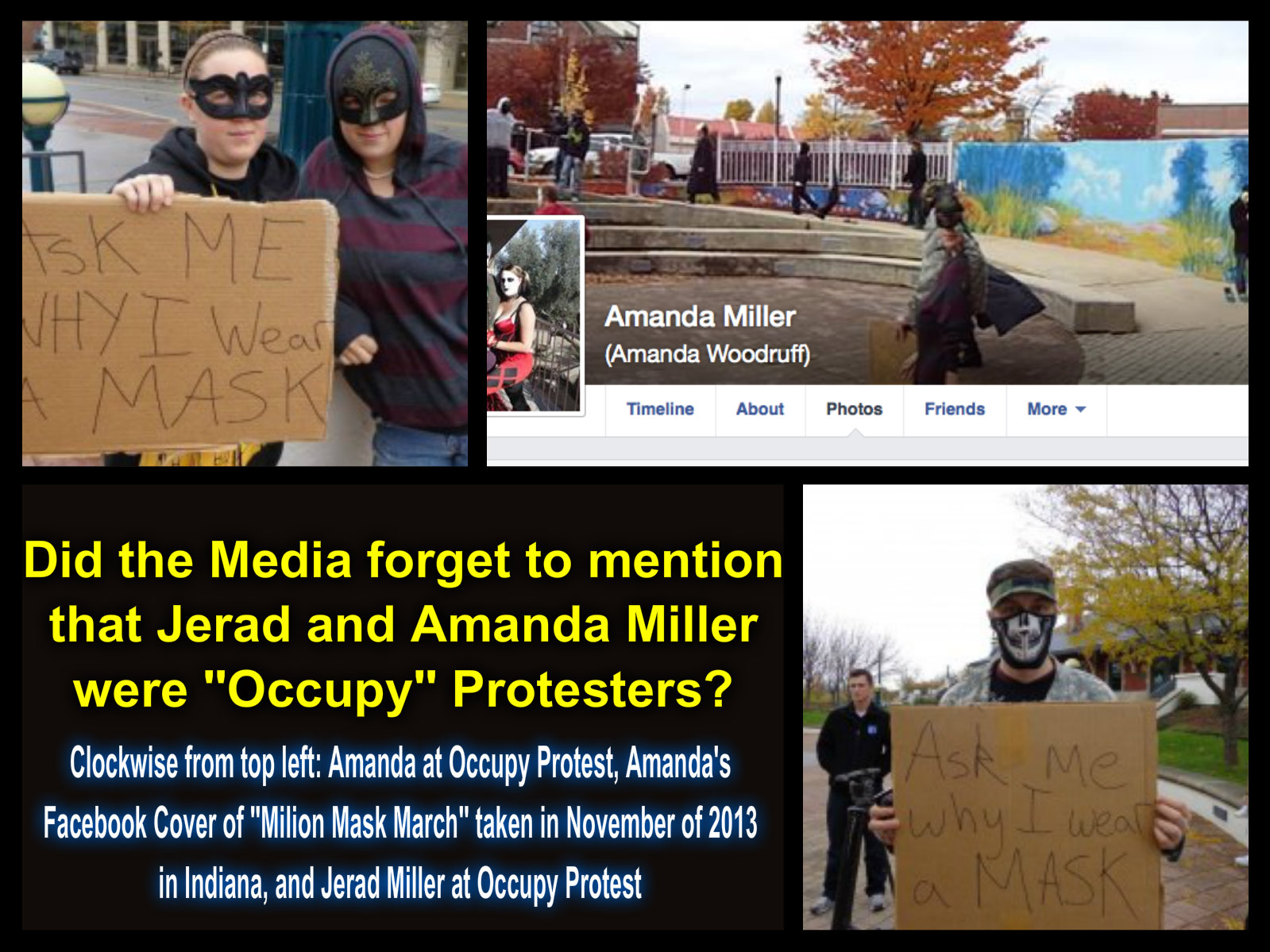 Sometimes I wonder how we can elect any conservatives at all in this country. According to past studies, 89% of journalists in America tend to vote democrat. Whether they consider themselves liberals, progressives, moderates, conservatives, independents or anything else under the sun, it does not matter. Look at what people do and not what they say.

We have too often seen what happens to good reporters when they challenge the liberal media establishment. Remember the recent case of Sharyl Attkisson?

The latest evidence of a liberal media agenda comes from the Las Vegas shooters, Amanda and Jerad Miller. The picture collage at the top of this post paints a much different narrative than we have been fed.

Why? Because if and when that fateful day of revolution descends upon this nation, the left wants the police in their corner. It is just another strategy to fortify the budding police state in America. It is a type of psychological warfare, you might say. Make law enforcement officials hate right-wingers and they will remain loyal to a destructive leftist agenda.

Maybe most importantly they want the common people of the left and right to continue to hate each other. I say common people because there are two lefts and two rights. There are the destructive leaders and there are the unknowing people and it is like that on both sides of the aisle. We are all “useful idiots” in one way or another. They want no common ground to be had. The truth is, that despite the media spin, many people in this country can relate to both Occupy Protesters and Bundy Ranch Supporters. But the powers that be do not want you to wake up and realize that. They want you to hate each other.

Their power can only be kept by Americans remaining divided.

With all of that said, it will come as no surprise to our readers that the Millers were involved in the “Occupy Movement.” Again, the liberty movement is massive but the Occupy Protests tend to be attributed to the left. Bundy Ranch tends to be associated with the right. They are both cases of civil disobedience but obviously the media wants to paint a picture of the Millers as being people who voted for Romney rather than Obama. This is how the media constantly pushes the agenda of the left. Nearly every news publication in America printed something about the associations of the Millers, but very few printed this:

After seeing this Photo the LVPD still didn’t think the shooters involvement with Occupy was important enough to mention in the press conference where they promptly began a media storm about the Miller’s involvement at Bundy Ranch.

According to CBS Chicago:

While living in Lafayette, Jerad and his wife Amanda took part in last November’s “Million Mask March” – a gathering of protesters from the Occupy movement, anarchists, and hacktivists.

Nick Wertz, one of the organizers of the Lafayette march, said it attracted many people upset over a lot of issues.
“Everyone there just seem kind of like normal people. At least they were going to stick up with what they thought was right,” he said.

Wertz said he didn’t really know the Millers, but weeks after the march, Amanda Miller contacted him. “She was moving to Vegas for whatever reason and they had a dog they couldn’t take with – and I was like, ‘If I can help,’” Wertz said.

But that was the end of it, he said.

On Sunday, his Facebook page lit up, accusing him of brainwashing the Millers.

“I didn’t even know anything had happened until I logged on Facebook and was being blamed for being associated with it,” Wertz said. “I was in no way, shape or form aware of these actions. I actually spent my weekend with my girlfriend at a water park.”

In a previous article I highlighted how Ammon Bundy verified that the Millers were asked to leave the Bundy Ranch. They did not fit in and were considered to be loose cannons. Very few media outlets reported this fact either.

America this is what you are up against.

I hear some people complain, on a daily basis, about me rehashing the same old stories. That must be done because some people are not awake yet and your “old news” may be someone else’s “epiphany moment.” Sometimes I am late to get new information out and I apologize for that, but I am not a professional journalist. I am just a blogger who loves my country and I am trying to make a small difference, but my family still comes first.

The reason I put this stuff out there is because I am hoping that others will do their best to educate America as well.

Our best hope is that the Citizen Media some day overtakes the Mainstream Media. Until that happens the truth will not come out to the masses. For every report of the truth, like this one, there are dozens of politically slanted articles hosted on big websites that would blow my little blog away.

Yet I continue to fight to expose the truth and I am asking you to do the same.

Don’t ever give up.

The truth must come out.

In the end I don’t know who the Millers voted for and I don’t need to. This is not a 2nd Amendment issue or a “right versus left” issue.

This is simply a case of two bad people who did a terrible thing by killing three innocent Americans.

That does not reflect on me or you.

It only reflects upon Jerad and Amanda Miller.