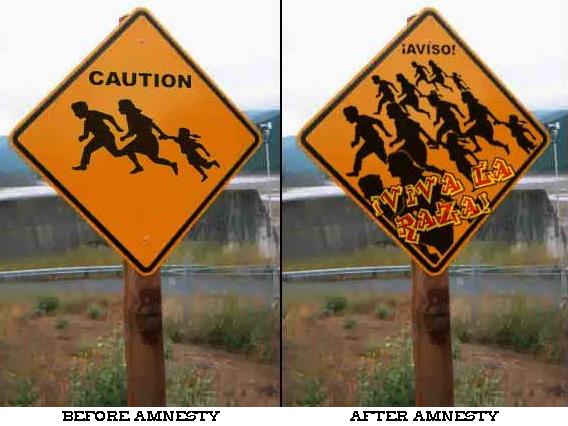 I never thought I would say this, but the Democrats have sunk to a new low. I liked them better when they were getting whole cemeteries to vote Democrat. The Democrats know that they can’t win using ethical methods, like standing on their accomplishments, so they’re using illegal aliens and their children to force immigration down the throats of law abiding American citizens. I mean, who doesn’t have pity for children? You’d have to be a real monster to want to send children back to their countries of origin without their parents accompanying them right?

Well, the next logical step, in the minds of Democrats anyway, is to bring the parents of these child immigrants here to be with them. After all, that’s what being “liberal” is all about right, “compassion” for families? What kind of monster would want these children to be separated from their loving parents?

Of course, one need not mention that these so-called “loving parents” sent their little children on a long bus trip to a strange country un-accompanied without any regard for their safety in the first place. They must be super duper parents to do that, right? What wonderful American citizens they will make when they get here to claim their little ones. All they have to do, because they won’t have a job waiting for them, is to “vote” for the ultra-compassionate, political party that reunited them with their babies.

The number of children crossing the Mexican border illegally without (although sometimes with) parents has increased dramatically over the last several years. Numbers ranged from 6,000 and 7,500 per year between fiscal years 2008 and 2011, but skyrocketed to 13,625 in fiscal year 2012. Last fiscal year the number almost doubled again to 24,668. This year the total is expected to exceed 60,000 and, next year, as many as 130,000.

How convenient for the Democrats.

In an article by Judicial Watch they write :

U.S. Border Patrol agents are being recruited to serve as babysitters for the influx of illegal immigrant minors that have entered the country recently through the Rio Grande region of Texas, according to an internal document obtained by Judicial Watch.

This is the front-line federal agency responsible for preventing terrorists and weapons of mass destruction from entering the United States. With a force of about 21,000 agents, the Border Patrol is also charged with detecting and preventing the illegal entry of aliens into the U.S., while facilitating the flow of legal immigration. The agency patrols nearly 6,000 miles of Mexican and Canadian international land borders and more than 2,000 miles of coastal waters surrounding Florida and Puerto Rico.

Babysitting kids has never been one of its duties, but the country is in a crisis because it’s been bombarded with thousands of illegal immigrant youths from Central America. Earlier this week Judicial Watch reported that the barrage of minors entering through Mexico has created an out-of-control disaster with jam-packed holding centers, rampant diseases and sexually active teenagers at a Nogales facility. An inside Homeland Security source offered JW alarming details of the crisis, which was sparked with rumors of amnesty, according to a veteran Border Patrol agent in Tucson.

Now the administration is desperately searching for babysitters and has distributed a memo, obtained exclusively by JW, recruiting agents with “child care or juvenile teaching and/or counseling” experience to work at the various shelters that are housing the illegal alien minors. The government is so overwhelmed that agents on this “temporary assignment” in makeshift shelters—some at military bases—will work a mandatory sixth day of overtime, according to the memo. “They will have BP agents as babysitters,” said one veteran federal agent.

The special detail calls for 140 agents to staff and operate a Nogales “placement center” at full capacity, 24 hours a day, 7 days a week for the “foreseeable future,” the memo says. The facility will be responsible for the temporary housing, care, health, safety and processing of Unaccompanied Alien Children (UAC). A temporary duty funding will pay for the special operation and agents will be “responsible for feeding, monitoring, interacting and providing security” for the illegal alien minors until they are placed elsewhere.

Here’s how the “situation” is described in the internal DHS document: “Rio Grande Valley Border Patrol Sector (RGV) is experiencing a major influx of Other Than Mexican (OTM) Unaccompanied Alien Children (UAC) which is straining RGV’s detention temporary housing, care, health, safety and processing capabilities. As a result, Office of Border Patrol has requested Tucson Sector’s support. In response, TCA is mobilizing the Nogales Placement Center (NPC) in order to support RGV and provide for the temporary housing, health, safety and processing of UACs.”

This means that our southern border is virtually UN-guarded because all available agents are now playing “paddy-cake” with these children when they should be watching the border. Why not have the BLM watch these children or the EPA?

It’s one thing to trade 5 terrorists for one traitor, but this is a new low, even for Obama; to leave our border completely open to a full scale invasion!

Of course, the Democrats have seized upon the opportunity and are following Obama’s lead. If they can’t guilt the heck out of Republicans, saying that taking care of these children is “the humain thing to do,” they have also resorted to threats to get some kind of comprehensive immigration reform passed.

New York Democrat Senator Charles Schumer has sent a warning to republicans by saying, “If you don’t want to be a minority party for 2016, then you’d better pass immigration reform.”  Democrats are also threatening, that if the House does not pass a comprehensive immigration reform bill this year, the issue will be dead in 2015 and 2016, sinking the GOP brand among Hispanics ahead of the 2016 election.

Don’t worry conservatives, because there’s plenty of RINO’s who feel the exact same way. Sen. Marco Rubio (R-FL), a central member of the coalition that passed a comprehensive reform bill in the Senate last year, said he would craft a better legislative approach if Republicans control the upper chamber in 2015. That would give his party (Which party is that? Because it’s sure as hell not the Tea Party!) a chance to pass immigration legislation before the presidential election, when Hispanic voters will be crucial to winning the White House.

Thanks Marco, I knew that we could count on you! It’s funny, but Hispanics are only 10 percent of the electorate. I have mentioned in previous articles, that any kind of amnesty plan would change the demographics of this country forever, because the real numbers of illegal aliens in America are far more that the Obama administration is telling us.

It’s no secret that Barack Obama has told immigration officers to “stand down.” It’s also no secret that he just let 68,000 illegal alien criminals out of jail back onto our streets.  You see where this is going don’t you? They’re flooding the country with “immigrants” to bolster the DNC voter base.

The President and the rest of the Democrats know that their record of economic recovery sucks! They also know that Obamacare was a complete and utter failure, all because of that little “misunderstanding” about “If you like your doctor and healthcare plan you can keep it.” And let’s not forget about Obama’s war on coal to stop global warming.

No, I’m afraid that Democrats know that they have to pull a rabbit out of the hat in order to keep control of the Senate and win back the House in November. So what better way than to let it be known that they’re pushing “immigration reform” right before the mid-terms to get the Hispanic voter base fired-up?

Forget about what will happen economically when you add thirty to fifty million new citizens to an already dismal economic recovery. Heck, that’s why we have food stamps, section 8 housing and welfare for in the first place – right?  Oops…I almost forgot about all those “free” school lunches that the children of these new American “citizens” will need when they start school. So what, if states like mine (Washington) are already putting-out over three billion dollars a year for illegal aliens and their kids, they’ll just find some new tax to levy on the rest of us to pay for it. You wouldn’t mind, would you?

After all, it’s for the children. When those little child immigrants graduate high school, they’ll need help being able to afford tuition for college, so that they can have a piece of “The American Dream.” You wouldn’t deny them that, would you? But your kids will get stuck with skyrocketing tuition costs to pick-up the slack for the poor unfortunate little waifs and they will also have to compete against them in the job market. I can see it now, “Excuse me young man, do you speak Spanish? Oh you don’t, well I’m sorry but we require our prospective applicant to be bi-lingual for this position….sorry.”

Just when you think Democrats can’t possibly be any sleazier, under handed, or corrupt; to get votes…they never let you down, do they?