So I was reading Heather Callaghan’s article, “Monsanto Teaching a Health Class In a School Near You?” published earlier today at Activist Post, which begins, “I’m retelling this story not to cause sheer outrage or bring down shame and fire on one school in one instance, but to let you know definitively that Monsanto representatives could visit a school near you to teach a class…”Scrolling down to see what people thought of this glorious new development in genetically modified propaganda, I noticed a very angry man in the comments section going by the name “Michael Stephens” thought long and hard about Callaghan’s piece and had quite a lot to say: 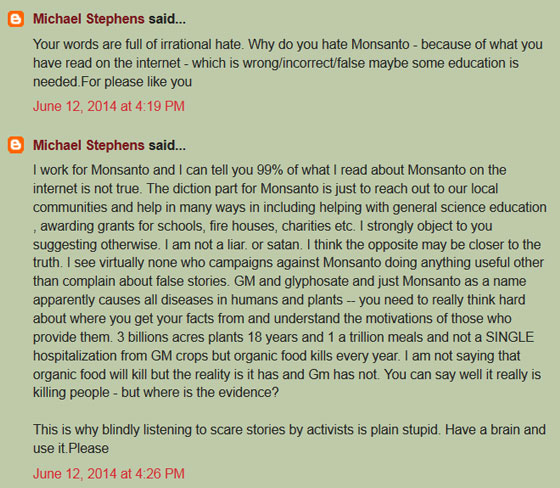 His first comment, telling the writer her words are “full of irrational hate” was apparently not enough, because he quickly came back for a second, much longer comment which began with, “I work for Monsanto and I can tell you 99% of what I read about Monsanto on the internet is not true.”

Stephens ends his long tirade with, “3 billions acres plants 18 years and 1 a trillion meals and not a SINGLE hospitalization from GM crops but organic food kills every year. I am not saying that organic food will kill but the reality is it has and Gm has not. You can say well it really is killing people – but where is the evidence?” [emphasis added](Note: This writer has read plenty of articles by Callaghan and on Activist Post regarding Monsanto and GM crops, backed up with numerous references, but that isn’t even the point here.)Organic kills…really? Then what did humans eat for hundreds of years before Monsanto ever existed?Why would a self-professed employee of Monsanto actively spend his time trolling anti-GMO articles, then try to randomly claim organic food kills people (without the very evidence to back up his claim that he is saying the writer lacks)?After all, Monsanto has fought labeling GM food in every state that’s tried to label it. Why is that if, according to one of the company’s own employees, GM crops are feeding the world such safe food that has never put a single person in the hospital?A little digging, and it turns out Mr. Michael/Mike Stephens, or someone going by those names anyway, is making the rounds in numerous articles on GM crops and Monsanto and has for years now (but much more angrily lately), dutifully sticking up for what he says is his company and their products (and even The Bill and Melinda Gates Foundation).Stephens makes a lot of claims, including that Monsanto’s data collection is totally sound, GM crops improve yields, stories of Indian farmers who committed suicide due to GM crops are false, Monsanto is “now biology company not a chemical company,” glyphosate doesn’t cause any diseases, doesn’t kill bees, and is “one of the safest herbicides,” organic farmers don’t get sued by Monsanto, Russia is “really a gas station with a president,” “organic industrialists” are “funding anti-GMO campaigns to bad mouth GM food,” and “organic growers want to distract people from the real issue — organic food killing people.”That last one he mentions time and again.Here’s a quick smattering of a few of the more recent comments, screen capped.From the May 25, 2014 article, “World protests Monsanto grip on food supply chain” at Russia Today: 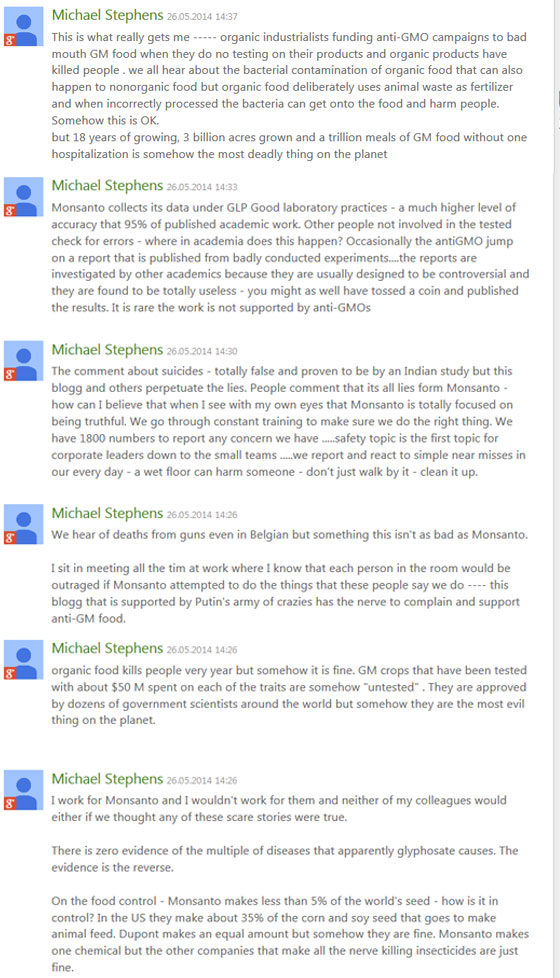 From the February 24, 2014 article “Is The Royal Society Monsanto?” at CarbonCounter.Wordpress.com in regard to Guardian Environment Editor John Vidal’s piece “GM crops: European scientists descend on Africa to promote biotech”: 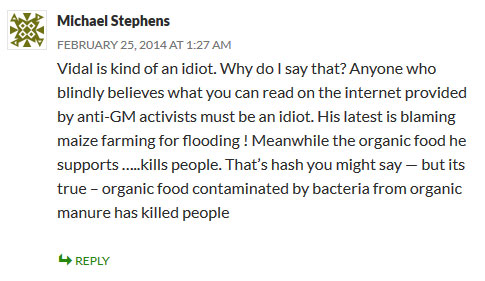 From the June 2, 2014 article “After the March Against Monsanto, Momentum Favors the People” from Two Cent Report:

Real professional there, Mr. Scientist. Does this guy even have half a clue who he claims to work for?Stephens has been around for awhile now — from the 2010 press release “Gates Foundation Invests in Monsanto” on Community Alliance for Global Justice: 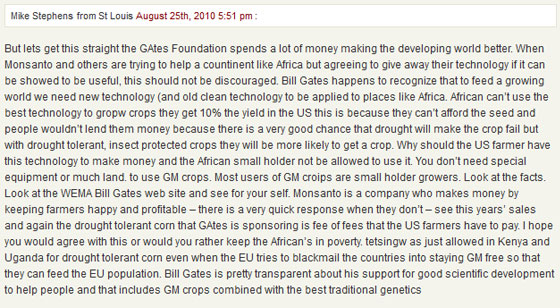 (Gates, who “spends a lot of money making the developing world better” according to Stephens, reportedly owns something like 500,000 shares of Monsanto Stock worth approximately 23 million USD, just by the way.)That last comment is particularly telling, however. Monsanto’s world headquarters is located in St. Louis, where this Mike Stephens’ is listed from. He also specifically mentions Gates’ WEMA project.It’s a lot like this Mike Stephens below who has a B.S. in Microbiology and a Ph.D. in Plant Pathology, who worked on Bill Gates’ WEMA project, and who is currently listed as the Commercial Project Support Lead at Monsanto Headquarters in St. Louis on LinkedIn.

Is it the same guy?So if everything written in every article he’s been on (the list of them goes on and on and on) is completely untrue regarding Monsanto and it’s genetically modified products and chemicals, why even bother arguing? (Besides the fact that for someone with a Ph.D supposedly educated at Harvard, he looks totally unprofessional and ridiculous online — a great company spokesman, no?)Why spend what appears to be countless hours in article after article after article attacking organic food, organic farmers and anti-GMO activists?Also, if this guy is the same one on LinkedIn who is in control of teams of scientists charged with creating Monsanto’s GM food and testing and vouching for its safety with this attitude, why would anyone want to buy it anyway, even if it was the best stuff on the face of the planet?He sounds like an elementary schoolyard bully, at best.The one thing Stephens never seems to discuss, by the way, is this: if his company’s products are so dang wonderful for everyone everywhere — why, oh why won’t the company allow it’s glorious gift to mankind to be labeled in the U.S.? Why have his bosses spent millions to fight the public’s right to know if they are eating Monsanto products? Why is Monsanto, and its lobbying arm the Grocery Manufacturer’s Association, suing Vermont to keep the state from passing a GMO labeling law?People have the right to know what they are eating. Period.People have the right to know how their food was made, so they can make a choice as to whether or not they agree with that process before they consume said food. Period.They have this right no matter what food it is or who says it’s good for them or not. Period.Monsanto is a business. Monsanto isn’t anyone’s daddy. Grown-ups have the right to make informed decisions at grocery stores.Period. Period. PERIOD!Melissa Melton is a writer, researcher, and analyst for The Daily Sheeple, where this first appeared, and a co-creator of Truthstream Media. Wake the flock up!