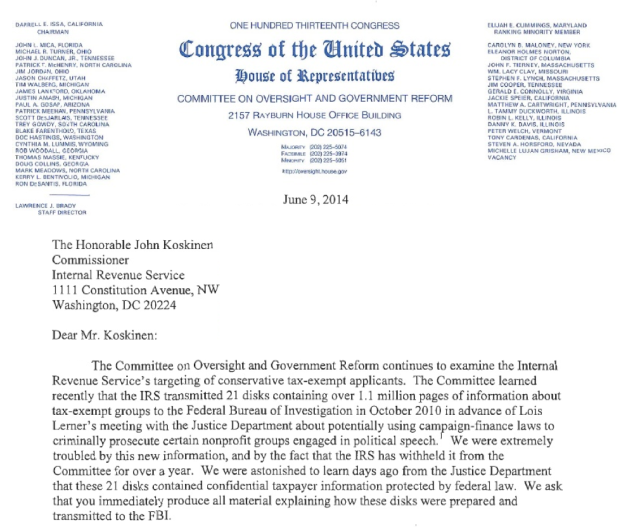 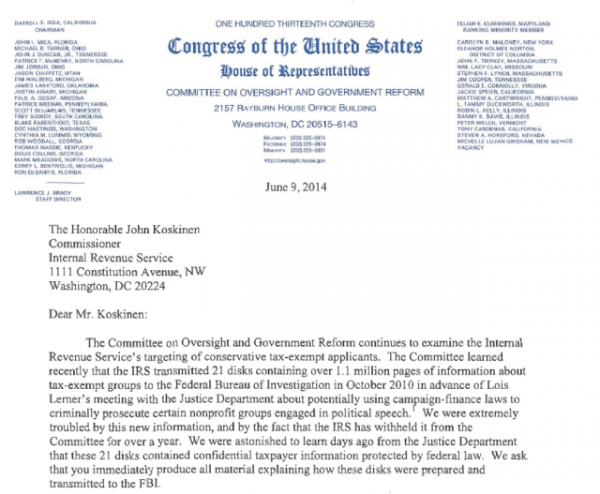 …And the hits just keep on coming. The administration of Barack Obama will certainly go down in history as one of the most corrupt, tyrannical administrations in US history. I’m from the South and despise the tyrant Abraham Lincoln, so when I make that statement, that is saying something. However, newly released documents indicate that Obama’s Internal Revenue Service gave 1.1 million pages of information on US taxpayers to the Federal Bureau of Investigation in order to encourage prosecution of conservatives.

In a letter that was sent from Congressmen Darrell Issa and Jim Jordan to John Koskinen, Commissioner of the IRS, the facts were presented that detail that the House Committee on Oversight and Government Reform recently learned “that the IRS transmitted 21 disks containing over 1.1 million pages of information about tax-exempt groups to the Federal Bureau of Investigation in October 2010 in advance of Lois Lerner’s meeting with the Justice Department about potentially using campaign finance laws to criminally prosecute certain nonprofit groups engaged in political speech.”

The disks that were sent to the FBI, “contained confidential taxpayer information protected by federal law,” according to the letter. So will the law be enforced seeing that Issa and Jordan are seeming to admit that the law has been broken? Probably not.

However, they did demand the Commissioner “produce all material explaining how these disks were prepared and transmitted to the FBI.”

The letter also included copies of email exchanges between then IRS head Lois Lerner and Richard Pilger, director of Election Crimes Branch of the Department of Justice.

Other emails were attached to the letter, including one from Lois Lerner’s predecessor Sarah Ingram, who was over tax exempt organizations at the IRS. She wrote in an email, dated September 21, 2010:

“Thanks, as always, for the excellent support from Media. I do think it came out pretty well. The “secret donor” theme will continue–see Obama salvo today and Diane Reehm (sp). At least SS started the idea that we don’t have the law to do something, although Marcus had a flavor that we just don’t care because we are a tax agency. He should know better even if he is unhappy with the environment and the tax laws.”

Diane Reehm is a National Public Radio host. You’ll notice the reference of the email is to a New York Times story, “As Rules Shift, Donor Names Stay Secret.” Again, we can see how the major media outlets are clearly in bed with the Obama administration and by definition are somewhat complicit in the criminal activity by failing to report the truth.

You would think some people would have been prosecuted for this by now, wouldn’t you? But no, just like Fast and Furious, Benghazi, Extortion 17 and a host of other scandals that aren’t phony, nothing gets done except more hearings and more investigations without Congress writing down one article of impeachment or bringing criminal charges against anyone. But, oh the rhetoric we are hearing from them about the crimes against the American people!

So should we expect for the IRS to produce the material requested? Hardly.

In fact, on Friday the IRS claimed that it would be unable to produce Lerner’s emails to and from the White House and other federal departments due to an alleged computer crash. Seriously? The timing could not be more suspect. We know that there is the technology available to recover data from crashed computers, so this is complete bunk. Will anyone be held accountable? Again, probably not.

I’m not the only one that thought it suspicious either. Take a look:

And Senator Ted Cruz (R-TX) hit it out of the park with this tweet (which by the way, we should ask what is the law that requires us to file tax returns in the first place.

Wonder what the #IRS would say if we told them we couldn’t submit tax documents because of a computer crash… http://t.co/OZAW6vhNR8

Patrick Howley writes at the Daily Caller on what he claims “may go down in history next to the eighteen and a half minute gap in the Watergate tapes, which was supposedly caused by a mistake by Richard Nixon’s secretary Rose Mary Woods.”

“The fact that I am just learning about this, over a year into the investigation, is completely unacceptable and now calls into question the credibility of the IRS’s response to Congressional inquiries. There needs to be an immediate investigation and forensic audit by Department of Justice as well as the Inspector General.”

“Just a short time ago, Commissioner Koskinen promised to produce all Lerner documents. It appears now that was an empty promise.  Frankly, these are the critical years of the targeting of conservative groups that could explain who knew what when, and what, if any, coordination there was between agencies.  Instead, because of this loss of documents, we are conveniently left to believe that Lois Lerner acted alone.  This failure of the IRS requires the White House, which promised to get to the bottom of this, to do an Administration-wide search and production of any emails to or from Lois Lerner.  The Administration has repeatedly referred us back to the IRS for production of materials.  It is clear that is wholly insufficient when it comes to determining the full scope of the violation of taxpayer rights.”

An empty promise, eh? Is that sort of how members of Congress have made threats to impeach Obama if he does this or that, or provide rhetoric about criminal activity to appease the American people while at the same time shake hands with the domestic and foreign enemies of the United States? If you haven’t seen what’s going on and this doesn’t open your eyes to the corruption….on both sides of the aisle, then you just are willfully ignorant and are part of the problem.