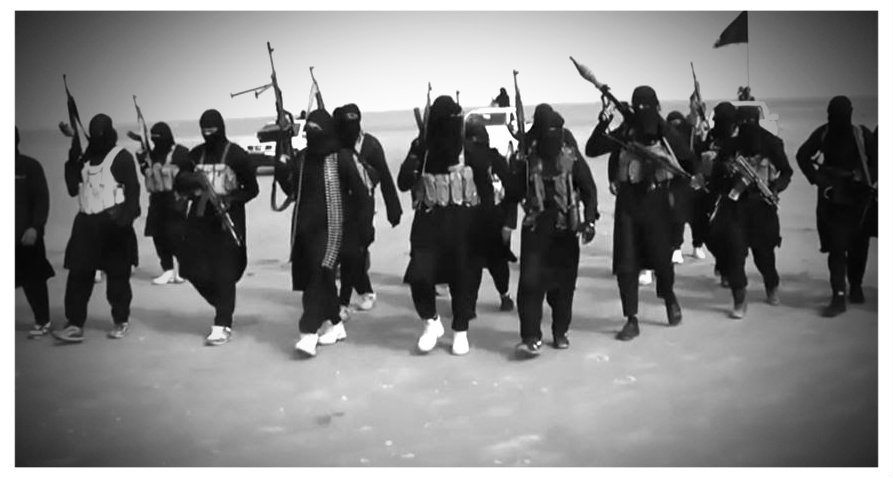 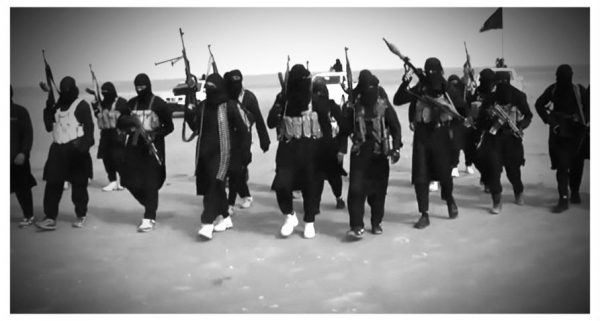 “Baghdad is going to be overrun. The Green Zone is going down.” – U.S. intelligence official

As Iraq is on the verge of total collapse, the stock market is tanking, and oil prices are surging due to the ongoing violence throughout the entire Middle East. And Barack HUSSEIN Obama is doing NOTHING…doing NOTHING in regards to Iraq even after the Iraqi government has asked…has begged…for help. And his lack of action…except to say “we can’t and won’t do it for them” and that Iraq needs to settle its own political differences…political difference he has contributed directly to…will most assuredly result in the birth of a highly dangerous islamic caliphate that will NOT only be the foreboding of a jihadist takeover of Iraq and its surrounding Arab nations, but will be one which will pose a direct threat to America and all western nations as well. 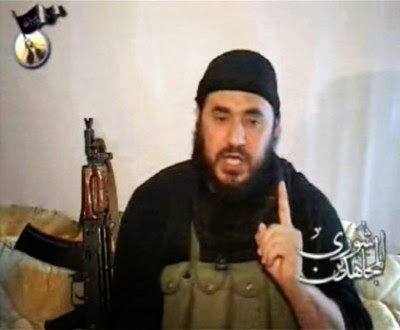 Claiming he was caught off guard…LIAR…by the strength, fortitude, and determination of the extremist group the ‘Islamic State in Iraq and Syria’…an extremely brutal al-Qaida affiliate known by its acronym ISIS and one that’s under the command of Abu Bakr al-Baghdadi, the terrorist released by Obama from Camp Bucca in 2009 and who still has a $10 million reward by the FBI on his head (notice a pattern here)…the major Iraqi cities of Mosul (which is less than one hundred miles from Syria and one that’s strategically vital for funding al-Qaeda in Iraq) and Tikrit have fallen to the terrorists, all while Obama says he won’t send in troops but might consider possible air strikes to help the flailing Iraqi government.

Yet to date NOTHING has been done…NOTHING at all…as the growing in numbers Sunni militants are advancing south towards Baghdad by the hour…as they travel on a road riddled with headless bodies of their doing. And now these newly embolden terrorists are said to be planning to bring jihad NOT only to Iraq but to Jordan, the Gaza Strip, the Sinai, and to Lebanon as well.

And what are the U.S. trained Iraqi government forces doing…they’re turning and running away in surrender. But it’s NOT that they want to surrender, it’s that Obama’s having given out the U.S. withdrawal date for all to hear made their standing and fighting a moot point for once we leave they know they do NOT stand a chance against this well-armed, well-financed jihadi army of sorts.

And to make this situation even worse than just for those Iraqis trying to fight back is the fact that Barack HUSSEIN Obama…the Commander-in-Chief of our armed forces…has now made each and every America death…has made every drop of American blood shed…has made every crippling wound our troops sustained…has made it all for naught as the people and the cities they gave their lives and limbs to free have now been handed back to the very terrorist groups we fought so hard to free this country from. 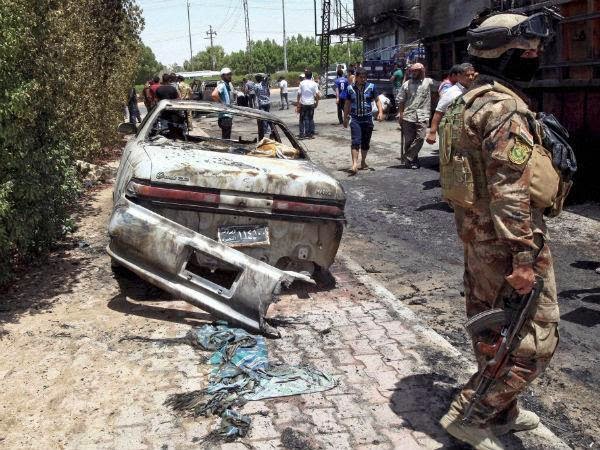 More American blood on his hands as the bottom line is this…Iraq’s most likely soon to be fall is directly the fault of both Barack HUSSIEN Obama and his administration who have NO…I repeat NO…idea whatsoever how both reckless and dangerous its ‘supposed’ foreign policy is as their foreign policy is actually NO policy in support of America or its interests at all. NO foreign policy at all for how does one free and secure a country and then turn its back and abandon it with NO plan in place to keep the hard fought for peace intact.

Simply stated…one does NOT but our beloved America under this man’s watch… under this traitor’s watch…NOT only turns her back on our allies and friends but on we Americans as well.

Yet ‘We the People’ did see this coming…the generals saw this coming…while Obama and crew deliberately chose to look away and ignore the warnings sounded by those of the ground. And as both political and secular violence sadly became part of the Iraqi people’s daily life over this past year…Obama did little to NOTHING to train Iraqi’s army to stand strong against those wanting to undo all we had done.

And again he did little because America’s enemies…because our allies enemies… are indeed his friends…are the ones to whom his true allegiances lie.

And thanks to Obama’s actions…or should I say lack thereof…the die for a total Middle East implosion has been cast as Iran…Iraq’s old enemy…as the very one who wants Israel wiped off the map…are coming to the aid of its long held thorn in its side. Now sending 150 of its infamous, highly trained, elite Revolutionary Guards (with promises to send more as the need arises) to aid the Iraqi government in its fight against the ISIS militants, the very incursion of Iran into the battle lights a fuse to disaster that NO one might be able to extinguish.

And as strategic alliances in the region are forced to change now that Iran has inserted themselves into the mix, what’s left of the Iraqi army’s command has turned over the defense of the all-important oil city of Kirkuk (often called the ‘Kurdish Jerusalem’) to Kurdish forces, who are deploying for yet another attack by the jihadists. And while the Kurds to the north gather for all-out war, Iraqi Prime Minister Nouri al-Maliki issued an all-inclusive call-up in Baghdad for its citizens (30,000 have signed up so far) to help in defending the city against the advance of ISIS and other al-Qaeda forces that are poised to overrun and take over the city…forces that are now less than 25 miles away from the city’s outskirts.

And Iraq falling will affect both the Middle East and the global stage as well. First, with Iraq being a huge oil exporter, damage to its production network will most assuredly have a negative effect on the world economy as oil prices will indeed rise and rise to its highest prices ever. Second, Jordan, a country already overrun with about a million refugees from the civil war in Syria, is concerned…and rightly so… about a possible influx of Iraqi Shiites and then following them with attacks by Sunni jihadistss crossing the Iraqi border. Third, with Mosul being just an hour’s drive from the Kurdish regional capital of Erbil, Turkey’s government is rife with fears that the involvement of Peshmerga (Kurdish) troops into the Iraqi conflict would embolden the Kurds to further their secessionist ambitions into disputed areas that both the Kurds and Turkey claim.

But lastly and most importantly is the Israel vs. Iran vs the U.S. scenario. We all know that Obama wants the al-Assad government gone, and to that affect he has been (ILLEGALLY as in Benghazi) transferring guns and weapons to the ‘supposed’ moderate Sunni (al-Qaeda supported) rebels for quite some time. But with the newest developments in Iraq, including the surprising development of Iran’s siding with al-Maliki’s government, a mutual interest has arisen for the U.S. and Iran as the last thing either country wants is a Sunni theocracy, gleamed from the playbook of Osama bin Laden, sitting on Iran’s western border. But Iran is the chief enemy of Israel and with Obama constantly stabbing Israel in the back, what happens to Israel if Obama outwardly switches sides concerning all things Israel. Israel will NOT take kindly to that and this might just force Israel to do what it should have done years ago…and there’s NO need to tell you what that is.

So as the now probable fall of Iraq brings back memories of the ghosts of Viet Nam…a war that should have been an American victory but one that turned into a hasty retreat NOT because of our brave troops fighting but because of the leaders behind the troops…weak leaders…leaders who put the enemies sensibilities before our own…leaders who did NOT know how to fight to win but only to sustain what they thought of as victory that sadly was anything but…I leave you with the words of Barack HUSSEIN Obama…delusional words by a delusional and evil man who now has the ghosts of America’s dead resting squarely on his shoulders where they rightfully belong.

And anyone who believes that is as delusional as he is…and the Iraqi people know that better than most as they have become the very delusion of which he speaks.