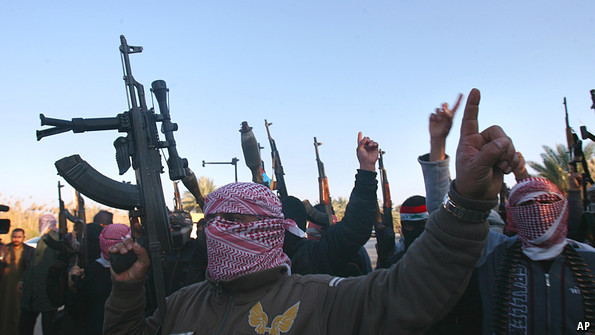 As of Friday, WND reported that 100 American contractors are awaiting airlift from Balad Air Force Base in Iraq. According to one contractor, who spoke with WND via Skype, as many as 300 contractors had already been evacuated from Balad while another 100 were awaiting to be airlifted out. It was reported that the Iraqi Air Force was attempting to evacuate everyone out by midnight local time.

The information provided by returning contractors to WND reported that those colleagues left behind were in essence “abandoned by the US military and were fighting for their lives against an army of jihadists surrounding the base who belong to the Islamic State in Iraq and Syria, or ISIS.” American contractors were in Balad to help the Pentagon in the delivery of F-16 aircraft promised to Iraq by the Obama administration by preparing the facilities for acceptance of the fighter jets. According to the contractors that had returned, Americans were under attack by ISIS from small arms fire, AK47s and rocket propelled grenades (RPG).

The sources reported to WND that American contractors were able to hold the base so far, but many still there admit it is only a matter of time before they are overrun by ISIS jihadi terrorists. Returning contractors told WND that jihadis had closed all escaped routes, the US Air Force was in a stand-down position (not even assisting with air cover for private extradition) and that private exit flights had fallen through as many private pilots quit prior to the scheduled flights.

The attacking ISIS forces approached the base in trucks Wednesday and called through loudspeakers for all private security forces and Iraqi special military to leave immediately or die.

The U.S. private contractors in touch with WND reported that after hearing the broadcast, the private security forces and the Iraqi military defending the base dropped their weapons and ran.

The American contractors collected the weapons left behind and were able to hold off further immediate advances.

WND indicated an update to the story would be coming in the future.

Balad is located approximately 50 miles north of the capitol of Iraq, Baghdad. Business Insider reported that a US official stated that “a few hundred” Americans were being relocated to Baghdad for security reasons. The report filed on June 12, 2014, does not cite any reference to Americans being left behind.

According to State Department spokeswoman Jen Psaki, “We can confirm that US citizens under contract to the government of Iraq in support of the US Foreign Military Sales (FMS) program in Iraq are being temporarily relocated by their companies due to security concerns in the area.”

One US official, who asked to remain anonymous, told Business Insider that the Balad evacuation was being handled by the companies and “did not involve the US government.”

Knowing Obama and the people in his administration, this flippant response by the unnamed defense official goes to show the total disdain for the American people that runs rampant in our government. No, these individuals were not on the government payroll, but were not the companies participating in a US government sales program? So, according to all the “officials” empty heads, the companies participating in this “program” sanctioned by the US government are to go into potentially hostile regions with their employees under contract with a foreign government and basically “be on their own” should the proverbial stuff hit the fan or be left at the mercy of a foreign government.

Yeah, that sounds like a job I would certainly run to take – NOT! How many company heads are Ross Perot? As far as I know, there was only one company head willing to risk it all to get his people out from a hostile area when the government abandoned them; that was Ross Perot.

Obama, saying no to Iraq, basically said no to helping American citizens under contract with a foreign government through our own government’s sales program. More importantly, Obama said, “yes” to the insurgency of ISIS jihadi terrorist to take what they want. What can you expect from the Muslim-in-Chief? Oh yes, that’s right, Obama will negotiate to release high-level terrorists, to the count of 5, for one American soldier, who might be a deserter, traitor and Muslim convert, but will not protect American contractors participating in a government run program.

Reports have surfaced that indicate these ISIS terrorists have left the countryside littered with the severed heads of the dead. Is this what awaits Americans that are left behind if they cannot or will not be extracted? One can almost guarantee it when it involves the supposed “religion of peace.”

As usual, nothing will be forthcoming about this in the mainstream media as they are complicit in covering only the propaganda issued by this lawless, corrupt, killing machine administration run by Obama and his ilk. More blood will be on the hands of Congress, Obama and everyone associated with the branches of the federal government should these Americans fail to make it to safety.

I am not one who is in favor of military action for every problem in a foreign country or interference in internal conflicts within foreign countries. However, when the lives of Americans are at stake, whether on the government payroll or not, the government should have some responsibility in their safety even when under contract to a foreign government. It is not acceptable to abandon Americans to terrorist insurgents when they are participating in a government run program such as Foreign Military Sales or expect a foreign government to guarantee the safety of Americans. It is not acceptable either to expect a private company to be responsible for an extraction in an area of combat, which is what is happening in Balad. These individuals are not CIA nor Special Ops, nor are they Blackwater that can be “plausibly denied” in the event of problems or be determined “rogue.” And, let’s not forget all the lives of American soldiers lost and those permanently injured, who served in Iraq to make the headway that was made there. This is not an internal conflict between sects wanting control of government. This is an invasion of insurgents, terrorist, into a sovereign country for the sake of unseating its government placing civilian Americans in harm’s way. Since that government’s forces have failed to protect our American citizens, should it not then fall to America to protect her own?

But, our own government will not protect America’s own borders and sovereignty from invasion from insurgents in the form of illegals. It stands to reason they would leave civilian American contractors to being over-run by foreign terrorist insurgents in a foreign country when that country has failed to protect Americans. After all, who has funded these terrorists by supplying arms and probably financing as well? It is no secret that the Obama administration has been supplying arms to Syrian rebels, who, in fact, are members of ISIS and al-Alqaeda. Obama himself announced the end date of troops in the area making it easy pickings for these armies of the devil.

Hopefully, these left behind American contractors will find their way out and into safe harbor.

Should that not be the case, Obama will have to spin some sort of lie or blame it on something; he will certainly not be at fault for any of this. In this case, it can’t be a video. It will probably be Bush, Republicans or some official willing to be thrown under the bus as it cannot be because of foreign policy of “no real foreign policy.”

Let’s face it America, we are looking at a total failure when it comes to the actions of our current government. They deserve a rating of worse than negligent – treason comes to mind. The question still remains, “what are we going to do about it?”