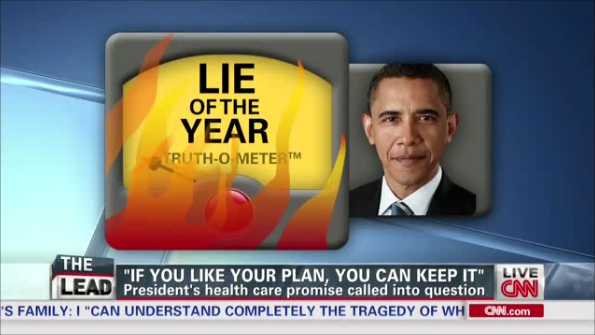 First and foremost, Barack Obama is a congenital liar, whose lies, the number and magnitude of which are produced to match the scale of his sweeping narcissism.

That type of behavior is no surprise because Obama’s character was incubated in the low expectations biosphere of political correctness, where the amount of ineptitude is excused in proportion to one’s racial genetics, ethnic purity or whatever victim categories the liberal canon dictates.

Obama has had no incentive to change because throughout life and during his time in the White House, lying has gotten him what he has wanted, while escaping responsibility and any negative consequences.

America’s elite universities and the media, desperately wanting to validate their own ideological predispositions, have overlooked Obama’s obvious weaknesses and willingly accepted his excuses and political spin in order to avoid their own accountability for facilitating and advancing the career of an amoral and intellectually vacant individual.

For the Democratic Party, Obama was the textbook Affirmative Action Presidential candidate, the manifestation of a liberal fantasy.  Senate Majority leader Senator Harry Reid (D-NV), wowed by Obama’s oratorical gifts, said privately that Obama, as a black candidate, could be successful thanks, in part, to his “light-skinned” appearance and speaking patterns “with no Negro dialect, unless he wanted to have one.”

Obama’s appeal is based entirely on his mastery of the teleprompter-delivered platitude; a banal or meaningless statement either emotionally satisfying to his ideologically committed base or soothing to the uninformed, easily misled voter desperately in search of a political tranquilizer.

Obama, who never intellectually matured beyond the clichés of fashionable and comfortable college Marxism, received his political baptism in the leftist, gangster-style Chicago political machine, experiences neither of which prepared him for any office beyond the capabilities of inner city alderman.

Ill-prepared for high office, Obama has orchestrated an unprecedented series of policy failures and political scandals.

That happens when decisions are not based on a logical analysis of what course of action is best for the country, but on a calculus of what best meets certain political or electoral objectives.

Obama is an ideologue, whose fundamental transformation of the United States includes goals that are incompatible with American values and national interests. His approach is not unlike pounding a square political peg into a round political hole.

The ultimate basis for any judgment about the rightness of his conduct is whether he achieves an important ideological aim. Thus, “right” outcomes for Obama often necessitate actions considered illogical or harmful by mainstream Americans.

Obama is incompetent, not because he is stupid, but because his intellectual rigor mortis drives an ideological “analysis” that inevitably leads to inaction or the wrong action.

Stated simply, Obama is mentally and emotionally incapable of making the right decisions for America.

Obama’s reaction to his policy debacles is invariably the same. He lies or blames others because his narcissism cannot accommodate failure and any perceived loss of public adulation.

Enough is enough. We are a nation, not a political playground for megalomaniacs. Soaring rhetoric is no substitute for competence, honesty and resolute action.

A continued Obama Presidency risks the survival of the United States. He is and does what he is. There is no hope that he will change and no limit to the damage he can cause.

Will Congress decide it is time for Barack Obama to go?

Lawrence’s post first appeared at Family Security Matters and is reprinted with permission.