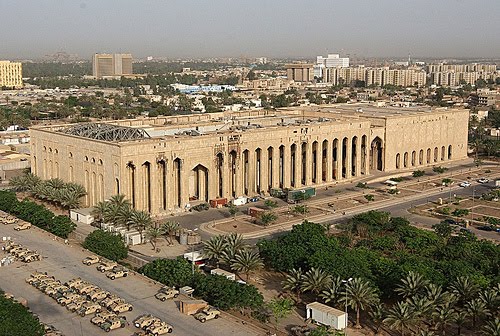 The events in Iraq are spinning out of control faster than one can report the unfolding holocaust. As Mark Twain once said, history may not repeat itself but it sure does rhyme as Obama is attempting to create a second Iranian Hostage Crisis.

The situation in Iraq has gone from bad to worse as last week witnessed the capture of Iraq’s second-largest city, Mosul. Sunni militants from the Islamic State of Iraq and al-Sham, also known as the ISIS or ISIL, introduced strict religious law on the city, barring religious freedom and requiring women wear to veils. The radical group later advanced south, seizing Saddam Hussein’s hometown of Tikrit. It is the fundamentalist Iranian hostage crisis revisited.

Obama Is Trying to Recreate An Iranian Hostage Crisis

I interviewed Doug Hagmann last night on The Common Sense Show and he stated that he feared that Baghdad could fall to the “Jihadist insurgents” within 48 hours. Some of my sources feel that Baghdad could hold out for a week, but not much longer because Obama is showing signs of abandoning the embassy personnel in Bagdad just as he abandoned Ambassador Chris Stevens and his four fellow Americans at Benghazi.

I see another parallel as well which is frightening beyond belief.

The State Department has acknowledged that there are credible reports that implicate ISIS forces executing captured Iraqi soldiers along with entire neighborhoods of captured towns and cities. The State Department stated that “we condemn these tactics in the strongest possible terms and stand in solidarity with the Iraqi people against these horrendous and senseless acts of violence.” This violence will be used as another pretext for war.

There are thousands of Americans in the U.S. Embassy in Baghdad.  These Americans are apparently frightened, with many wanting to be evacuated out of Iraq.  This is not happening. (Editor’s note: Only a partial evacuation has taken place. The embassy is still operating.)

The Obama Administration fears that evacuating the U.S. Embassy in Baghdad might make Obama appear to be weak.  Fox News reported on the dire situation and Obama’s decision to risk the lives of innocent Americans because he wants to use the situation for political profit.

As things go from bad to worse, it is now known that there are 600 American contractors that are presently stranded at an Iraqi Air Force base. Fortunately, Obama had the foresight to evacuate the U.S. military personnel in the area. Inexplicably, as he played golf in Palm Springs, he failed to evacuate the American contractors. Failing to do what Obama failed to, at least the Iraqi Air Force has been evacuating the Americans, yet, reports on the ground indicate that as many as 200 still remain in harms way. Meanwhile, Obama was trying to decide if he should use his nine iron or pitching wedge on hole 6. By the way, Obama did not ask for approval, by the Iraqi forces, with regard to the evacuation of the 400 of the 600 contractors left behind. Unbelievably, in a heinous act of insensitivity, Obama refused to provide military cover for the evacuation of the 400 American contractors. In further consideration, perhaps Obama is not being insensitive, maybe, he is being calculating.

Those of us old enough to remember the fundamentalist Iranian forces who stormed the American embassy in Tehran and held embassy personnel hostage for over a year, must be experiencing flashbacks, because it is ready to happen again.

The Iranian Hostage Crisis event was the final nail in the political coffin of President Jimmy Carter. In the midst of Iranian forces murdering innocents and threatening Americans, Carter, at the behest of National Security Advisor,  Brzezinski, did nothing to protect the embassy. Brzezinski as we all know is the ultimate insider. He was the co-founder of the Trilateral Commission and is at the center of all globalist schemes. The Iranian Hostage Crisis was a contrived event.

The endgame result of the fall of the American embassy in Iran was to polarize the region, create even more “oil shortages” due to manufactured political discord and thus, dramatically drive up the price of oil. Meanwhile, the “Us vs. Them” Hegelian Dialectic was born in the Middle East. Terrorism jumped from the shadows into the spotlight. This lead to a direct attack upon civil liberties here in America, culminating in the 9/11 attacks and the Constitution has never been the same.

In Baghdad, Obama has reinforced the embassy with 100 marines and army soldiers. This is like sticking your finger in leak of the Titanic. The US Embassy is going to fall. The only question remaining is whether or not Obama will let these people die, or will he rescue them from the roof tops by helicopter in an evacuation covered by F-16′s? Clearly, the embassy personnel are political fodder for a larger purpose and what purpose would that be?

No Excuse for War Is Complete Without Martyrs Could you write this script along with me? I can see it now, embedded CNN reporters, who are paid to only report what they are told to report, will show images of American embassy personnel being lifted one at a time in a harness and pulled up to the waiting helicopter. The Marines guarding the embassy will be forced to cover the withdrawal and will be sacrificed. These men will be the martyrs designed to enrage the American people and stir the public up into a war frenzy. In a scene from the show, 24, perhaps we can mix in a helicopter, or two, knocked out of the sky by insurgents shooting RPG’s from the back to Toyota pickup trucks. Pickup trucks, where do these Iraqi insurgents get the pickup trucks? They get them from the same place as the al-Qaeda did in Libya, from CIA operatives, such as Christopher Stevens, who are funding both sides of this fight.

There are even more martyrs being created across the country as American contractors, left unprotected by Obama, will provide even more fodder which will be served up to the sheeple public who don’t know any better.

Get ready, this week you are likely to see the conflict in Iraq enter your living room in a manner not seen by the American public since the Vietnam War. The reports of American deaths in Iraq will be greatly exaggerated in order to get the desired effect.

Meanwhile, ISIS, after conquering Iraq, will be headed toward the Syrian border and this is where America and Russia will face off in their first real war. This is the goal of the CIA. ISIS will overwhelm Assad and Russia will not permit this to happen and intervene. How this is likely to unfold will be the topic of Part Two where the why’s will be explained.