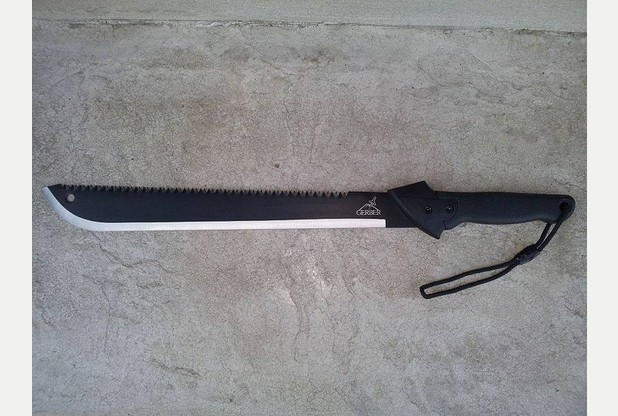 The mainstream media demonizes guns every time a crime committed with one occurs. Yet, stories of people who defended themselves with guns rarely make headline news.

Elliot Rodger’s case is a sad example of this bias – the disturbed young man stabbed three men to death at his apartment before shooting five people and striking four with his car. After his horrifying crime spree, the media screamed for more gun control.

The fact that Rodger stabbed three people to death was barely mentioned.

Where were the cries to ban knives?

During a scan of news stories today, something caught my attention: I noticed two cases that involved a weapon that we don’t hear much about in America. I wondered how often crimes with this particular weapon are committed in here in the US.

It didn’t take much research to find the answer.

Here is a sampling of news stories from the last month or so (several are from the last two weeks) that involved the use of a particularly barbaric weapon: the machete.

In CT: A man armed with a machete robbed a Dunkin’ Donuts in Manchester last Monday.

He attempted to walk through the front door, but it was still locked, so he decided to climb in through the drive-thru window.

Police said he forced two employees to the floor and ordered a third to retrieve an unknown amount of cash from a register.

In OR: A Portland man accused of striking his father-in-law in the head with a machete has been booked into Multnomah County Jail on assault charges.

Police say the father-in-law, who was not identified, suffered serious but not life-threatening injuries.

In NY: Three men were wounded after a man with a machete stabbed them after a fight inside a Brooklyn catering hall early Saturday.

The most seriously injured victim, a 19-year-old man, suffered a severed artery in his neck. A 20-year-old man was sliced in the chest and a 34-year-old man who was cut in the right forearm were both treated and released from the hospital.

The suspect robbed a 7-11 store on May 10. Witnesses say he jumped over the counter. The stunned clerk gave up cash without resistance.

In CO: At least one person was arrested Monday morning after police found a man with a large cut on his head and armed with a machete in downtown Colorado Springs.

He was taken to a local hospital and was released soon after, police said.

In FL: Gainesville police say a homeless man was so upset over someone honking their horn that he pulled out a machete:

GPD says Richard Davis-Van Duzer became irritated when a woman arrived near the entrance of the Sweetwater Branch tent city in Gainesville to pick up her mother.

The woman honked the car’s horn to notify her mother she was outside waiting for her and Davis-Van Duzer walked out of his tent to confront the woman, telling her she had no business honking the horn.

The two began arguing and that’s when Davis-Van Duzer went into his tent and grabbed a machete.

Passersby were able to break up the confrontation.

In AL: A Jackson County man is in critical condition after what investigators believe to be a machete attack.

On Sunday, the victim, 41-year-old Chris Gaylor of Stevenson, was severely wounded on his arm and leg by what is believed to be a machete.

In NV: A woman was hospitalized after being stabbed with a Machete at a Burger King on Sunday morning.

Police said a male suspect was detained shortly after the stabbing.

In NM: 32-year-old Eric Coleman killed his 26-year-old neighbor, identified by police as April Briceno, in a machete attack and stabbing.

In OH:  Adam E. Runyons Jr., 32, is accused of killing his father, Adam E. Runyons Sr., 51, with a machete May 29. He has been indicted by a grand jury on charges he murdered his father in what Licking County Prosecutor Ken Oswalt called a “gruesome” and “vicious” crime.

Why don’t we hear much about these stories in the mainstream media?

Could it be because they don’t support the anti-gun agenda?