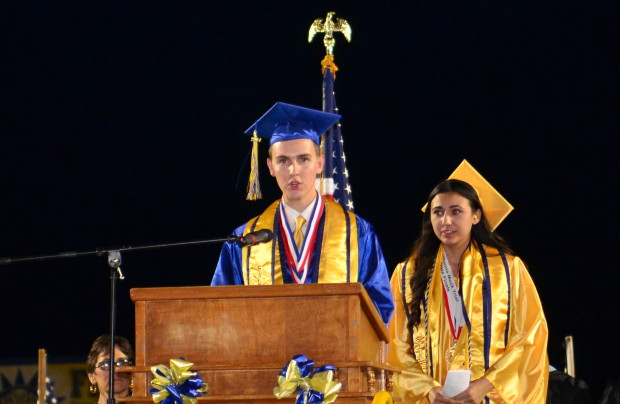 When I see stories like this one, I truly believe that though the darkness seems to be closing in around us, that in the next generation there are still those that are being raised up who will stand against the darkness. Brooks Hamby seems to be one of those young men. After discovering he was his class’s salutatorian at Brawley Union High School, Hamby submitted three drafts of his speech for graduation, only to have them rejected by school officials for mentioning his Christian faith.

Friends, before I begin, I’ve said it all along that we should not be sending our kids to these government indoctrination centers, but give ourselves to doing whatever it takes to educate them ourselves. After all, this is what parenting is.

However, when confronted with being told he could not mention God, the Bible or the Christian faith, watch and listen to the boldness of this young man; something faintly familiar to the great Reformer Martin Luther’s own words, in which he said in the face of the tyrannical Roman Catholic Church that sought his death:

“I cannot and will not recant anything, for to go against conscience is neither right nor safe. Here I stand, I can do no other, so help me God. Amen.”

Hamby, not swayed by the pressure of school officials, demonstrated the same thing Luther did. He openly and boldly proclaimed the God of Scripture and asked for His blessing upon the graduates.

“No man or woman has ever truly succeeded or been fulfilled on the account of living for others and not standing on what they knew in their heart was right or good,” he added.

He then concluded with a quote from the “biggest, best-selling book in history.”

“You are the salt of the earth, but if the salt loses its saltiness, how can it be made salty again? It is no longer good for anything except to be thrown out and trampled underfoot.”

“You are the salt of the earth,” Hamby stated. “Be strong and stand for your convictions and stand for what is right, what is ethical, what is moral and Godly, no matter what is the cost to you.”

“Stand for what is good wherever you go and whatever you do,” he admonished.

In concluding his remarks, Hamby congratulated the class of 2014 and pled that the God of the Bible would bless them in their future endeavors.

“Congratulations Class of 2014,” he said. “Thank you, and may the God of the Bible bless you, each and every one of you every day for the rest of your lives.”

Hamby was chosen as a US Senate Page last year. Interestingly enough, he was sponsored by far left, Democratic California Senator Barbara Boxer. Selected as one of 30 students, the son of Mark and Trina Hamby did not provide self-aggrandizement, but rather said, “I am humbled to be able to witness and participate in this way to learn to serve my God and Country to the fullest extent in my future.”

Friends, this is what it will take. It will take young and old in America to stand up to those seeking to shift our civilization, who constantly use Marxist and Alinsky tactics to strike fear in our hearts. But we are free men. We must not bow or be scared to stand for the God of the Bible or for His Son, the Lord Jesus Christ, to whom every knee will bow and tongue confess that He is Lord to the glory of God the Father.

May He grant us the same grace and courage to do as Brooks Hamby and may He give us the victory over His and our enemies and restore us both in repentance of sin and the restoration of the United States of America for His name’s sake. Amen.