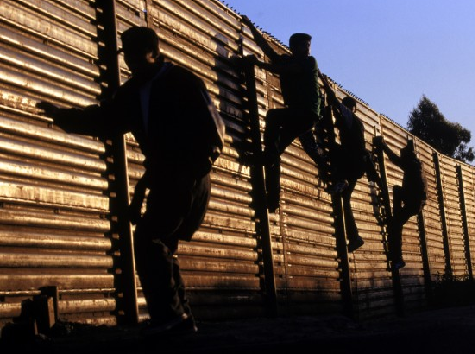 By now, most of us on this side of the pen, or the display, or the microphone, have written or spoken of the Mexican-American border problem.

With thousands upon thousands of “children” crossing every week, it would seem that our southern border is wide open. Thanks to our president, the border patrol and other authorities are overwhelmed, leaving little if any manpower to patrol.

So, who else might be taking advantage of the Southern sieve? It certainly wouldn’t be Islamic terrorists, would it?

Now, we commentators have also written and spoken extensively of the Cloward and Piven strategy – a strategy to purposely overwhelm the system to the point of collapse. We have postulated that this is exactly what Obama is doing at our southern border.

I believe this to be true. But I also contend that this strategy may have dire consequences beyond just the illegal immigrant flood.

Already these illegals are being shipped all over the country to take up residence at military bases – Arizona, Texas, Oklahoma, California, and even Massachusetts. And these are the ones that we know about. No doubt the list of states will grow as more and more enter.

With the border wide open, anyone can cross. Now is the perfect time for terrorists to arrive and set up cells across the country.

WSB news in Atlanta claims that at least 300 Somali terrorists from the al-Qaeda affiliate al-Shabaab are already here, but their location is unknown. However, it is a fact that they are here.

As an aside: if a terrorist or group of terrorists crosses the border, will they get hassled or threatened by the drug cartels or traffickers? I wonder how that works. Does an Islamic leader from overseas call a Mexican drug lord and alert him that Mohammed al-Mustafa al-Bakiri al-Mohammed is heading your way and to steer clear or assist his passage? Maybe the Imam from an Islamic mosque in this country puts the word out. Maybe the Muslim Brotherhood, like UPS, loves logistics.

The next logical question to ask is; does the Obama administration know that this must be happening – that with the flood of “innocent children” there will be Islamists, bent on our destruction?

But, you may ask, “They’re only children, what could they do?”

The direct answer is nothing, but let’s not be naïve and assume the adults are being turned away.

So is Obama stupid enough to think that only “innocents” are crossing, or does he just not care?

And now for a little conspiracy fun.

Is Obama purposely allowing terror cells to form in the United States? Could it be that the destruction of capitalism and reformation into a state-controlled society is just not happening fast enough? Are they encouraging domestic strikes as a better/quicker way to facilitate a government takeover?

Is the ultimate goal martial law, temporary government control of everything and everyone? Of course, it would be temporary just long enough for most citizens to get used to the “new normal,” and then some form would become permanent.

Now look at where I’ve gone with this simple immigration rant. I’ve taken it from “dreamer” children to adults, to terrorists crossing the border, to them forming terror cells throughout the country, to domestic attacks, to temporary martial law, to permanent martial law.

Okay, I’ve completely lost my mind, and I’m partly kidding – partly – but just 10 years ago, would you believe we’d have a president who fancies himself a dictator – one who gets away with picking and choosing which laws to follow, or making up his own?

Would you believe that in America, what is currently happening at the border could actually occur?

As Obama continues to push the dictatorial envelope, maybe we should stop discounting anything as being beyond the pale.