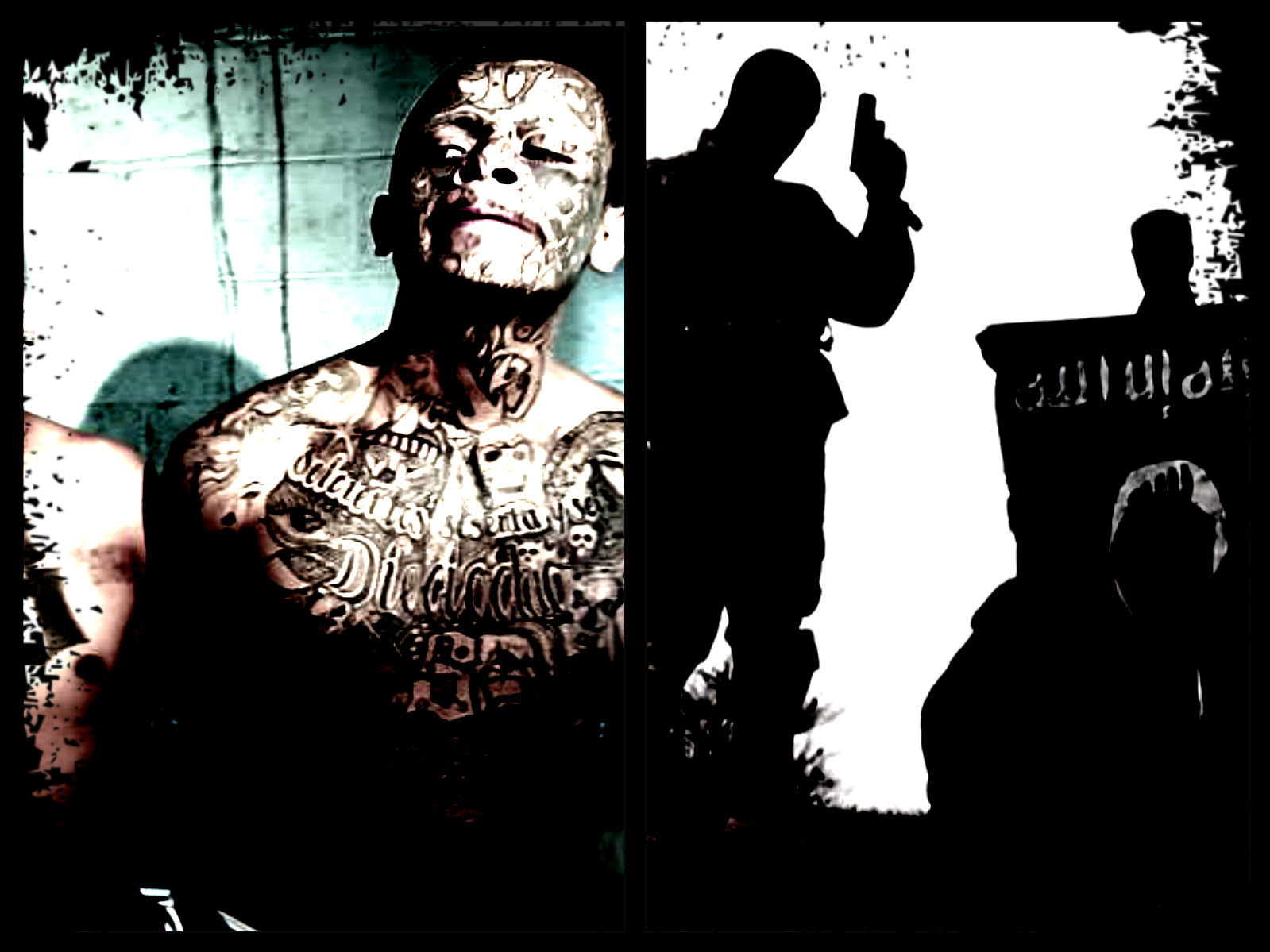 WARNING: The links to violent images, courtesy of Mexican drug cartels and al Qaeda, are disturbing.  Proceed with caution.

This weekend, you could practically hear gasps of horror from your neighbors as chilling pictures and video emerged of mass murders being committed by ISIS (Islamic State of Iraq and Syria).  The jihadi group, which has conquered a number of cities in Iraq and now has its sights on Baghdad, lined up captured Iraqi military prisoners, laid them in a ditch, and then shot the defenseless men to death using AK47s.  ISIS has reportedly executed thousands of prisoners in a similar manner.  So much for Iraqi liberation, huh?

To be sure, the images out of Iraq are enough to make you lose your lunch.  But if ISIS has managed to cause a public outrage, it is somewhat surprising.  For this sort of mass murder occurs with frequency in Mexico, practically unnoticed by the denizens north of the border.  Referencing the Wikipedia article on the Mexican Drug War, since December 2006 until the present time, more than 100,000 Mexicans have been murdered as a result of cartel violence.  Mexican authorities routinely discover mass graves – see here, and here, for example.  Much like jihadis, who slaughter their prisoners in a way reminiscent of livestock (halal) slaughter, Mexican cartels are fond of mass executions using lead (“plomo”), as well as decapitations (see here, too).   Although the Wikipedia article chronicles the violence beginning in 2006, the present-day Mexican cartels have long histories, most going back to the 1990s and earlier.

It is instructive to compare the response of the neighboring nations of Iraq and Mexico.  Iran responded to Iraq’s descent into barbarism by activating their military.  In contrast, Obama’s policies on illegal immigration and border security have been alarmingly lackadaisical.  He has looked to Mexico, one of the most corrupt and violent states in the entire world, and opened America’s gates wide.

Consider some top level data and anecdotes regarding illegal immigration from South America under Obama.

Knowing that levels of violence in South America, mostly a function of drug cartels that have achieved state capture, the legal and moral case for these children to declare asylum is strong.  Yet as documentary filmmaker Dennis Michael Lynch explained on Megyn Kelly, the children refugees are functioning as a distraction to the real purpose of this cross-border surge: the importation of cartels.  The entire segment on Megyn Kelly is worth a watch.  If for nothing else, to see how genuinely distraught, even spooked, the documentarian is by what he has witnessed firsthand on the southern border.

With numbers as large as these – 35,000 per month, 60,000 children this year – there is no reasonable expectation that these people can be processed properly.  Background checks, health checks (for disease), security checks – the normal procedures for immigration – are just not feasible on this scale.  Simply put, that means that among these “refugees,” there are violent criminals, vectors of communicable disease, rapists, murderers, and gang members of every variety.

Why write an article on Iraq, Latin American drug cartels, and the Mexican-American border?  No, this isn’t Mad Libs.   The tie that binds here is narcotics.  This rest of this article will explore the similarities and the coincidences of interests between al Qaeda and Mexican and Latin American drug cartels.  In such a light, the Obama-encouraged invasion of illegal immigrants into the American interior, which has been ongoing for years but is reaching a critical level this summer, is highly unnerving.

When Americans think of the Middle East, they usually think Israel, Palestine, religious wars, terrorism, etc.  But few appreciate how permeated the Middle East is with drugs, and how these drugs are related to terrorism and politics in the region.  Indeed, in March 2012, the academic journal Terrorism and Political Violence published a special issue dedicated to the relationship between organized crime and terrorism.  A series of essays details the overlapping interests of drug cartels and political terrorists.  For the quickest explanation what brings these types together, one needs only to identify the common trait between a good terrorist, and a good cartel leader: the ability to murder, whenever, wherever, without hesitation or regret.

Notable examples of terrorist organizations that have turned into drug cartels include the FARC of Colombia, responsible for a sizable chunk of coca growing (for processing into cocaine), and the PKK of Turkey and Syria, who are intimately linked to the heroin trade in conjunction with the Russian mob.  The nature of a terrorist political insurgency, operating across borders and organized by cells, makes them ideally suited to function as traffickers.  And the money provided to terrorists by narcotics sales is more than enough to fund their meager operational models; car bombs don’t carry the same price tag as high tech drones.

As for the cooperation between Mexican/Latin American gangs and various al Qaeda groups, there is evidence in several forms.

Finally, when thinking about this federally sanctioned invasion of drug dealers with direct links to al Qaeda, keep in mind that the United States is in the midst of one of the worst heroine epidemics in our history.  A Delaware newspaper writes,

“The United States is in the grips of one of the worst heroin epidemics in its history, due in part to a flood of cheap doses of the drug, which can be had for as little as $4 apiece, ordered on dark corners of the Web and delivered to your front door in the suburbs. In some regions, heroin is deemed “highly available” by local police in more than three times the number of communities as it was just seven years ago.”

All over the country, especially along the Eastern seaboard, children in middle schools and high schools are getting addicted to the drug.  A few days ago in Phillipsburg, New Jersey, police busted Qaadir Muhammad and Karen Muhammad, who appear to be African Americans but have adopted Islamic names, with 500 bags of heroin.  Baltimore, Maryland has become the “U.S. heroin capital.”

The source of this cheap heroin is Mexico.  There must be a glut, considering that a dose is down to a paltry $4.  But hey, it’s affordable for most tweens.

Given the overwhelming evidence of trade between al Qaeda and Mexican/South American cartels and gangs, it is totally plausible to assume that al Qaeda prospers as a result of lax border security.  It only stands to reason that Qatar, who has been allied with al Qaeda in Libya and Syria (and now presumably Iraq) also reaps the benefits of a growing base of drug users.

Doha, you might say, is the preeminent example of the terrorism-transnational crime nexus in the world today.  Ollie North claims that Qatar (possibly someone else) paid the Haqqani Network bribe money to free POW Bowe Bergdahl, and in exchange got custody of the Taliban 5. We now know that these Taliban leaders are living in luxury in Doha, complete with masseurs(!).  As Qatar has no problem welcoming in terrorists, so they have no compunction about profiting from the drug trade.  Indeed, Boko Haram of Nigeria, with seed money from Qatar, was set up as a “money making venture,” with business lines in kidnapping, slavery, and drug trafficking.  Already in a formal strategic alliance with the Taliban’s heroin traffickers (NATO subcontractor NLC), they last year stated their intention to invest USD $100 million in Mexican “tourism” in a region known for its mind-altering flotsam.  Reader, the pattern should be getting clearer.

Who benefits from this amnesty?  It is not the citizens of the United States, who are having their communities flooded with immigrants of a different culture, most whom do not speak English, and too many who are confirmed criminals and cartel members.  The Obama-led refugee program is reminiscent of the Mariel boatlift in 1980, which welcomed thousands of Cuban criminals and mental patients onto our shores, and inspired the movie Scarface (cf.the blow).

However, if your name is al-Thani, and your Kingdom is Qatar, what do you care if America is invaded by drug dealers?  What do you care if America’s children, infidels, are getting addicted to heroin in record numbers?  What do you care if Mexico and El Salvador have public safety records only marginally better than Syria?  You’re Tony Montana, and you’ve got “the money” (thanks to the drug trade), “the power” (because you’re protected by two massive American military bases, Al Udeid and As Sayliyah), and “the women” (whom you’re selling into sex slavery).

There are many reasons to be outraged at this latest amnesty scheme, which may yet lead to civil unrest.  You don’t invade communities with questionable foreigners and expect it all to work out just fine.  But putting aside Obama’s penchant for creating chaos in everything he touches, the logical winners of this sham are the cartels.  And when it comes to cui bono from narcotics and related smuggling activities, the al-Thani family of Qatar, patrons to al Qaeda, should be considered as guilty as any Chapo or Pablo Escobar.