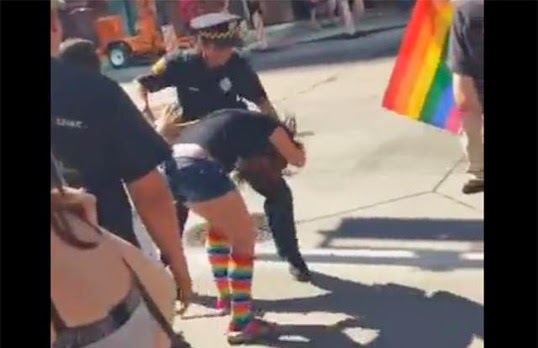 This cellphone video captured by someone at Pittsburgh’s PrideFest on Sunday is making a lot of people angry. Aside from everything that is wrong with it – there’s something else really, really wrong. No one’s talking about the disturbing comment the officer made later as justification for what the video clearly shows happening to Ariel Lawther, age 19: hairpulling, throwdown, grabbing hair as a stronghold to better punch her in the stomach multiple times.

WTAE printed the officer’s lengthy account justifying knocking her down and pulling her “by the head,” including this:I punched Lawther in the left abdomen several times to distract her enough so I could handcuff her. And perhaps more disturbing, he followed his comment with:I quickly moved Lawther and I away from the crowd for her and my safety.While beating her…Since when is sucker-punching used as a qualified distraction for arrest? And pulling someone away (according to a witness, it was by the throat before a throwdown) for both the victim’s and officer’s safety? But instead of calling the officer’s sanity and rage into question, it becomes a discussion about her deserving it and the need to isolate a beating for safety’s sake. Lawther was arrested and is charged with four counts: aggravated assault, resisting arrest, simple assault and disorderly conduct.Lawther was likely involved in an altercation with protesters at PrideFest. Again, not a call for police brutalization. He claims she was beating him up before it happened and that she “confessed” with an apology for punching him, not knowing he was a cop. That account has been called into question due to his presence there during the afternoon and comments he made to her before the alleged altercation between her and a protester. Also, a witness said she did not fight him. He actually wrote in his report that it was her “rage” that made it so she couldn’t see him (that he was a cop). (Why the cop worship?)During an investigation the officer is being removed off the streets; perhaps, for his own safety as he built a complex story about threats to his safety in the crowd. More absurd, is his long, more complex story about Lawther beating him up and injuring him. While we can’t see what happened before he beat Lawther, the rest of what he says does not match with the video footage, and no one’s mentioning that either. Because of this, his police report should come under scrutiny.Word to the wise – if you want to be safe in a crowd, perhaps try not relentlessly beating a woman. Of course, even with the outrage, no one threatened the safety of this brave man. Which again, calls his testimony into serious question.If you watch the news report from WTAE, you will hear the anchor talk about an investigation to see if the force was justified.Answer: No.It almost never is. But by presenting it that way, it distracts from the core issue and implies that there might be some rationale for punching someone repeatedly while pulling hair and knocking her down. Completely shielded from the discussion are very basic, bottom line civil rights.The scary truth is that he wanted to beat her. And it didn’t matter who was watching or recording.Many readers of what is often called alt-media have become just as acclimated to police brutality as the average Joe. Do not acclimate, whoever you are. Do not find reasons to justify abuse any more than you would in other types of situations such as employer-employee relationships or domestic spats.Imagine someone giving this report after a domestic dispute:I had to punch her a few times in the abdomen to distract her…And of course, in order to effectively punch, I needed to grab hold of her hair, but only after grabbing her throat and throwing her to the concrete. That way, I could tie her hands. I pulled her away from people – for our safety. She was hysterical, so I had to subdue her before I could subdue her… You know how it goes…