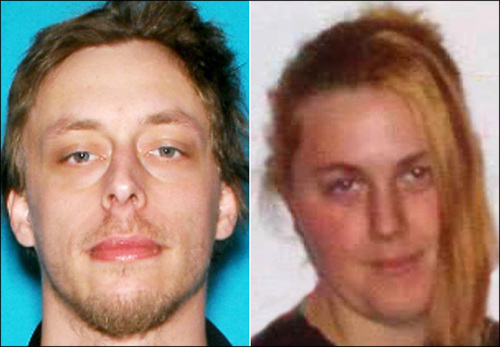 Jerad and Amanda Miller, the Vegas shooters, have tried to be attached to the Patriot Movement, in an attempt to smear law abiding, small government minded Americans. We’ve known that the media made attempts to put them directly in line with those that gathered to protest the Bureau of Land Management’s takeover of Cliven Bundy’s ranch. However, the Bundy’s clearly kicked Jerad out when they discovered who he was, realizing that he was not a patriot, but a known “felon.” Interestingly enough, many have yet to report something buried in a Reuters report dated June 11, 2014. Jerad and Amanda Miller were informants for the Las Vegas Police earlier this year.

According to police, the Millers had cooperated with Nevada law enforcement twice this year to provide witness testimony, but detectives did not receive any indication that the couple had anti-police sentiments.

We are not told what they were informing about and calls to the Las Vegas Police Department yielded no information either. However, consider the fact that earlier this year the Bundy Ranch standoff was taking place and Miller was there briefly. This should cause us to question whether or not he was providing evidence to the police regarding what was taking place there.

It also raises the question of whether or not this was the individual that many in the militia, who stood along the side of Cliven Bundy, questioned as an infiltrator. Was Jerad Miller a government mole, whose leash was tied to the LVPD and as a result used by the federal government as an informant, not once, but twice?

One thing is for sure, Miller was no patriot. In fact, the Las Vegas Review Journal reports extensively on his criminal activity, family dysfunctions and alleged “awakening.”

At least the LVRJ had the courtesy to state in the first sentence that the Millers “weren’t Oath Keepers, sovereign citizens or militia members.” Instead, as the LVRJ reports, they “fashioned themselves as revolutionaries, but they weren’t accepted by anyone — not even their own families.”

Jerad was the son of conservative Christian parents, who clearly disagreed with him to the point where they would even rebuke him on Facebook for his vote for Barack Obama in 2008. His father, Tod Miller, who on Facebook, said, “Remember who followed and campaigned for Obama! Your rebellion has no limits my son.”

Miller claimed to not be “awake” at the time of voting for Obama. Clearly, he was still asleep when he engaged in his 30 minute revolution that left him and his wife dead, along with policemen.

I’ll give credit to his father for calling his son out. Most dads these days would be coddling their kids, accepting all sorts of rebellion and perversion. This father wouldn’t do that.

Miller was also arrested for dealing marijuana. However, after convictions in 2007 and 2010, his family continued to offer little sympathy for him, continually pointing out that he should take responsibility for his own actions.

His grandmother, Carol Webberly, wrote “Shame on you Jerad!!!! And WHY are they testing your pee??? did they FORCE you to do drugs???? and the actions from drugs???? take responsibility for YOUR OWN actions and quit blaming others….. please!!!”

Instead of listening to his grandmother, he treated her with contempt, bashing her for being “ignorant,” and a part of a “brainwashed and indoctrenated (sic) generation.” Amanda stood by him in his rant too.

After his second conviction, Miller would write, “hopefully we can achieve freedom without killing the older generations off. it may come to that,” referencing the legalization of marijuana.

Nevada gubernatorial candidate David VanDerBeek said, “After meeting me and listening to me I am sure it was obvious to them that I was not violent. I will never know their reasons. They were not political killers, they were simply insane people who wanted to kill.”

I agree with VanDerBeek’s assessment, and I also see how these people have nothing in common with law abiding citizens that simply want the government to stay within the constraints of our founding document. It also makes me wonder if Miller’s prior convictions and ideology was his vulnerability to be used by LVPD as an informant. Remember, he was not an informant at the time of either of his convictions, but earlier this year.

More can be read at the Law Vegas Review Journal.

There is a difference between “small government” and “anti-government.” People like the Millers are “anti-government.” True patriots are those who seek to defend, not engage in violent, preemptive strikes. That is light years away from those of us who believe in small government and the media needs to tell the truth about this. Sadly, they won’t, so we must define it for them.